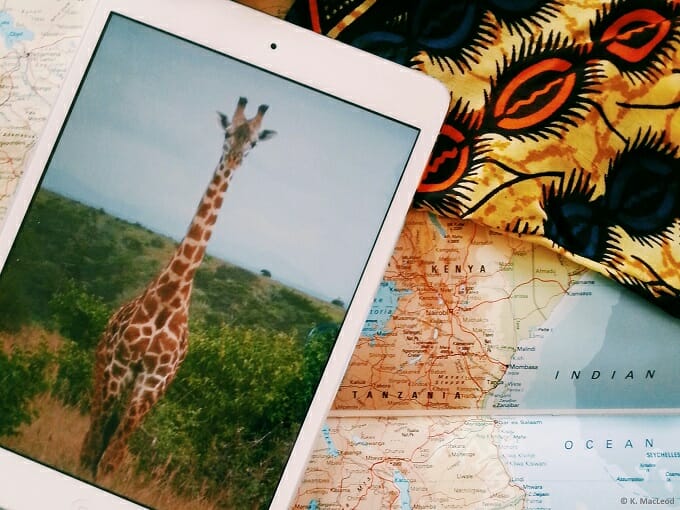 As I write, my body is back in Britain, but my heart and head are still in Kenya, still in East Africa.  The unexpected end to my 14-day-stay on the Kenyan coast has meant that the latter is taking some time to catch up with the former.

I’m still stuck in the streets of Mombasa, experiencing the chaotic rush of people and traffic, the hot, humid, stale city air.  I’m still strolling along the beach at Diani Sea Resort: the smooth, pearly sand lapped by the warm (sometimes wild) Indian Ocean, with palm trees and lights breezes and persistent curio-sellers, or ‘beach boys.’  My mind is still lingering on the wide grassy plains of Tsavo West, plains that stretch under an impossibly large sky to the horizon, and Tanzania even further than that.

We arrived at Mombasa International Airport early on a Tuesday morning in May – barely 5am – and the first thing I noticed was the heat, a thick damp heat that seemed to wrap its arms around us as we waited in the interminably long line for immigration.  At the desk, the official barely glanced at our papers, but was quick to get to the matter of money (Kenya has an entry and exit visa fee of £36 each way).

The next thing I noticed shocked me.

Outside of the airport, my first sights of Kenya were ones of poverty.  There were muddy, crowded streets stretching between small, low houses made from corrugated iron and bits of wood.  A family held hands as they walked barefoot, edging around a large, dirty puddle by a damp whitewashed wall.  The bus that first morning, full of British tourists, fell silent as it crossed on the ferry from Mombasa island to Likoni, a poor suburb of the city.

From the minute we exited the gates of Mombasa International Airport until we drew up outside Diani Sea Resort, over an hour south of the city, scenes like this played out again and again.  Reading about poverty on the news, or studying it during a political science seminar is one thing; seeing it first-hand on the streets in front of you is quite another.

According to UNICEF, despite steady economic growth, over half of Kenya’s population still lives below the poverty line – on less than $1 a day.  I couldn’t stop thinking about the barefoot children, or the women ploughing fields by hand in debilitating afternoon heat, babies wrapped on their backs.

But my lasting impressions of Kenya are not ones of poverty, and certainly not of despair.

My overriding impressions of Kenya are ones of smiles, waves, and warm welcomes.  It wasn’t the service-orientated friendliness of some countries, but a seemingly genuine warmth; a friendliness and happiness so pervasive it appeared to be a national characteristic.  Even those who by British standards had very little were full of smiles and laughs.

From the hotel staff and Diani shopkeepers, to our safari guide and locals on the streets of Mombasa, everyone smiled.  There were welcoming ‘Jambos’, continuous ‘Hakuna matatas’ (it really does mean ‘no worries in Swahili), and a relaxed pace of life, where almost everything was described with the phrase ‘poly poly’ (slowly, slowly).

The scenery was some of the most beautiful I have seen anywhere on earth; the weather was wonderful; and the food and drink was fabulous. But what really made me love Kenya was the people: because wherever you go in the world, it is the people who you meet that make the experience worthwhile.