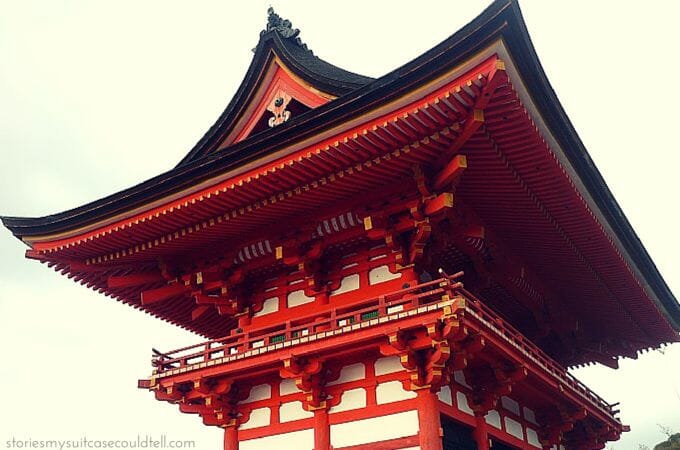 Despite the warning, I was disappointed. At first sight, Kyoto seemed like any other city: big, bustling and busy.  Where were the thousands of temples I had been told about?

There actually are thousands of them.  As Japan’s imperial capital for over a thousand years, Kyoto is king when it comes to historical sightseeing, home to 1600 Buddhist temples and several hundred Shinto Shrines.  We saw them slowly, first tiny ones tucked away in between tall tower blocks near our city centre hotel; then big and beautiful in the eastern reaches of the city.

As we wandered through Gion – still a working Geisha district – and up through the wooden-walled narrow streets of historic Higashiyama, we came across temples at what seemed like every ten steps.  We stumbled upon the Yasaka Pagoda, and by taking a chance turning up some old steep streets, ended up exactly where we wanted to be: the famous Kiyomizu-dera temple. It was big, bright and beautiful, and as we wound our way around to the famous wooden terrace, we were greeted with a wide open view of the city.

Around another corner we found the Jishu Shrine, a love shrine popular with young Japanese hoping for romance.  Walking blindfolded from one love stone to another one ten metres away would have brought us luck in love, but we decided we were lucky enough and settled for a photo instead. 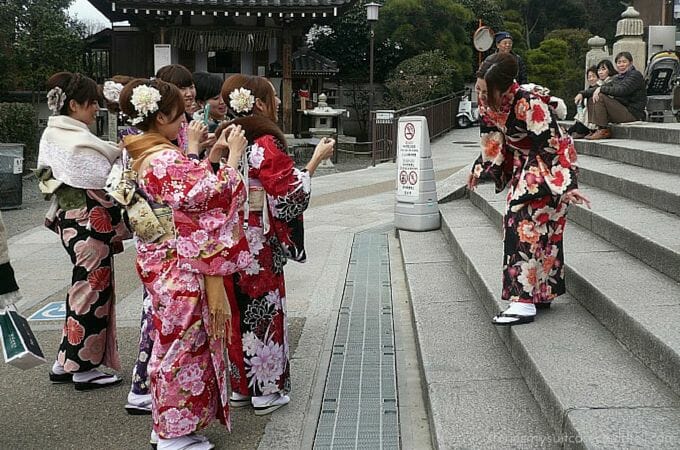 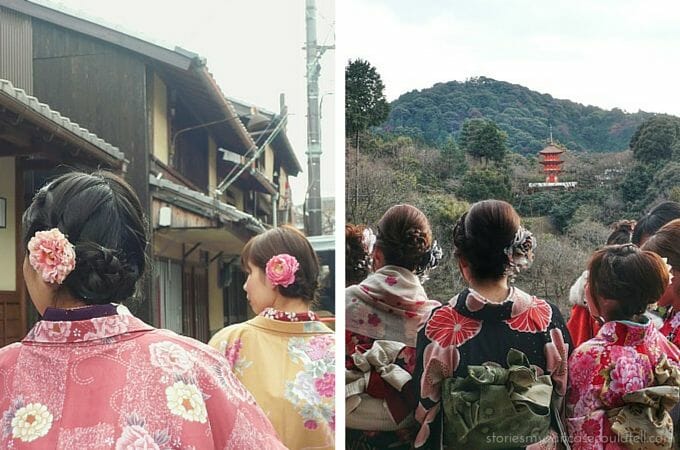 After the crowds – and countless kimonos – at Kiyomizu-dera, we took a different route down through Higashiyama, strolling by leafy gardens and undisturbed, incense-infused temples.  By evening’s approach, we had found our way out of the maze of alleyways and Buddhas, and back into the bustling real world.

Our second day started with an adventure in Arashiyama, where we rented bikes, breezed over bridges and soared down side streets.  There’s something special about seeing somewhere new from the seat of a bicycle: I’ve ridden on the ancient city walls of Xi’an, round West Lake in Hangzhou, the suburbs of San Josè, and now in the shadow of Arashiyama’s mountains.

We hiked the hill (it felt more like a mountain to my little legs) to the Iwatayama monkey park, and were met by free roaming Japanese macaque monkeys.  The bamboo forest across the Hozu River had been hyped as a highlight, but I have to say I was underwhelmed.

With time ticking, we took another train to Kyoto Station, and on to the much-anticipated Fushimi Inari Shrine.

The head shrine for the thousands of Inari across the country, Fushimi-Inari focuses on pathways that wind their way up the wooded mountain, lined each step of the way by imposing orange tori gates.

Some are small and skinny, others are high and wide, and all are engraved with Japanese characters.  We didn’t quite make it to the top (the Shinkanesen bullet train back to Tokyo was calling our names) but it was incredible – I could have wandered around there for hours.

Kyoto was beautiful, every bit the cultural wonder it is claimed to be, and I was in my element, discovering a city the way it is meant to be seen: wandering around with someone special, without knowing exactly where you are going.  After all, not all those who wander are lost! 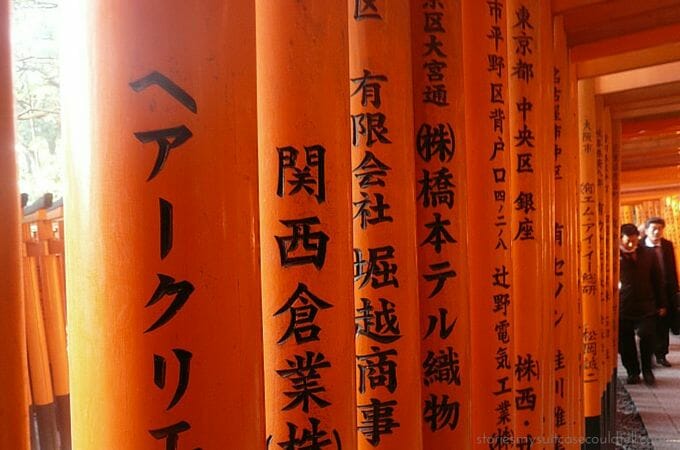 Have you ever been to Kyoto, or would you like to visit?