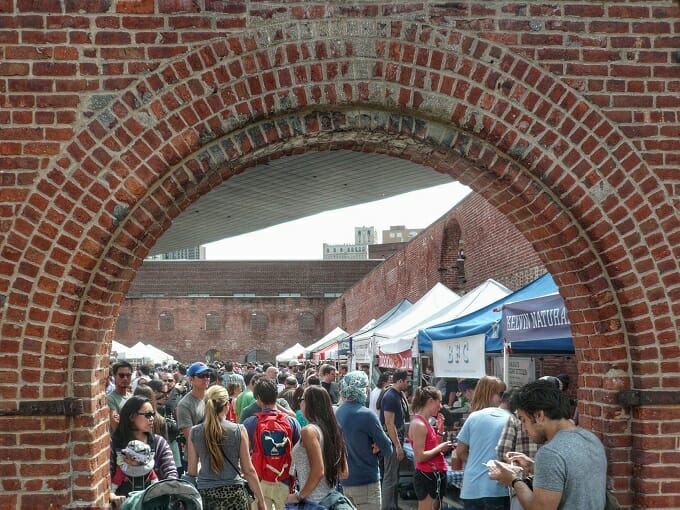 Smorgasburg, the food focused spin-off from the Brooklyn Flea Market, is a summer staple for anyone in New York City.   With over 70 specialist vendors selling everything from pork buns to brisket sandwiches, this is the perfect place for a picnic.

Last month marked the opening of the all-food flea market for the season.  It runs until November, leaving plenty of time to make the most of the meals on offer.  Saturday sees the flea flog its edible wares in Williamsburg; on Sunday the artisan eats can be found on Water Street in DUMBO.

While the Brooklyn Flea Market has been on the go since 2008, Smorgasburg only started in the summer of 2012, when the popularity of the food stalls prompted organisers to create a food-focused flea.  Since eats are more my thing than antiques, I was excited to try the treats on offer.

The markets are open “rain or shine”, and luckily we got the latter, arriving in DUMBO not long after noon.  Even before you take a bite, the location is enticing: the Brooklyn Bridge is right next door, the soaring city skyline straight ahead.  By the time we arrived, lines were beginning to snake around the stalls set up inside the Old Tobacco Warehouse, and early risers were already eating on the grass overlooking the East River.

Described by the New York Times as the “Woodstock” of eating, Smorgasburg was a complete culinary assault on the senses.  Where to start?  My initial reaction was to eat everything, but after a few steps – past cured meats, lobster rolls and giant doughnuts – I realised it wasn’t going to be possible (at least not in one afternoon).

So, first up were Vietnamese spring rolls, light and fresh and paired with peanut miso sauce and sips of iced Vietnamese coffee.  Next was Asia Dog, whose hot dogs with Asian-inspired toppings can also be found at their brick-and-mortar home in Nolita.  I opted for Asian sesame slaw, while my other half went for the Wangding: Chinese barbeque pork belly and onions.

Wanting to sample one more savoury stall, and with the line at Mighty Quinn’s Barbeque stretching the length of the open-air warehouse, we settled on Buttermilk Fried Chicken.  Ten minutes later we were presented with two chunks of crispy fried chicken, hot sauce, honey and waffles – certainly not a snack I would find back in Britain, but definitely a delicious one.

Finally it was time for dessert, my favourite find of the day.  The ice cream sandwich from The Good Batch was beautiful, a slab of creamy chocolate-peanut butter ice cream squashed between two chewy, macaroon-like cookies.

Smorgasburg will definitely see us again – it is surely the best place to be on a Sunday afternoon this summer. 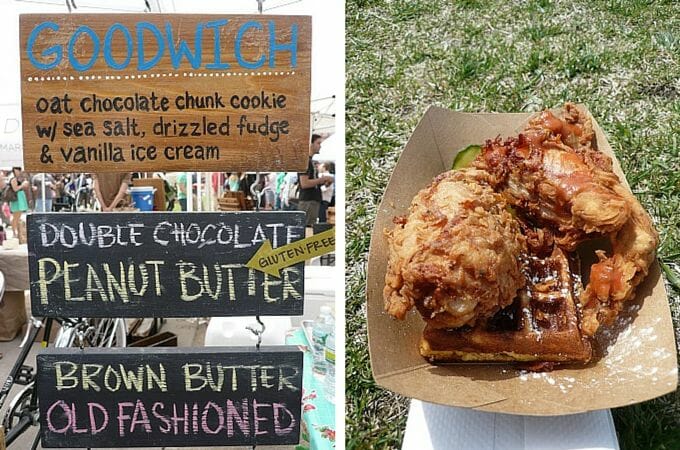 « Brooklyn Blossoms
A Long Weekend In The Windy City »