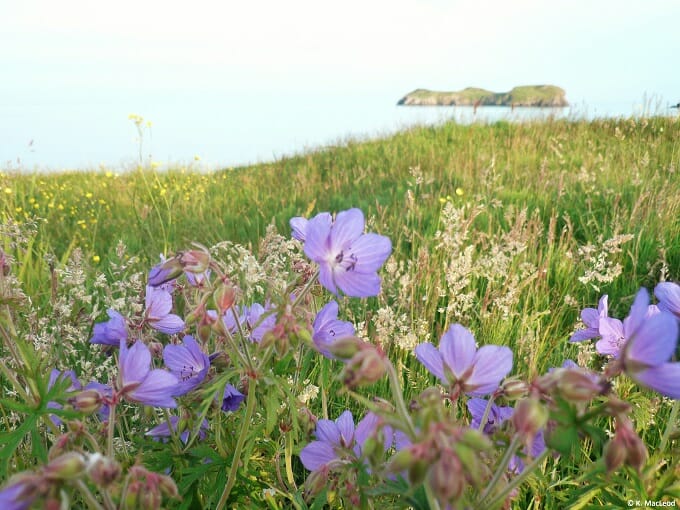 Look at a map of the Outer Hebrides, and you’ll be able to spot the little bit of land on the east coast of the Isle Lewis that juts out into the sea, a ‘thumbs up’ from the island to the Scottish mainland.

This is Point, also known as the Eye Peninsula (or An Rubha in Gaelic).

It’s joined to the rest of the Lewis by a small isthmus of land, the Braighe, and subject of many jokes from other areas of the island. While Rubhachs are staunchly proud to live on the peninsula, it’s often said by others that the thumb of land should be cut off and cast adrift into the waters of the Minch. (As a proud Rubhach, you can probably guess which side of the debate I’m on!)

Regardless of local loyalties, for visitors the Eye Peninsula – a mere 15 minutes from the main town of Stornoway – offers ample opportunity for a relaxed hour or two of exploring.

Park at the beginning of the peninsula (the eastern end of the Braighe) and you’ll be greeted not only with views of the Shiant Isles and the outline of the Isle of Skye, but the choice of two beaches, and spots of historic interest.

During medieval times, the Ui Church, was one of the most important churches in the islands. Perched on small cliff above the waters of Broad Bay, it’s a picturesque spot, and steeped in history.

Originally a cell of St Canan, a follower of St Columbus, it later became a burial ground for the Lewis Chiefs of the MacLeod Clan. Commonly known as St Columba’s, the church is in real danger of being lost to the sea; it’s currently being restored by a local community group, and visitors are free to walk around. 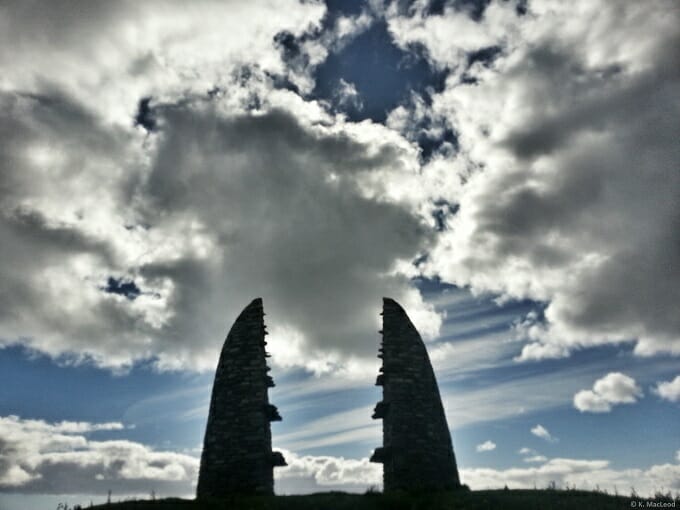 Here you’ll also find the memorial to the Aignish land riot. Two tapered stone monuments face each other, opposing stone teeth representing tension, all of it starkly outlined against the sky.  It was built in memory of the land riot of 1888, when local crofters took the law into their own hands in frustration at the years of exploitation at the hands of landowners. Similar memorials can be found in villages across the island, which all suffered the effects of the clearances that saw people forced off the land in favour of sheep.

A quick drive around the corner is one of the latest additions to the life of the Point peninsula: Buth an Rubha and Cafe Roo, the community shop and cafe that has become a lively local hub.

Housed in an old primary school building, this is where to stop and fuel up before exploring the rest of the area. The goose burgers have been flying off the menu at lunchtime, and I have to admit I’m partial to their bacon and black pudding breakfast rolls.

Coffees, teas, and cakes are all in abundance, and chances are you’ll spend a little longer here than expected. As a Rubhach, it’s impossible to pop in for a quick coffee because you are guaranteed to see someone you know – a neighbour, a relative, someone who knew your grandparents – and the quick visit will turn into a leisurely catch-up of a conversation.

But that’s what’s so lovely about it: it’s a community space in the true sense of the world, and the warm welcome is extended to locals and visitors alike. There’s a burgeoning historical society here too, with artefacts are currently on show in the old school hall, and you’ll find plenty ideas on where to head next, from coastal walks around the cliffs to archaeological finds.

Another personal favourite is Bayble Beach, a small sandy beach that overlooks the Minch and across to the mainland.

In the summer, you’ll find teenagers pier jumping, children paddling, and  families enjoying picnics. In the winter it’s empty, but no less beautiful with the drama of the waves crashing on the sand. It’s a spot with a rather special place in my heart: the site of childhood attempts at building sandcastles, one of after-school teenage excursions with friends, and the best place for a brisk walk before a Sunday roast at home. 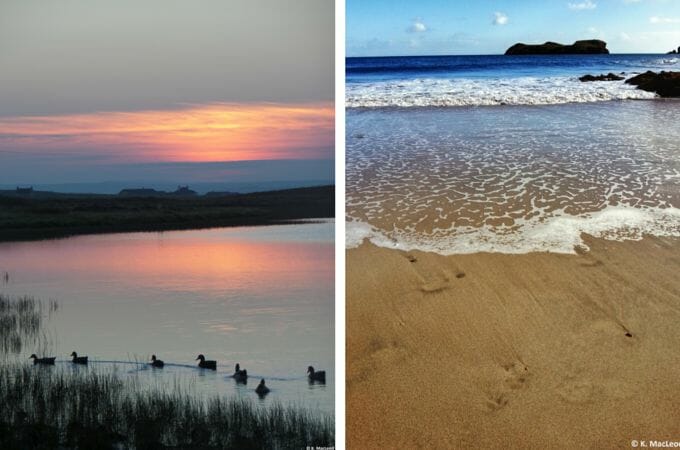 At the very tip of the Eye Peninsula is Tiumpan Head, where the lighthouse flashes its warning nightly.

It is also an official sighting spot for the Whale and Dolphin Conservation group. When I spoke to the organisation’s head of policy a few summers ago, she described the Minch (the body of water between the Western Isles and the Scottish mainland) as “incredible” for whale and dolphin spotting, and Tiumpan Head as “one of the best places in Europe for land-based watching.” While I haven’t spotted one myself, sit here in the summer with a picnic and a pair of binnoculars for long enough and you might just get lucky.

Perhaps one of the best things about Point is that it is a peninsula.

Here, you are never far from the sea, and where there is water there is nearly always beauty. On clear days you can see the shadowy Harris hills, the dramatic outline of the Isle of Skye, and even the snow-capped mountains on the Scottish mainland. Enjoying a cup of coffee at the kitchen table while the sun slowly rises above the mountains is surely one of the best ways to start the day.

So if you do make it to the Outer Hebrides, and to the Isle of Lewis, don’t neglect the often overlooked Eye Peninsula; you can be sure of a warm welcome from the locals, and plenty to keep you busy for an afternoon of exploring. And if you do cross the Braighe to Point, remember to let my fellow Rubhachs know I was asking for them!

Have you ever been to Point, or would you like to visit? Let me know in the comments below – I’d love to hear from you!