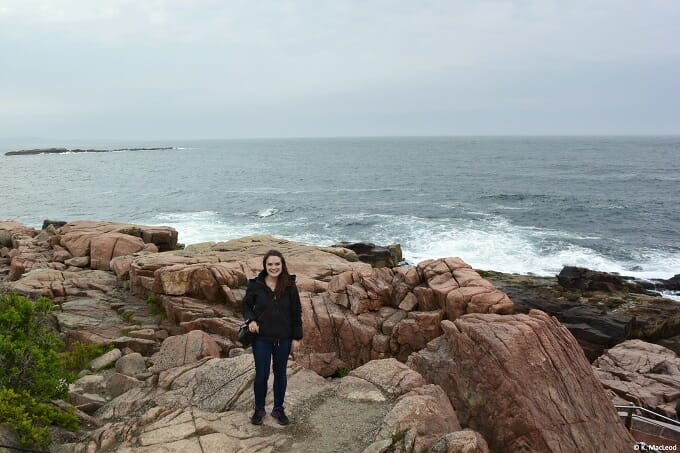 What do you do when you only have 24 hours in one of America’s most popular national parks?

See as much as you can, of course – despite the wind and the rain.

As we drove across the bridge from the US mainland to Mount Desert Island in Maine, where Acadia National Park is located, the rain started to fall.  By the time we stood at the peak of Cadillac Mountain, the island’s highest point, the weather had taken a turn for the worse.

My cousin had to hold onto me as we braced ourselves against what were winds of at least 50 miles an hour, watching as clouds of fog hurried through the air in front of us, before we stumbled back to the waiting car.  It was a little nerve-wracking, and in a perverse sense almost comforting: given the only other place I’ve experienced wind that strong is on Lewis, it reminded me of home in the strangest of ways.

Less than half an hour earlier, we had stood, rather smug, by the banks of Jordan Pond.

Having stopped for a quick lunch in Southwest Harbour, we made straight for the heart of the park itself, hoping to cover the ‘loop’ road before sunset, and Jordan Pond, famous for its restaurant and pop-over lawn parties, was our first stop. 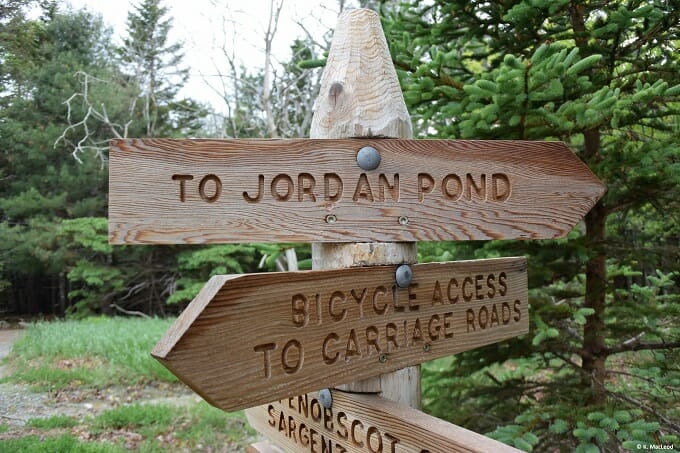 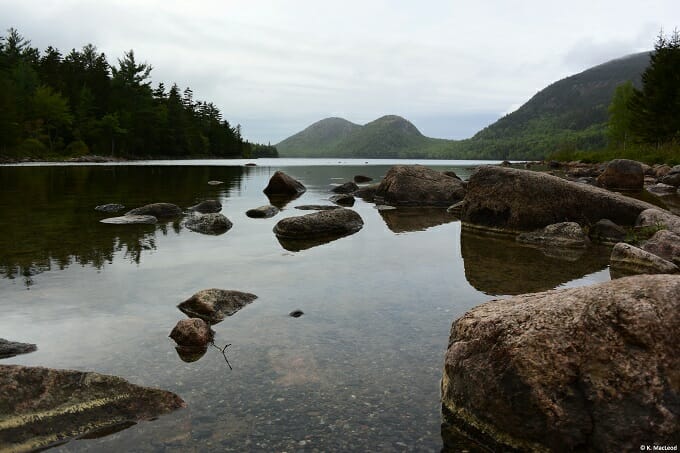 We chatted briefly with a lone cyclist, who was also contorting himself into strange shapes to capture the perfect photo.

He let us know that he’d been battling fog billowing past at 50 miles per hour at the top of Cadillac Mountain. As he said this, the sun started to break through the clouds, reflecting off the glass-like surface of Jordan Pond. What wind? It was calm, peaceful, and picturesque.  We were lucky to have escaped the worst (or so we thought).

Of course, an elevation of more than 1500 ft makes all the difference, and I was lucky to not be lifted off my feet. The highest mountain on the east coast is famous for its far reaching views, but aside from a brief glimpse of Bar Harbour, the island’s main town, the mountain wasn’t giving up any of its secrets that day.

Back at ground level the weather wasn’t quite as severe, and as we drove through the pine trees, small rays of sunlight slipped past.

There was something peaceful about being in a forest, but as an islander, I crave the coast – and I was about to get it.

Because of all the pine trees, I couldn’t really see what we were walking towards until it was underneath my feet: a beach.  An empty sandy beach surrounded by cliffs and crashing waves. A beach that was rugged and wild, unspoilt and scenic, in all the ways a beach (in my mind) should be.

It turns out that the Jersey Shore hadn’t satisfied my yearnings for the sea after all – but Acadia National Park’s Sandy Beach certainly did.  I stayed for a while, alone, walking by the ocean’s edge, getting close to the red granite rocks that Acadia is famous for, and breathing in that lovely salty sea air. 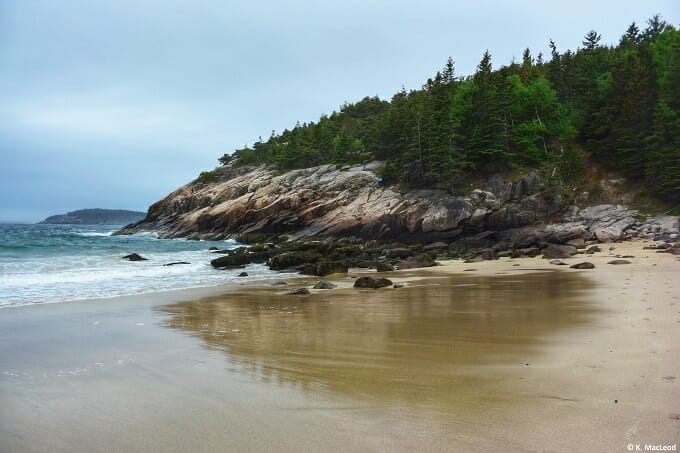 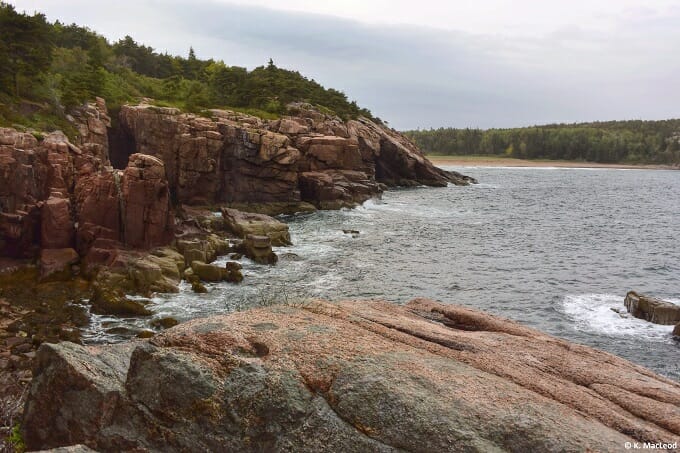 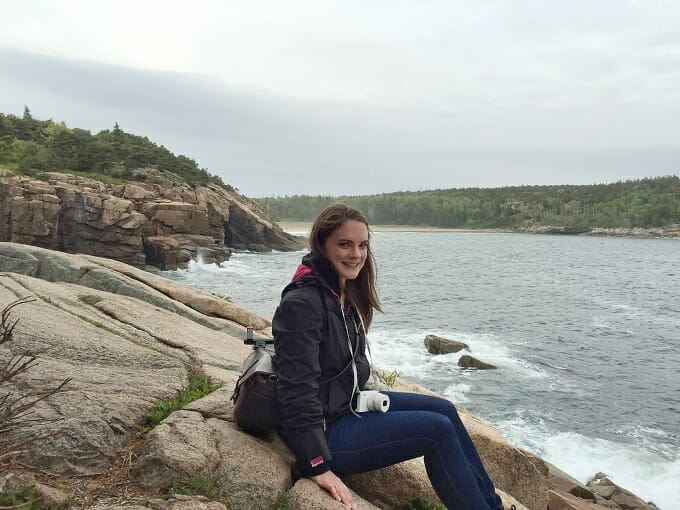 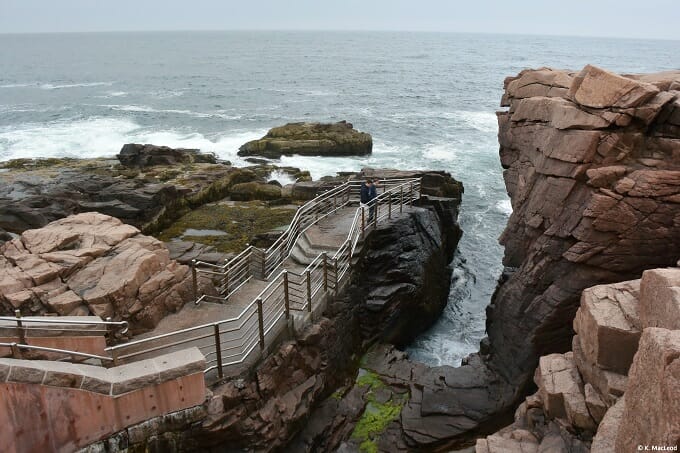 I was about to get even closer to those red rocks.

A five minute drive later, and my cousin – who’s visited Maine many times before – was showing me along a little cliff path that led to the edge of the rocks, and the dramatic view along the coastline to Sandy Beach.

Scooting towards the edge, with my camera in a vice-like grip, I was terrified. Really terrified. I’m glad I pushed the boundaries of my comfort zone though, because the views ( and, ahem, the blog photos) were more than worth it.

With the park closing at sunset, we managed to squeeze in one last coastal stop before making our way back to the hotel, near Northeast Harbour.

This was the infamous Thunder Hole, where before and after high tide, the waves crash against the rocks in such a way that the resulting noise sounds like thunder.  It wasn’t even high tide when I stood above the crevice, but the noise was loud enough to make me jump –  I can only imagine what it sounds like at the right moment.

We woke up extra early the next day – we only had a few of our 24 hours left, after all – to a misty morning view of Northeast Harbour.  Determined to see as much as possible, we made our way to the main town of Bar Harbour for breakfast, where we grabbed bagels and scones from Morning Glory Bakery to eat on-the-go. 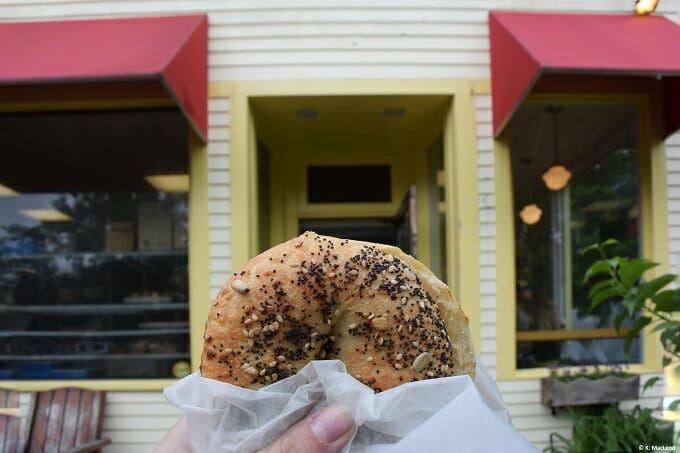 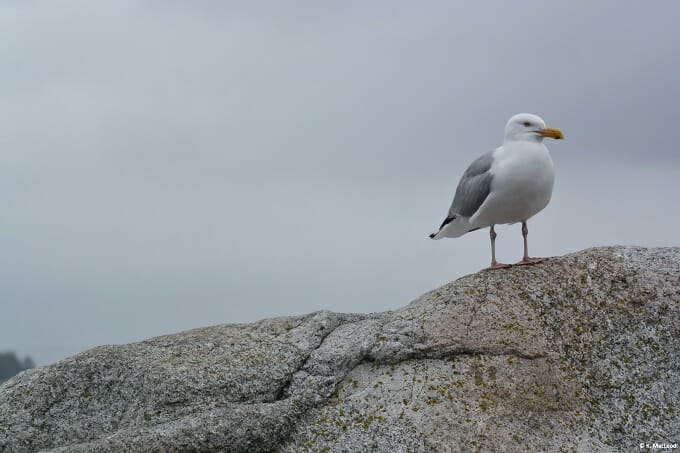 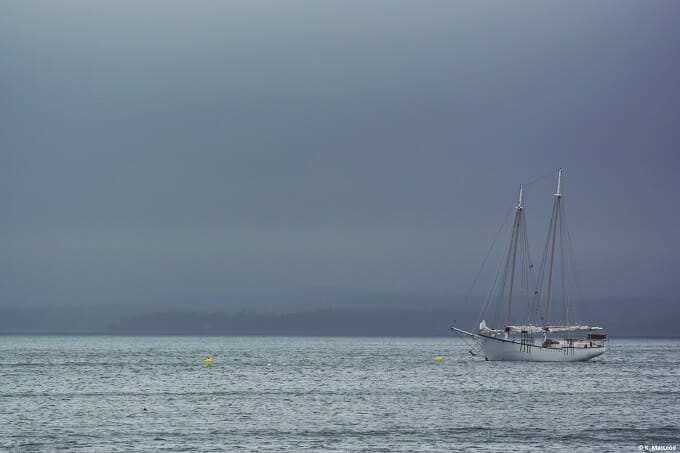 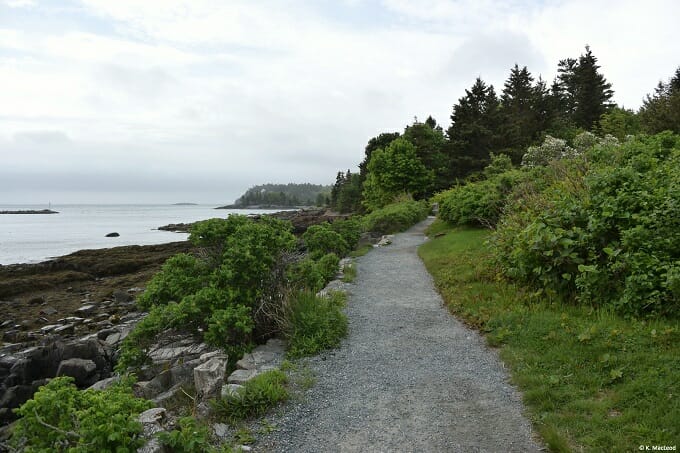 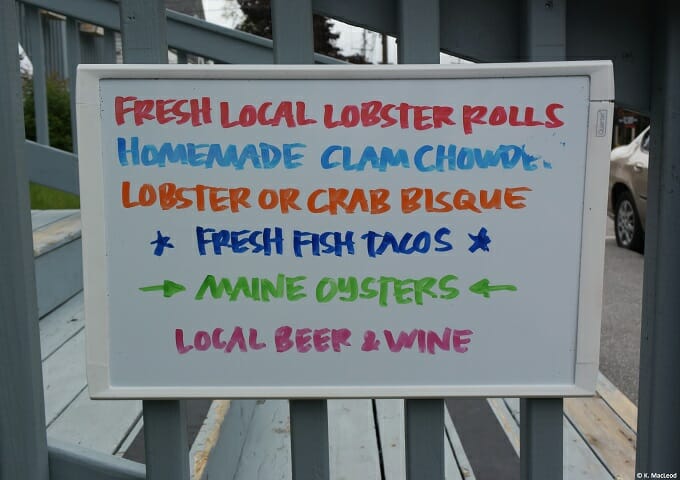 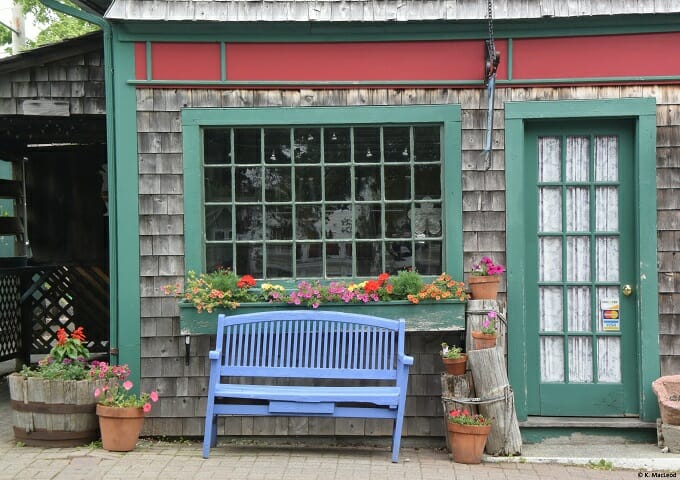 It was overcast but warm, and I had to shed my jacket as we navigated the coastal path and kept birds at bay (they were clearly fans of the bakery too).

Information boards with historical anecdotes were dotted along the path, and provided an entertaining look at days gone by in Bar Harbour: our favourite was the grounding of a cruise ship on a nearby island (with no casualties), due to the excessive “alcoholic merriment” of the crew and passengers.  If I remember correctly, the alcoholic merriment even continued after the crash!

Our final stops were two small slices of solitude and relaxation: the Asitcou Azalea Garden, and the Thuya Garden, located just outside Northeast Harbour.  The former felt like a outpost of Japan in the States, full of carefully manicured lawns and pristinely raked stone paths.  The latter, at the top of a maze of terraces cut into the granite hillside, was full of flowers, grasses and miniature paths that led to almost-secret gardens; I thought of the Francis Hodgson Burnett novel more than once.

And that was it.

After squeezing in Southwest Harbour, Jordan Pond, Mount Cadillac, Sandy Beach, Thunder Hole, Bar Harbour, and the gardens of Asticou, we grabbed our bags and, like Cinderella, set  off as the clock struck 12 (noon, in our case).  Our jam-packed, fun-filled 24 hours was up, and it had been just the right amount of time for an introduction to Acadia National Park. 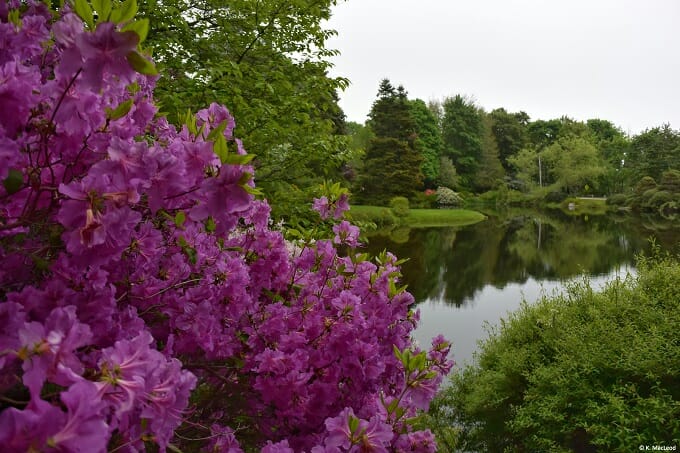 How do I get there?  Acadia National Park is roughly 260 miles from Boston, Massachusetts, and 50 miles from Bangor, Maine, so the easiest way to get there is to drive. Parking is only allowed in designated areas, but there are free shuttle buses to transport you around the island during the summer months, to help with traffic congestion.

Have you ever been to Acadia National Park, or would you like to visit? Do enjoy visiting National Parks like these?