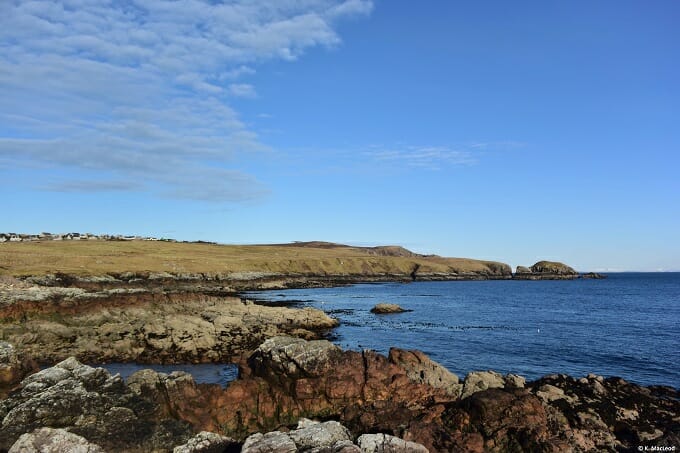 What happens when an expat goes home?

I had expected something momentous.

It had been 15 months since I had stepped foot in the Outer Hebrides. Despite my travels and stints of living abroad, I had never spent longer than a year without ‘going home’, at least for a visit.  Then I moved to the USA: a long arduous process that meant once I arrived, I wasn’t allowed to leave for nearly a year.

Not a day went by in those 15 months that I didn’t think of home. Not because I was homesick – although there were days when that reared its head – but because I couldn’t not think about it.  The Isle of Lewis is the place I grew up in, the place in which I’ve spent most of my life, the place where the majority of my loved ones live.

So yes, I expected something momentous, some dramatic emotion to arise as the plane bumped onto the runway at Stornoway earlier this month.  In the end, it wasn’t momentous at all (except for the fact that sun was shining – now that is momentous). What it was, was utterly and completely familiar – and I couldn’t have asked for anything better.

“How does it feel to be home?” The question was posed again and again; islanders will nearly always call the place ‘home’, no matter where they now live, or how long they’ve been gone.  My answer? “It feels as if I never left.”

Returning to Lewis felt like slipping on a well-fitting glove.

Chatting with my family at the kitchen table, catching up with friends, popping into Delights for a coffee, going for a walk on Bayble Beach – it was as if I’d been doing this all along, without that 15 month break.

I ate toasted Stag Bakeries bread every day for breakfast (and when that wasn’t on the menu, it was because I was eating a breakfast roll of bacon, Stornoway Black Pudding, and potato scone). I ate a lot of Cadbury’s Mini Eggs (it’s nearly Easter, after all) and more than a few Empire Biscuits. I ate my much-anticipated fish and chips, as tangy and soft from salt and vinegar as I had hoped.  I even tried guga, and Mr Stories My Suitcase Could Tell ate the entire thing (but that’s a story for another blog post!).

I drank in the open skies and the stars and the fresh air (because all of these are in short supply in NYC).  I slept soundly, without waking, every single night; I suppose that’s what nature’s silence does to your sleeping patterns.  I visited new shops and distilleries and restaurants, and found my way back to old favourites too.  Beaches were high on the agenda: how had I never visited Huisinis before?! 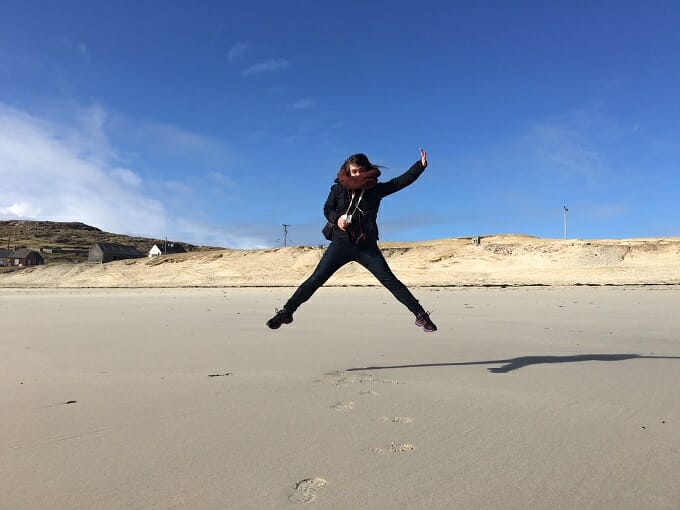 Food and fresh air aside, I realised in the quiet moments that returning to the Outer Hebrides was momentous after all.

The little moments in life always are.  There was the pride I felt at seeing my little brother in action as a teacher, and the easy banter at home between him and my husband. There was the simple joy of coffee and cake with my parents, and the laughs that come with conversations with old family friends.

In reality, no amount of WhatsApp messages can make up for sitting with your best friend on the couch, eating chocolate, watching a movie, and losing track of time because you’re talking too much.  No videos of a toddler’s antics can replace the sheer joy of seeing the two-year old, who you last saw when they couldn’t walk, reaching out their hand and saying “Come on Katie!”

When I booked my flights, three weeks felt like a long time. When Mr Stories My Suitcase Could Tell and I landed in Stornoway, the three weeks seemed to stretch out endlessly in front of us.  But then time seemed to disappear at a rapid rate.  I wanted to see everyone, go everywhere, do everything, and time just slipped away.

Saying goodbye is never easy, but it helps when you have another home to return to.

There was something comforting about the approaching Manhattan skyline on the drive from the airport, about opening our front door, about fitting my new island acquisitions onto bookshelves and into cupboards. (I even requested a burger as my first meal on my return – clearly I’m acclimatising!)

So rather than sadness at the goodbyes, I’m grateful. Grateful that as an expat I’m lucky to have two homes in two of my favourite places in the world, and grateful for life’s little momentous moments, whichever side of the Atlantic they occur on.

What does ‘home’ mean to you? How do you feel when you return to the place you grew up in?

Notes on Going Home (Again): A Week in Lewis and Harris

« Thoughts on Donald Trump, the BBC, and the Isle of Lewis
The Outer Hebrides: A Travel Video »