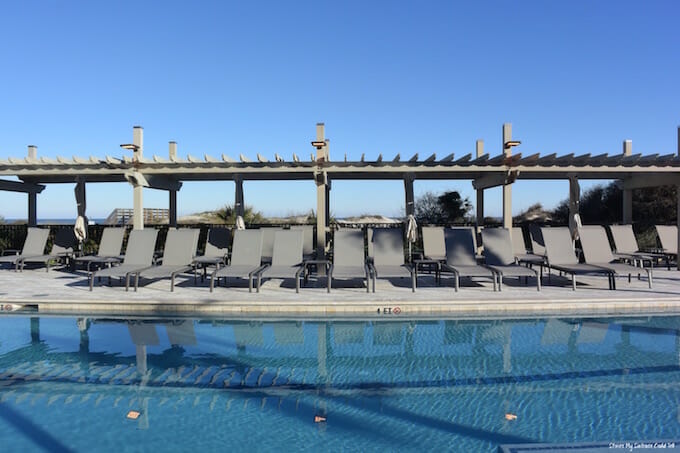 Everyone kept telling us that Jekyll Island, one of Georgia’s barrier islands, was unseasonably cold for the time of year.

Early December on the Georgia coast is usually comfortable and mild, so although my husband and I had just missed the first winter snowfall in New York City by a few hours, it seemed that some of the cold snap had followed us south. It was lucky for us then, that we had the Jekyll Ocean Club to relax in when the weather proved a little too brisk.

Located right on the beach, Jekyll Ocean Club was my idea of heaven (as an islander, there’s little I enjoy more than being by the sea). In fact, the first thing I noticed when we entered our king suite was the ocean: thanks to the floor-to-ceiling sliding doors and private balcony, we had uninterrupted views over the protected dunes, the strip of white sand, and the waters at its edge. 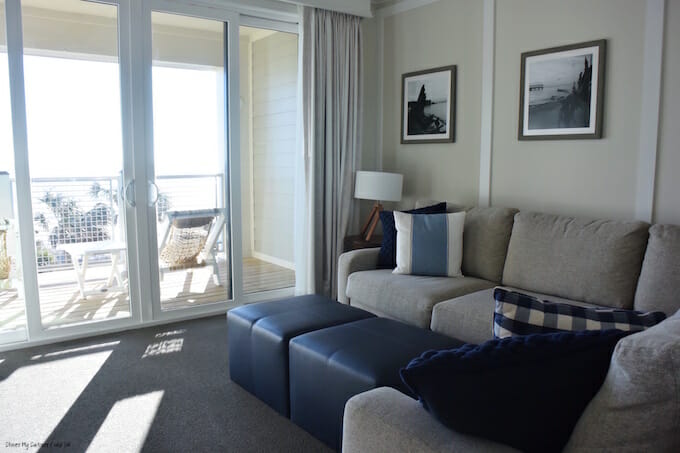 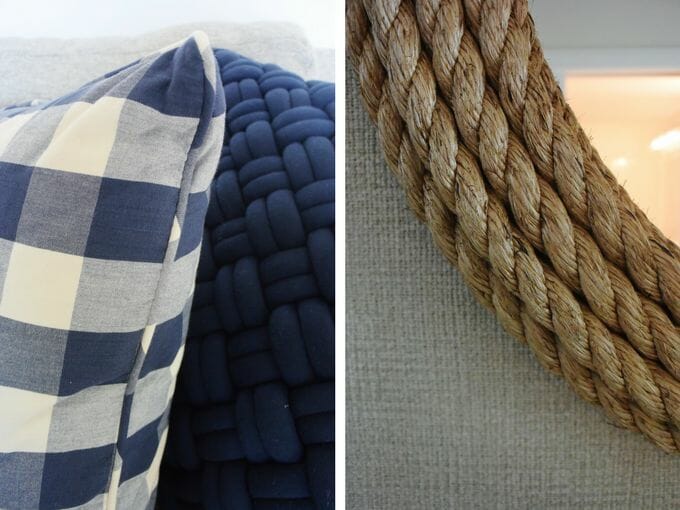 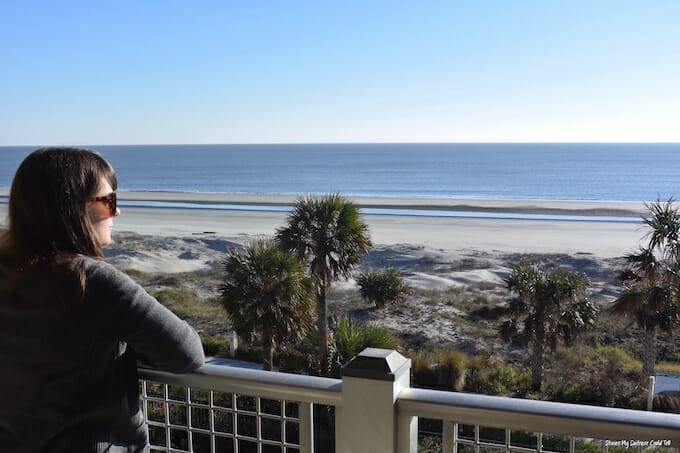 When I finally managed to tear myself away from the balcony, I was able to take in the rest of our home for the night. The suite was bright and airy, and not just because of those patio doors. Taking inspiration from the island, the space felt very coastal, decorated in whites, blues, and light-toned wood. From little seafaring touches like a rope-lined mirror, to dramatic framed prints of local Driftwood Beach, it seemed that every design detail had been thought of.

But the Jekyll Ocean Club is more than a boutique hotel; it’s a new chapter in the storied history of the island itself, and its sister hotel, the Jekyll Club.

Until the 1940s, Jekyll Island was off-limits to the public. Since 1886, the island had been the playground of an exclusive club of some of the USA’s wealthiest families. Here, they escaped the winter cold of the north-east, relaxed in their private cottages, dined at the Club, and competed in sports like hunting, horseback riding, and golfing.

The Club began to decline during the Great Depression, when members started leaving due to the cost of membership. During World War II the government evacuated the residents because of U-boat activity off shore, and the Club finally closed in 1948 when the state of Georgia took over the island and designated it a State Park. 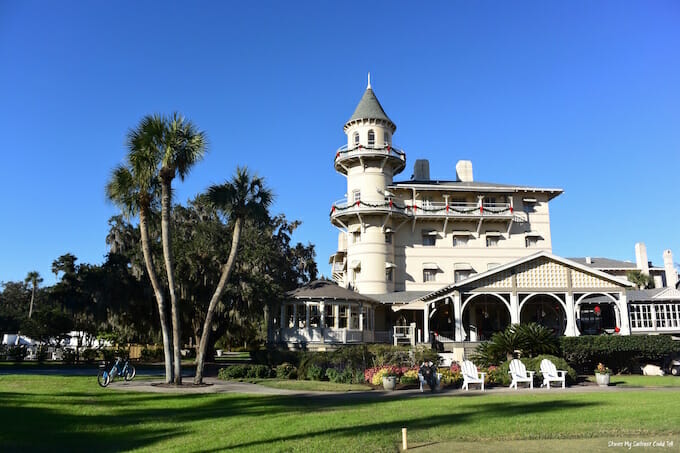 Today the elaborately designed Club house, once the private holiday realm of Rockefellers and Vanderbilts, is the Jekyll Island Club Resort, open to anyone looking for a relaxing break on the Georgia coast. Guests can stay in the original Club house itself, which reopened in 1987, or even in one of the “cottages” built by individual families. (Imagine staying in one of the country’s first condo buildings, once part-owned by J. P. Morgan?)

Now, you can stay in the Jekyll Ocean Club, too. The latest instalment in the Club’s history, opened earlier this year, offering holidaymakers a stylish ocean-side location with access to all the amenities offered at the original Club, too, taking in everything from bike hires to croquet games. 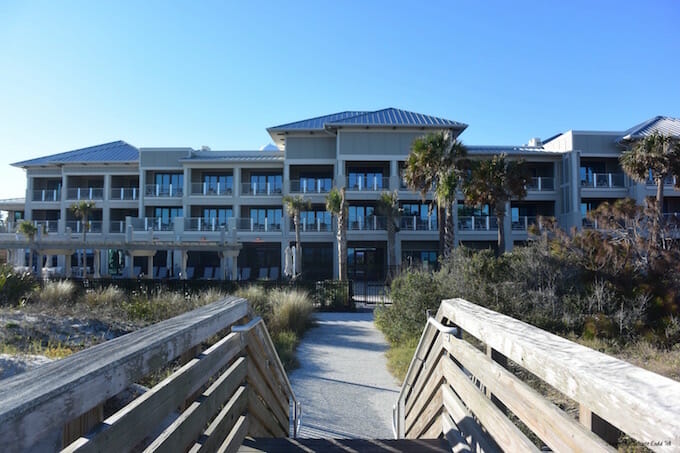 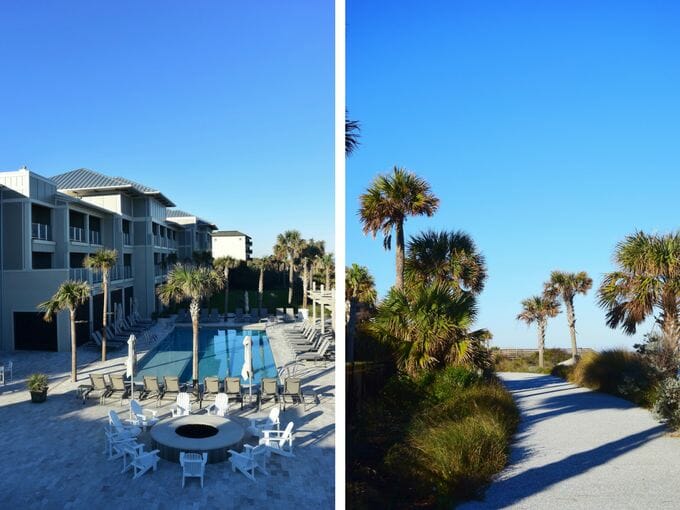 A hotel with an ocean view and generations of stories to be uncovered? I was sold.

After relaxing in the spacious Ocean Club lobby – I was so cosy on the couch next to the open fire and Christmas tree that I almost fell asleep – we decided to check out the older sister hotel, which was easily done thanks to the free shuttle bus service between the two locations.

We admired the sunset over the marshy river that separates the island from mainland Georgia, and strolled under the sparkling live oak trees decked out for Christmas, before surrendering to the cold and heading inside for something strong to warm us up. 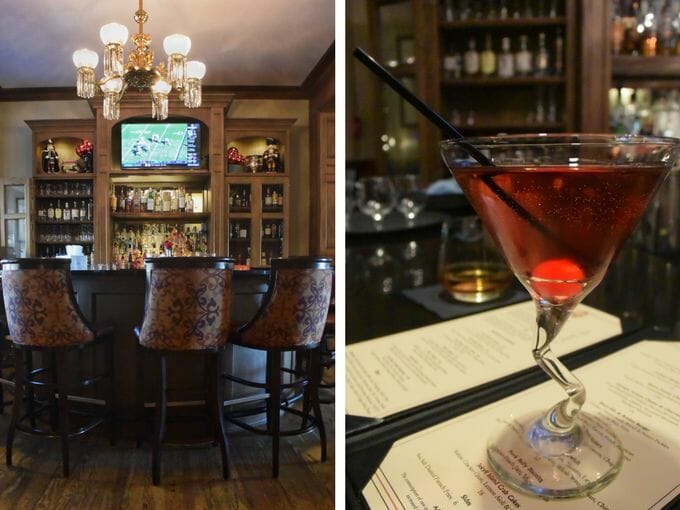 The Lobby Bar was as old-school and elegant as you might imagine a former private club from the turn of the 20th century to be, all dark wood-panelled walls, leather armchairs, and crackling open fires. We made ourselves comfortable at the bar with our cocktails, nibbling on fresh crab cakes and pork belly biscuits, and chatting with other hotel guests. Back at the Ocean Club, we did the same, and stopped by the Corsair bar before heading outside to the fire pit.

Just as enjoyable as the cocktails were the conversations that accompanied them throughout the evening, not only with the bar tenders, but with the locals as well.

There were the two elegantly dressed grey-haired women who had driven over from nearby St Simons Island for an evening drink; the couple born-and-raised in New Jersey who first visited the island three years ago and never left; and the Wall Street banker-turned-writer who retired to Savannah but can’t keep away from Jekyll. The island, it seemed, had a magnetic pull on them all, and we were starting to see why.

Cocktails finished, we rounded off the night with the perfect cosy winter activity: toasting marshmallows and making s’mores at the hotel fire pit. My marshmallow toasting skills are clearly as lacking as my kitchen ones, since I managed to burn all my marshmallows – but luckily they still tasted good smashed between crackers and smothered in chocolate. Laughing and making s’mores over a fire pit by the ocean at midnight was the perfect way to end our day at the Jekyll Ocean Club, and the perfect way to start our winter holiday.

Thanks to our ocean front suite at the Jekyll Ocean Club, we woke up the next day to sunrise over the sea.

It began as a hint of deep bronze that swelled to swathes of pink and finally transformed into a blaze of gold reflected on the water. It was so lovely that I stood outside on the balcony in just my dressing gown and bare feet, listening to the rhythm of the waves and watching the morning sky arrive. 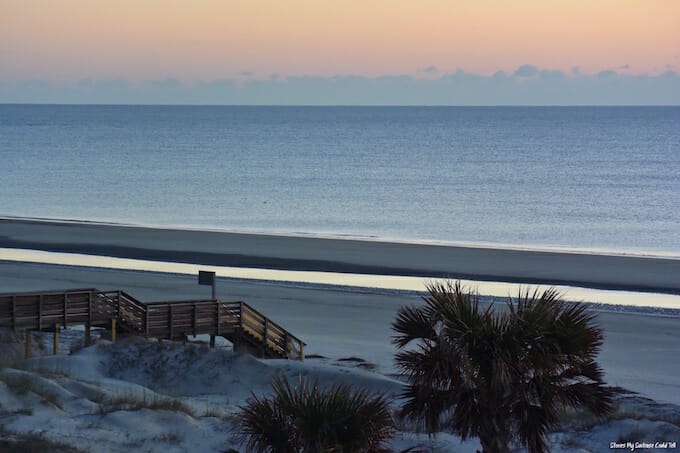 But after a feast of a breakfast at Corsair, a stroll on the beach, and a bit more lounging on those squishy oversized couches by the fire, it was time for us to check out and say goodbye.

We came to Jekyll Ocean Club to start our Southern holiday off with some relaxation, but found that and so much more.

We found not just beautiful scenery, but fascinating history, a friendly welcome, and fun dining (who can resist midnight s’mores and cocktails?). You can bet that when the weather warms up, I’ll be following in the footsteps of those historic families and heading back to Jekyll Island. Who knows, maybe my marshmallow toasting skills will have improved by then…! 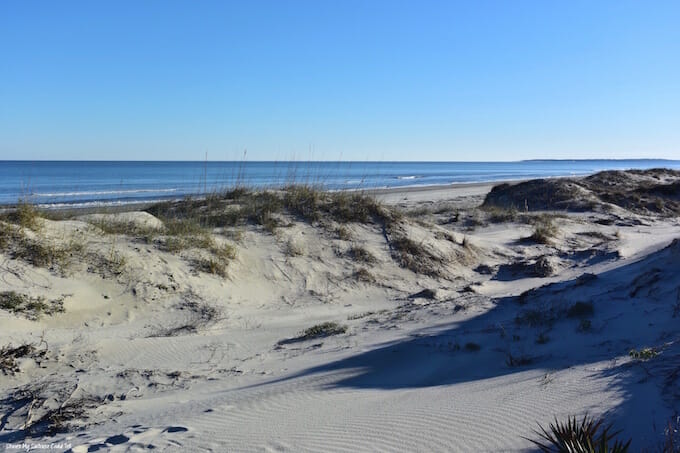 How do I get there? The easiest way to get to Jekyll Island is to drive. It’s about an hour away from Savannah by car, and once you reach Jekyll Island, you’ll pay a $6 State Park entry fee before driving across the causeway. It’s easy to find the hotel by following the sign posts – the entire island is only about 7 miles long.

How much does it cost? Prices vary depending on the day of the week and the time of year, but at the time of writing a stay at Jekyll Ocean Club ranges from $170 – $360 a night.

Have you ever stayed somewhere with an intriguing story like the one at Jekyll Ocean Club? Would you like to visit Jekyll Island, or have you been before?

Many thanks to the Jekyll Ocean Club for hosting us during our stay on Jekyll Island. As always, all opinions – and love of ocean views, history, and s’mores – are entirely my own.

« My Travel Plans and Dreams for 2018
Getting To Know Jekyll Island, One of Georgia’s Golden Isles »