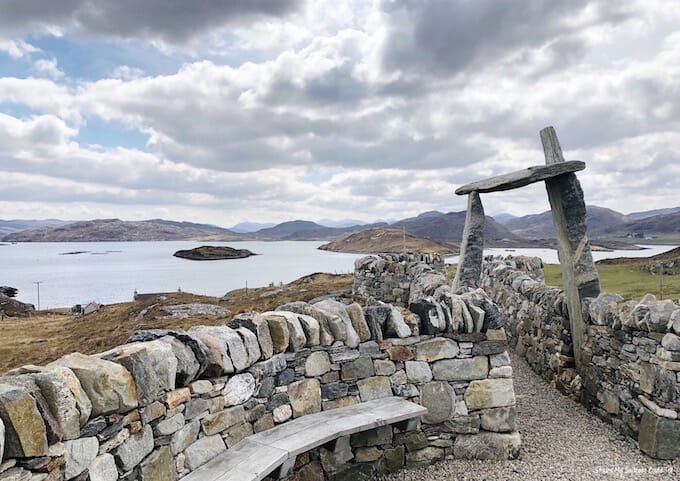 On a heathery hill on the Isle of Lewis, the northernmost island in the Outer Hebrides, stands a striking stone monument, an intricate archway that offers breath-taking panoramic views across the landscape.

An Sùileachan – which means ‘lesson’ in Gaelic – is an evocative memorial to the struggles of land reform and ownership in the village of Reef, one that looks to the past as well as to the future.

The fight for the rights of islanders to own the land they live and work on has been a long one. In the Highland Clearances of the 19th century, tens of thousands of people throughout the Highlands and Islands were evicted from their land and forced to emigrate, all to make way for the farms that wealthy absentee landowners could profit from.

The issue of land rights arose again in the early 20th century, when crofters returning from the First World War to promises of land had their hopes dashed, and so took direct action against the landowners with rent strikes and land raids, as the raiders in Reef did in 1913. An Sùileachan is a testament to their efforts.

Monuments like these are scattered across the islands, striking reminders of the risks islanders have taken over the years to gain the right to their land. Standing solo at the top of the hill in Reef that day, taking in the expanse of land around me, appreciating the significance of the history represented by stone, and noting the names of the raiders etched into the ground, it struck me that in some ways the issue of who has rights to use the land is one we’re still grappling with today.

Community trusts, like the one that constructed An Sùileachan, are popping up across the islands, as local communities buy out the land they live and work on from private owners.

In Stornoway, though, the story in 2018 is a complicated one.

The community landlord, the Stornoway Trust, came into being in the 1920s, when the then-owner of Lewis and Harris, Lord Leverhulme, gifted the island to the people of Stornoway. Today, that means that the common grazings (areas of land used by multiple crofters) around Stornoway are managed by the Trust, which is made up of a group of elected trustees who run the estate on behalf of the community.

In 2003, the Stornoway Trust awarded the lease of this land to a group going by the name Lewis Wind Power, consisting of major energy companies EDF Renewables and the Wood Group. The lease gave them the right to use the land for 80 years: for 45 years from the date of signing, and for another 35 years after that if they so choose.

As if the loss of community land for generations wasn’t bad enough, EDF were also given the go-ahead to build a large-scale wind farm on the land around Stornoway, a wind farm consisting of 36 wind turbines at a height of 145 metres each; if given additional planning consent, they are hoping to increase that height to 187 metres, which would make the turbines the tallest anywhere onshore in the UK. EDF also have backing to build 45 turbines on the border with Harris in Uisenis, on the privately owned Eishken Estate.

But why would the rights to develop and make money from the land be given to a multinational company, instead of to islanders and the community itself? It’s a question being asked by many, but in particular by four groups of crofters whose common grazings land will be taken over by these turbines: they argue they should have the right to build their own community wind turbines on the land, and in turn, invest the profits back into communities across the Outer Hebrides.

One such community scheme, run by the Point and Sandwick Trust, is already up and running. They operate Beinn Ghrideag, a three-turbine wind farm on the outskirts of Stornoway. As the largest community wind farm in the UK, it helps fund community projects across the island, and the Point and Sandwick Trust were recently named 2018 UK Social Enterprise of the Year for their work in operating a commercial business for social good. It is this type of community project the other four crofting townships are hoping to replicate, with 21 turbines on their land, in the same locations EDF have permission to build.

This issue of who can use the common grazings – the crofters or the corporations – is currently making its way through the Scottish Land Court, but the fundamental question of who has the right to use the land remains, for now, unanswered. 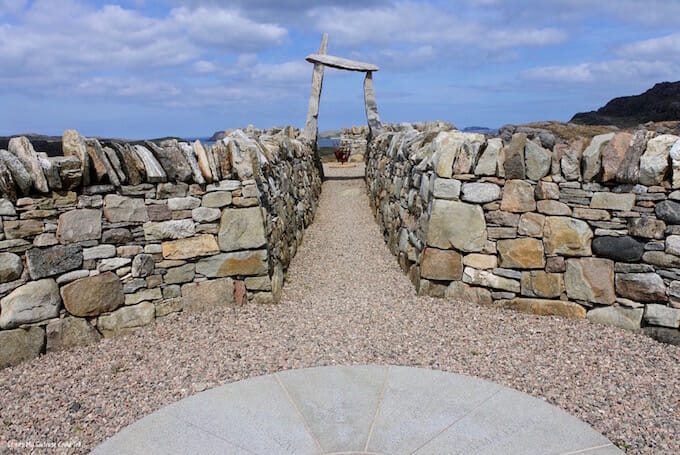 There are more questions to be asked, though, in addition to the one of whether a multinational company should profit from the land while locals receive a fraction in return.

There is the question of tourism, and how the wind farms will affect the arrival of visitors who contribute £65 million to the local economy, more than 70 per cent of whom say the scenery is their number one reason for visiting. The islands are only becoming more popular; Lonely Planet and AirBnB have both listed the Outer Hebrides in their guides to the “must-visit” destinations of 2019, citing the landscape as a draw.

In theory, EDF say their project will make £415 million for the local economy by 2050. Aside from the fact that there are limited details on how this would happen, or what percentage of profits the community would get, tourism at its current rate would make more than £2 billion in the same time period. But who will be visiting when the islands’ “natural splendour” is replaced by towering wind turbines?

And then there is what some consider the most important question of all, the question of the intrinsic value of the land itself, outside of its ability to generate profit for anyone. If this large-scale project goes ahead, the landscape of Lewis that I and many others love dearly will change drastically. Instead of dramatic skies above expansive moorland, the views that will greet visitors (and more importantly, locals) will be a sea of wind turbines – potentially as high as the Queensferry Crossing bridge in Fife, the tallest and most obtrusive onshore wind turbines in the country. The thought of that scene breaks my heart.

Yes, action needs to be taken to combat climate change. But is placing large-scale wind farms on a small island, where residents will have no respite from them, and in what can be argued is a special environment, the best way to go about it? Do you have to destroy the landscape to save it? I certainly don’t think so, and I’m dubious of the motives of anyone who claims it is.

The whole scenario reminds me of the debate over the super quarry proposed for the Isle of Harris in 1991. An English building materials manufacturer wanted to create the largest quarry in the country, reaching 600 hectares, at Lingerbay in Harris, in a designated National Scenic Area. The proposal was fought by the community, and eventually stopped.

I learned of it years later, as a student in a Sustainable Development class at the University of St Andrews. The students in the class sat listening in disbelief at the idea that anyone could have thought proceeding with this project was the right course of action. I was relieved then that the super quarry was a history lesson with a warning in a university class, and not a reality, and I think of it every time I drive along the east coast of Harris. What kind of lesson will these large-scale Lewis wind farms teach us in the years to come?

It’s probably clear that I am against any large-scale wind farm in this type of small community environment.

If smaller-scale projects are to go ahead in the Outer Hebrides, I feel they should be run and owned by communities themselves, to maximise local benefit. I also truly believe that these developments affect more than the individual crofters who fall under the Stornoway Trust’s remit. I believe they affect everyone who lives on the island, and I believe everyone, not just the representatives of certain Trust or grazing committees, should be consulted in a meaningful way. For a project that will alter the Lewis landscape beyond recognition, input should come from everyone – but so far, it hasn’t.

To me, it doesn’t matter what side of the political spectrum you’re on, or whether or not you’re a crofter. Anyone who cares about the economy, the land, and the landscape of the Isle of Lewis should be engaged in this issue, because if this EDF project goes ahead, for the better part of the next century, our land will not really belong to us. Yes, it may belong to us in name, but in practice, the rights to use the land will belong to a multinational company which will profit from the alteration of our landscape. In legal terms, this multinational company could already be our landlord.

As I stood by the stone monument on that heathery hill in Uig, clouds scudding across the sky, it seemed strange to me that we were still debating land rights in the islands, almost a century after the Reef raiders fought for theirs. It seemed staggering that given the long history of land struggle in Scotland, community land rights could be given away for so little. It’s enough to make you wonder if we’ve really learned the lesson, an sùileachan, of our history, after all. 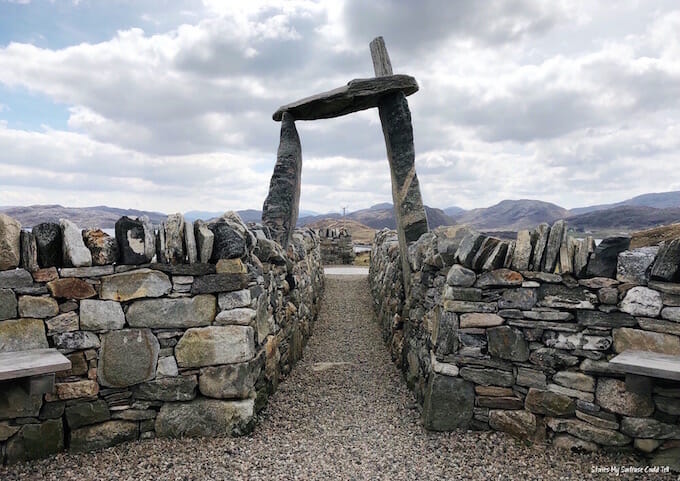 You’ll find plenty of reporting on the issue under the “Renewables” section of Hebrides Writer, a blog by local writer Katie Laing.

Outrage at bid to build tallest onshore turbines on Lewis, The Scotsman

Islanders divided over French energy giant’s blueprints for giant turbines in the Hebrides, The Sunday Post

« 4 Years of Expat Life in New York City
2018: The Year in Review on Stories My Suitcase Could Tell »