I may heart NYC, but last year I had a bit of love affair with Shanghai.  Many visitors to the Middle Kingdom prefer Beijing for the history, and while I am usually a culture vulture-type tourist, Shanghai immediately stole my heart.  What fascinated me most about China as a whole was the constant contrast between old and new, past meets present, in everything from architecture to education – and Shanghai seemed to boldly embody that contrast.

Take the district of Pŭdōng.  What is now the financial hub of the city (and country) was farmland a little over a decade ago.  An older expat I met on a spring visit to the city described cycling past farmers in fields where the the second-tallest building in the world now stands.  It’s little wonder that this year the Brookings Institution has Shanghai topping a list of the world’s most dynamic metropolises.

If the Shanghai skyline doesn’t scream “bright lights, big city”, I don’t know what does.  The perfect place to view this vision is from the other side of the Huangpu river, on the Bund, where buildings from the foreign concession era of the early 20th century would look equally at home on a London street.

The contrasts continue around every corner.  Shanghai is home to Asia’s largest shopping street, but is also the birthplace of the modern-day Communist Party, a spot now surrounded by outposts of capitalism – the upscale restaurants, bars and boutiques of Xīntiāndì.   Starbucks and McDonalds may line the main thoroughfares, but head just steps away from the centre and you can feast on fast food, street-style.

A contradiction in terms is Shanghai’s “Old Town”, updated so it seems almost a story-book version of its former self.  It’s worth a wander all the same.  In winter the classic Yùyuán Gardens don’t display their best, but spring is the perfect time to visit; the flowers are in bloom and you might just miss the smog.

From here it’s an interesting walk to the Antiques Market on Dongtai Lu: en route I spied laundry out to dry on electricity wires, headless ducks by a butcher’s doorway and a barber offering his services on the sidewalk.  Wherever you are in China, everyday life is played out on the streets.

If art is more your thing than architecture, 50 Mògānshān Road, a former factory site turned artist enclave, is worth searching for, hidden as it is out by the main railway station.  My first trip there was in the pouring December rain; when I returned in the April sunshine I bought the pretty photo print I’d regretted leaving behind the previous winter.  Don’t forget the French Concession, or the parks.  The latter are filled with dancing grandparents, wobbly toddlers and intense games of Chinese chess.

Shanghai is leading the way for the rest of China, but there is culture too among the commercialism.  I never expected to miss China, but I sure do miss Shanghai – and the city’s delightful dumplings. 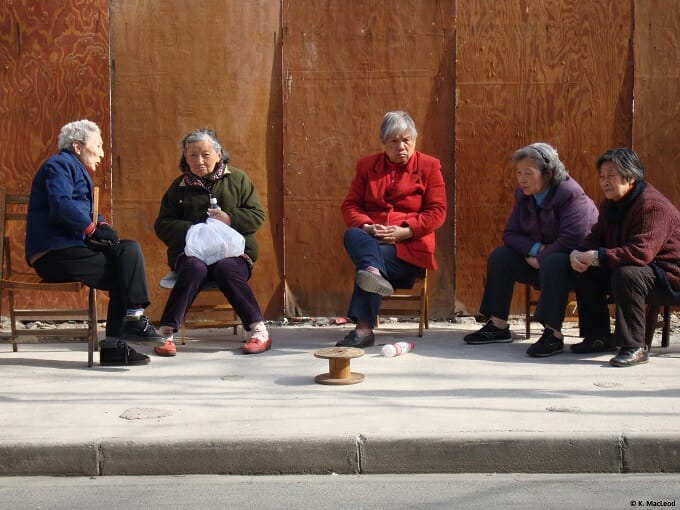 Drink: It’s a tough choice between the Hyatt Hotel Bars.  Opt for modern and edgy with live music at the Park Hyatt’s Music Room, the highest nightclub in the world; cool and collected at Cloud 9 on the 87th floor of the Grand Hyatt; or wrap-around windows with views at Hyatt on the Bund.  My advice? Indulge in a drink at all three.

Eat: The guidebooks may tell you to try the Nánxiáng Steamed Bun Restaurant in the Old Town, but it is overrated and overpriced. Yang’s Fry Dumplings are hands-down the best dumplings I have ever tasted (and during my year in China, I ate many of the doughy delights).

Dip the xiăolóngbāo in vinegar, and add some chilli sauce if you feel like a kick.  Easily accessible from the subway, you can expect to wait a while in line outside the tiny establishment, and even longer if you want a seat – but believe me, they are worth the wait.

Visit: Gaze into the future at the Shanghai Urban Planning Exhibition Hall.  Inside an impressive building in People’s Square you’ll find early 20th century sepia photographs sitting next to ambitious plans for the city.  The exhibitions give a real sense of how fast and how dramatically Shanghai has changed, and what lies in store for the years ahead.

An hour or two here will give you a timeline of the continual old-meets-new contrast that can be found across the country.  Further ‘futuristic’ thrills can be found in the Bund Sightseeing Tunnel, a theme park-style ride that transports tourists under the Huangpu from Puxi to Pŭdōng .  There may not be many ‘sights’, but what you do see will stay with you for some time!

« Get Packing: Travel Plans for 2012
Closeness Has Nothing To Do With Distance »