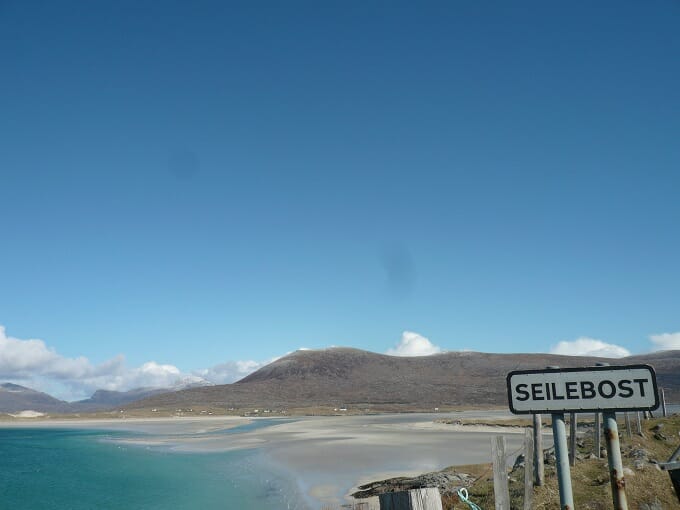 2013 has been named the ‘Year of Natural Scotland’, with scenic shots showing up everywhere from our TV screens to social media networks.  If it’s nature you’re looking for, then it doesn’t get more natural than the Hebridean Isle of Harris.  Even the BBC is in on the excitement, with its upcoming ‘Wild Scotland’ series which includes the four-part programme ‘Hebrides – Islands On The Edge.’

National tourism agency Visit Scotland calls the Outer Hebrides an “idyllic island chain”, and although I might be biased, I couldn’t agree more.  Strung out along the edge of the Atlantic, this archipelago is home to 26,000 people, the Gaelic language, and the heralded Harris Tweed.

While not technically separated from its northern neighbour the Isle of Lewis, Harris has its own distinct atmosphere, and everything the discerning traveller could hope for.  In the north, hiking is a popular pursuit; even I’ve climbed An Cliseam, the Hebrides highest mountain, which makes for majestic views at sunset.  This is also one of the best places in the country to glimpse a Golden Eagle, from the observatory near Glen Meavaig.

The south-west of the island is fringed by strips of fine white sand, while the east coast appears lunar-like, with a single track road winding its way through rocky outcrops.  From the hill at Seilebost you can see across to Luskentyre and the snow-topped Harris hills in the background, a myriad mosaic of pure white sand, azure seas and black, brooding mountains.

This is the beach named one of the best in Britain by Conde Naste Traveller.  The Guardian describes it as a “sweep of Maldives-style white sand”, and many have classed it as competition for the Caribbean.  It’s easily one of the most beautiful sights I’ve ever seen; one that plays a starring role in photographer Ian Lawson’s much anticipated book, Harris Tweed: From the Land Comes the Cloth.

Carry on down the coast and you’ll pass more pristine stretches of sand: Horgabost, Tràigh Iar, Scarista.  Stop to experience them all – it will be almost impossible not to.  If golf is your game, tee off at the Isle of Harris Golf Course, which boasts spectacular views onto the sands of Scarista and the open ocean.

Time your trip right, and you’ll end up at Leverburgh restaurant The Anchorage in time to see the sunset over the shimmering Sound of Harris.  Sit back with some seafood and champagne, and bask in the beauty of Harris – the very heart of the Hebrides. 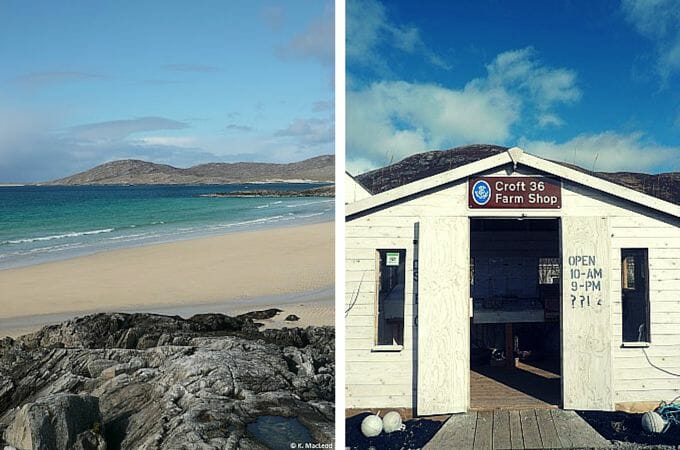 Visit: St Clement’s Church in Rodel.  Built in the 16th century for the chiefs of the Clan MacLeod and dedicated to Pope Clement I, today it is often used as a location for local and destination weddings.  Luskentyre Harris Tweed is also worth a look in.  Run by Donald John Mackay and his wife Maureen, the business gained global recognition when Nike used one of Mackay’s designs in a limited edition run of trainers.

Eat: The Anchorage.  Perched mere metres from the Leverburgh pier, the restaurant features local delights ranging from brie-stuffed beef burgers to fish (think salmon, lobster and langoustines) straight from the sea outside its doors.  Nestled in the tiny village of Northton is the area’s other culinary secret: Croft No. 36.  This wooden farm shop by the roadside looks unassuming, but inside you’ll find dressed crab, pies, quiches and home-baked bread.  The best part? It’s all self-service, and in a tight-knit community, you leave the money for your meal in an honesty box.

Stay: Award-winning Blue Reef Cottages in Scarista.  These turf-roofed, luxury self-catering cottages make for a fabulous Hebridean holiday, complete with heated stone flooring, a fuel-burning stove, ocean views, and a jacuzzi to wind down in as the day draws to a close.

« Street Style and Shopping in Tokyo
A New Side to New York City? »