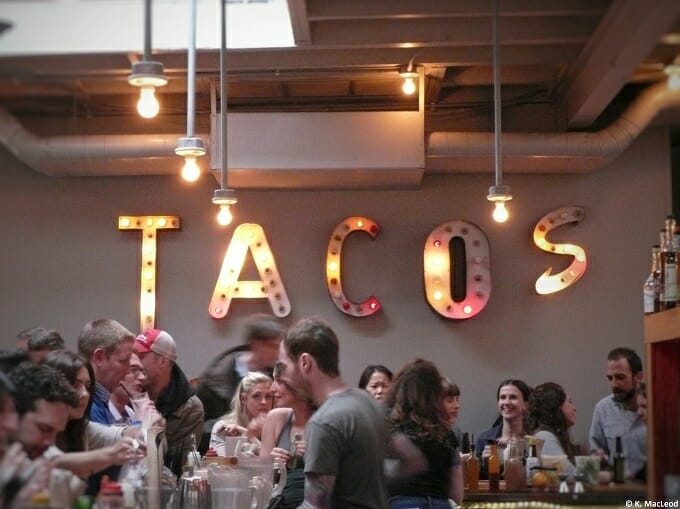 Hip, cool and unpretentious: it’s a hard balance to strike, but Chicago neighbourhoods Bucktown and Wicker Park hit it perfectly.

A mere twenty minute ride on the ‘L’ from downtown Chicago (part of which is known as ‘The Loop’), this area is just the right amount of eccentric.  As Time Out Chicago describes it, “Milwaukee Avenue, Division Street, Damen Avenue and North Avenue are lined with some of the most cutting-edge shops, restaurants, galleries and spas in the city.”

I loved the atmosphere here, the artsy edge to the area that in spite of being named the fourth most hipster neighbourhood in America, comes across as creative rather than copy-cat.  More than once I wondered if tattoos and/or beards were a prerequisite for being part of this community;  Wicker Park is great for people-watching, and the food is equally as interesting as the inhabitants.

First up in the food stakes was Big Star, whose ‘big’ reputation lives up to its name (and the long lines outside the doors).  Located just past the bustling intersection that serves as the beating heart of the neighbourhood, the mechanics garage turned honky-tonk run by James Beard Award-winning chef Paul Kahan serves tacos, beer, and tequila (not to mention those $3 whiskey shots).

There was a two hour wait at the bar, made more than bearable by chips, guacamole, and good company.  Once seated, we ordered a large selection of the tiny tacos, filled with everything from potatoes and tilapia to roasted cactus.  The tilapia was tasty, but my favourite was the Taco Al Pastor: marinated, spit-roasted pork shoulder paired with some sweet, juicy pineapple. 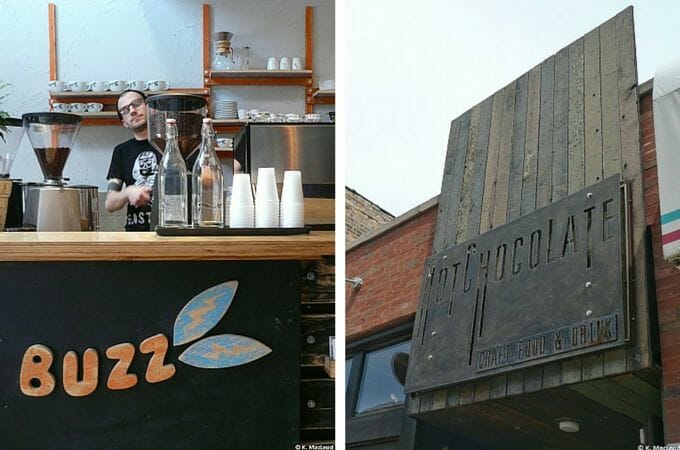 We dined for dessert further along Damen Avenue, at Mindy’s Hot Chocolate.  Here another James Beard bearing chef, Mindy Segal, serves up hot chocolate, milkshakes and ice cream as well as a selection of special sweets.  I opted for the chocolate souffléd tart, paired with pretzel sticks and salted caramel ice cream.  It was heavenly; Segal definitely deserves her dessert accolades.

Buzz: Killer Espresso provided the next day’s pick-me-up.  Advertised as “life support for coffee geeks”, the Wicker Park coffee shop is straight to the point: no fancy frapps, just great coffee. Fuelled by some killer iced coffee, Saturday was spent strolling through the streets, popping in and out of classy boutiques, interesting antique stores and quirky vintage treasure troves.

Our evening entertainment was located in a nearby neighbourhood, at Revolution Brewing in Logan Square.  This craft brewery opened in 2010 and has been bustling (not to mention brewing) ever since.  There was another two hour wait for a table, but it left time to sample the in-house brews before breaking into the appetizers.  The main dishes were a bit of a disappointment after the selection of starters; the bar had been set high by the addictive bacon fat popcorn.

Our last morning in Chicago was drawn out with a lazy al fresco brunch on the back terrace of North Avenue favourite, Birchwood Kitchen.  With a focus on fresh food from local producers, this easy-going eatery was the perfect place to spend a sunny Sunday morning.

When travelling, moving outside the mainstream tourist spots usually serves up interesting experiences.  In terms of Chicago eats with an atmosphere, the menus of Wicker Park and Bucktown are hard to beat.

For more on eating in Chicago, check out my story on experiencing the city with a local chef.