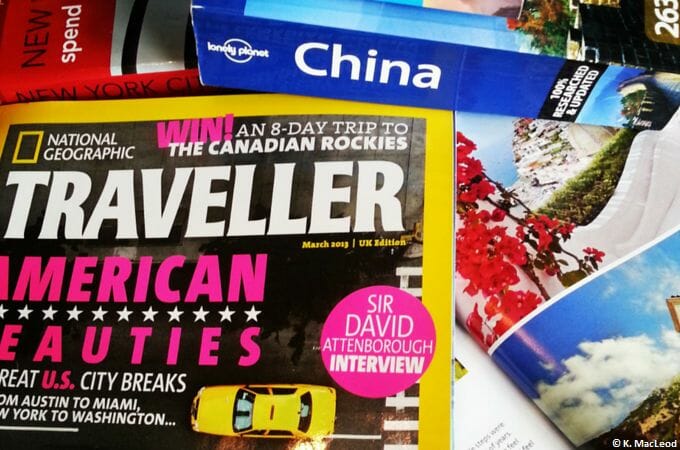 A brightly coloured, geometric patterned Egyptian rug covered the floor of my childhood bedroom.  Foreign treasures from Morocco and Tunisia stood on shelves in the kitchen.  Slightly out-of-focus shots of Greek islands stirred my early imaginings of international travel.

Wanderlust waded into my life long before I ever left the country.  It wasn’t just the physical reminders of my parents’ twenty-something travels that left an imprint, but the interest they instilled in my brother and I of the outside world, of learning, and of curiosity.

The night light by my bed was a globe. For ‘personal projects’ in primary school – those early attempts at research – others chose animals or famous film stars while I chose the far-flung places I wanted to visit.  France. Australia. Greece.  Travel agent shops seemed like a gateway to adventure, where I leafed longingly through brochures bursting with destinations I was desperate to see (Disney World, Florida, was high up the list in those days.  If I’m honest, it still is!).

On top of these early inspirations, I can clearly remember the first time I felt the thrill of the unknown through travel.  At eight years old I was in London for the first time and loving it: splashing in the fountains of Trafalgar Square, craning my neck to catch a glimpse of the top of the tower that is One Canada Square, buying a Spice Girls postcard on Oxford Street.

I loved how busy it was, how big the buildings were, how much there was to see and do.  Alighting from the train in Inverness, I was deeply (and vocally) disappointed at how small everything seemed in comparison.  Of course, that soon wore off – I settled back into open skies, fresh air, and the freedom to roam the countryside with my friends almost immediately.  But the travel seed had been sown, the bug had bitten, and I would never recover.

Four years later we were flying to Turkey for our first family holiday abroad.  There were sugared cubes of Turkish delight; kebabs bearing no resemblance to their British cousins; a market that sprang up along the roadside after sunset; a day among the ruins of Ephesus.  Turkey was different to anywhere I had ever known – and I adored it.

There have been countless countries and cities since then, and my future wanderlist keeps on growing.  Some people think it might just be possible to get the travel bug out of their system, but in reality, wanderlust is insatiable.  To quote the legendary Michael Palin, “Once the travel bug bites there is no known antidote, and I know that I shall be happily infected until the end of my life.”

When (and where) did you catch the ‘travel bug’? I’d love to hear your stories of discovering travel – let me know in the comments below, or on Facebook, Twitter, or Instagram!

« Art in the Scottish Islands: In Praise of Peat
Gallivanting Around The Grassmarket »