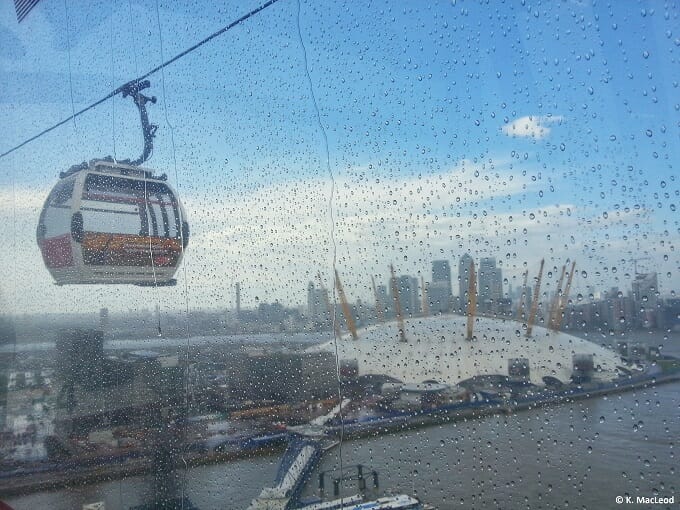 Swinging precariously in the wind and rain at nearly 300 ft above the River Thames, I had to admit to feeling the slightest bit nervous.

But any nerves were soon blown away by the incredible view below.  Sitting in a cabin on the Emirates Air Line – London’s only cable car, and the UK’s only urban cable car ride – I had a 360 degree view of London’s East End, from an angle you simply can’t find at the top of skyscraper.

There was the O2 (formerly the Millennium Dome), sprawled at the tip of Greenwich Peninsula.  Behind it, as the rain clouds cleared, rose the financial towers of Canary Wharf.  To the left was the Thames Barrier, instrumental in keeping the country’s capital city above water during storms.

I could see the runway at City Airport, the flight path directed right above my head; Container City II, home to creative studios on the banks of the Thames; and the cars and boats that seemed like children’s toys puttering along on the ground.

On a sunny day, I’m sure the views are even more far-reaching and spectacular, yet the clouds added a little something extra to the experience. 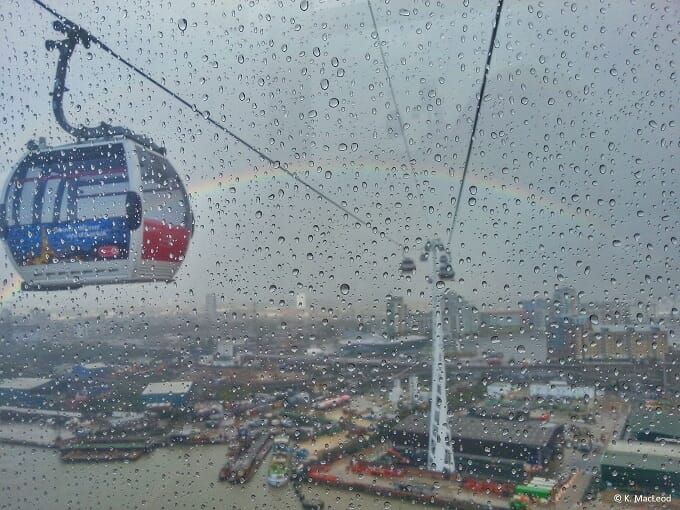 As the cable car began to descend to the south side of the river, a full rainbow broke through the darkness to the north – a truly beautiful sight.  There is an on-board audio tour too, but I was so taken with the city below that I only heard snatches of the commentary.

Run by Transport for London and sponsored by Emirates, the cable car service opened in the summer of 2012 and operates 34 cabins at a time.  They arrive so frequently (every 30 seconds) that the Emirates Air Line is used by commuters to cross the Thames to work each day.  The ten-minute journey is a mere £3.50 swipe of an Oyster Card, and if you start from the Royal Docks side of the river, like I did, it takes you to the tip of North Greenwich, within walking distance of tube and bus connections at the O2.

From here you have the whole of Greenwich at your feet: the Royal Observatory; the Cutty Sark; the National Maritime Museum; and Greenwich Market.  The market provided excellent cover from the pouring rain, not to mention interesting browsing in the form of antiques.  Although the weather conspired against me this time, Greenwich is definitely an area of London I want to see more of.

The Emirates Air Line felt a bit like a fair ground ride: exhilarating and a little nerve-wracking, but when it’s over, you want to experience it all over again.

For an alternative view of London – come rain or shine – you can’t beat ‘flying’ over the Thames. 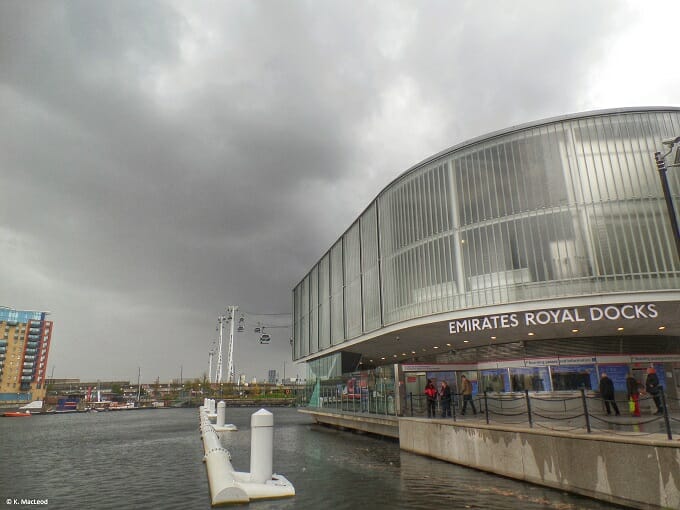 How much does it cost?  A one-way journey on the cable car costs £3.50 using an Oyster card, or £4.50 when purchasing a “Boarding Pass” at the station.

Have you ever ridden the Emirates Air Line cable car, or would you like to?