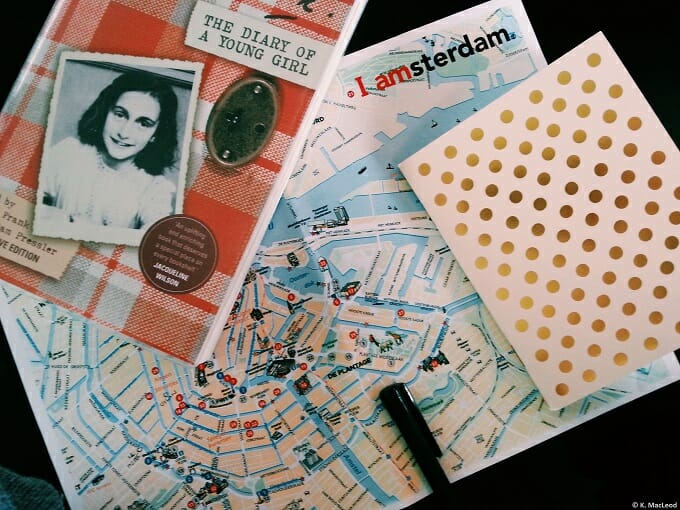 It was on the flight from Inverness to Amsterdam that I turned the final, abrupt page of Anne Frank’s diary.

Standing in the Anne Frank House on the Prinsengracht, little more than 90 minutes later, with her words fresh in my mind, felt incredibly surreal.

There can be few people out there who haven’t heard of Anne Frank and her famous diary, written mostly while she and her family were in hiding from the Nazis during World War II.  The diary has been translated into 70 languages, sold more than 30 million copies, made into films, been the subject of countless documentaries, and even been added to the World Documentary Heritage List by UNESCO.

Re-reading The Diary of A Young Girl more than 15 years after I first encountered the story meant I was old enough to truly appreciate both Anne’s writing, and the events she was writing about.  It also meant I was able to look at the Secret Annex and the exhibitions at the Anne Frank House in a different light.

I was barely off the plane when I was hurrying alongside the Prinsengracht canal, passing the Westerkerk church, and presenting my pre-paid ticket at the entrance to the Anne Frank House.

One of Amsterdam’s most-visited museums, it was officially opened in 1960 with the hopes of preserving the house that witnessed so much, and spreading the message of Anne’s life and ideals.

A small group of us were given a pre-tour talk about Anne, her diary, and the experience of Jews in The Netherlands during Wold War II.  We wouldn’t see furniture in the floors above, we were told, because after Jewish families were evicted from the country, their furniture was sent to Germany and sold cheaply to the poor – an act that helped Hitler remain popular.

The self-guided tour starts at the bottom of the building, and works its way through the offices to the infamous moveable bookcase, and on to the Secret Annex.  Even from the ground floor you can hear the footsteps of visitors upstairs, and it makes you realise just how silent those in hiding had to be to minimise the risk of discovery.

You stand in front of the bookcase, and start to realise the enormity of living a life behind it.

You see the small, blackened stove that meals (and arguments) took place next to, and think of their life of confinement.   You walk past postcards of film stars on what was Anne’s bedroom wall, and remember she was an ordinary teenager with hopes, dreams, and hobbies.  You see the blackout covers over the windows, and experience a small measure of the sense of enclosure that they must have felt. 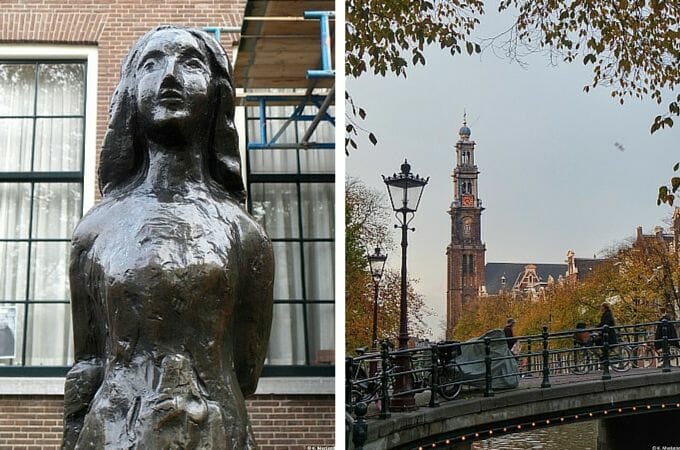 Throughout, the story is told using quotes from Anne’s diary, photographs, and short films.

After the Annex, you come to an exhibition which details what happened to those in hiding – the Franks, the Van Pels, and Fritz Pfeiffer – after they were discovered.  I found it difficult to read their names on cards from the concentration camps, and had to look away from a video filmed at Belsen Bergen, where Anne died just months before liberation.

Further along, where the recorded voice of Anne’s friend Hanneli fills your ears, a heavy tome sits in a glass case.  Open to the page where the Frank family are listed, it holds the names of every single Jew deported from The Netherlands by the Nazis: it’s staggering.

Feeling sightly dazed, I made my way down some more steep stairs to find The Diary Room, opened in 2010 by Queen Beatrix of The Netherlands. The world famous red-and-green checked diary is here, as are numerous other notebooks that served as diaries, short story collections, and a book of inspiring quotes.

While on one hand, a visit here can make you despair of the awful things humans are capable of, it also shows what people are willing to do to stand by each other, whether that’s Anne’s resilient spirit, or the actions of those who made life in hiding for the Franks a possibility.

A temporary  exhibition currently on show is dedicated to the helpers of the Secret Annex, the four office workers who helped the family go into hiding, and who were the Franks only contact with the outside world for two years.  They did what was right, despite huge personal risk.

By the time I reached the final exhibit, a film showing actors, writers, museum visitors, and personal friends talking about Anne and her diary, I was fighting back the tears.  Visiting the Anne Frank House is a sobering, moving experience; uplifting and upsetting all at once.

A visit here should be on the agenda for anyone travelling to Amsterdam.

Not only does the museum bring to life Anne’s own personal story, but it reminds us all of the dangers of discrimination and the importance of freedom.  It goes without saying that the experience of Anne, and millions like her, should not be forgotten.

How much does a visit to the Anne Frank House cost?  I visited the Anne Frank House with a pre-paid online ticket, which meant I could arrive at a specific time and avoid queuing outside. Tickets cost €9.50, and attending the 30 minute in-depth introductory talk costs an additional €14.30.