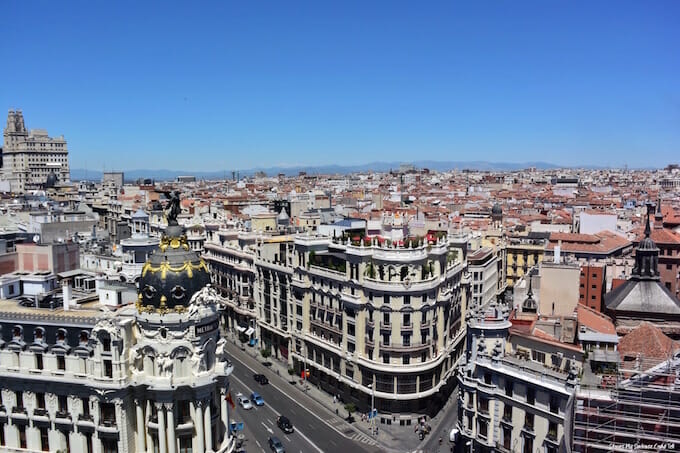 Sometimes, it’s okay not to see all of a city’s major sights.

In our three days in Madrid this summer – one of which was spent mostly in nearby Segovia – my family and I didn’t visit the Prado, or the Reina Sofia. We didn’t really follow the guidebook. What we did instead was stroll around the plazas and the markets, stopping for churros and tapas and sangria when the feeling took us.

Madrid was the perfect city for that type of wandering. 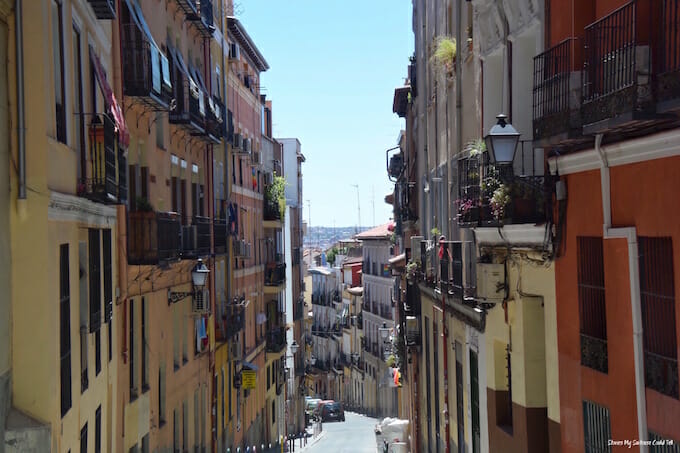 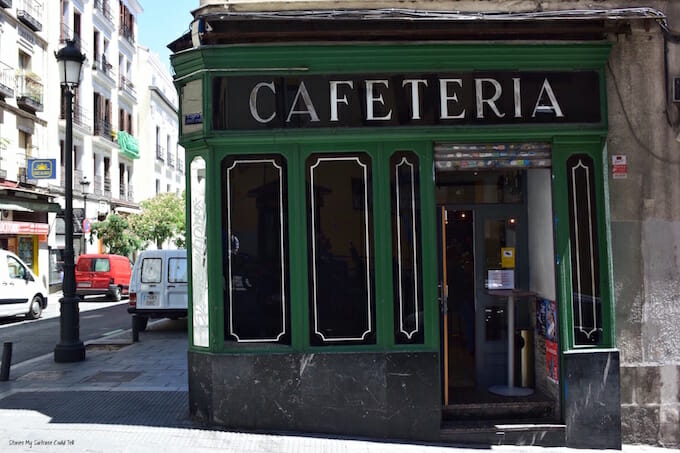 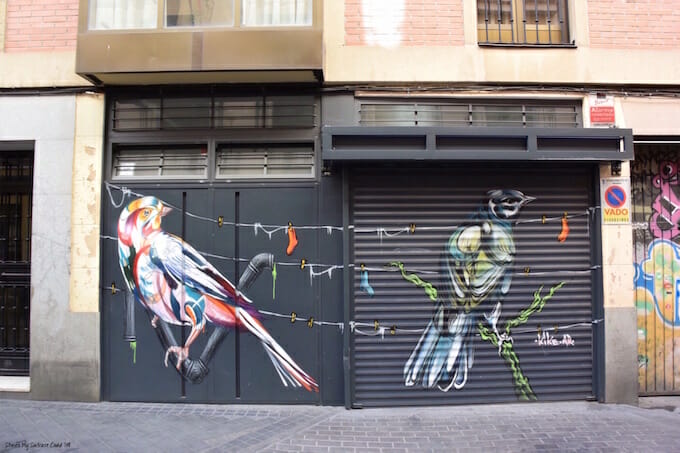 We saw a lot of these closed shutters. It was my first visit to Spain, my first time witnessing the siesta culture first-hand, where people eat a long, large, lunch and retreat indoors in the heat of the afternoon, before emerging again the cool glow of the evening to eat, drink, and socialise.

Regardless of the time of day, the entire city felt laid back.

In our neighbourhood, La Latina, there was an unhurried atmosphere in the streets, whether morning, noon, or night. Medieval streets wind around the squares and plazas. Small boutiques, cafes, and restaurants were quiet during the day, and buzzing as darkness fell. In the early morning, the Mercado de la Cebada housed locals shopping for food; by night, teenagers crowded in the empty lot outside, playing basketball, skateboarding, simply hanging out. 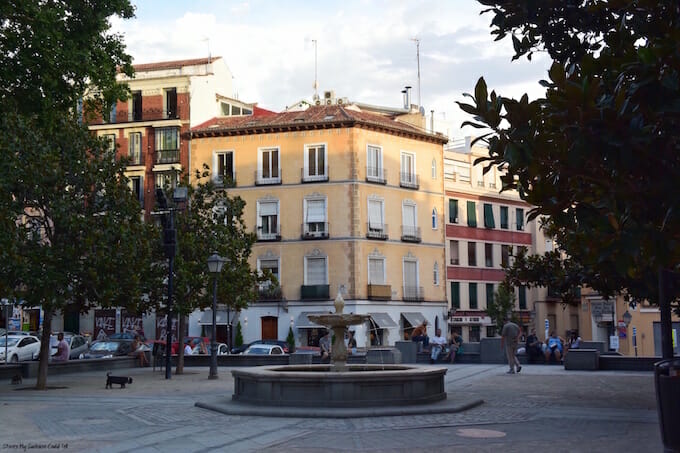 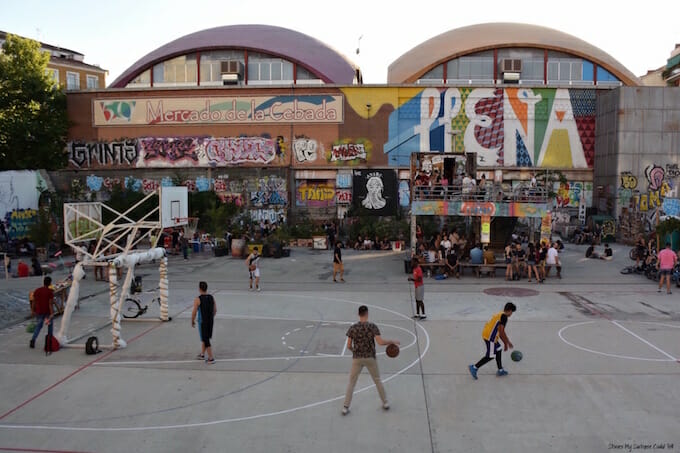 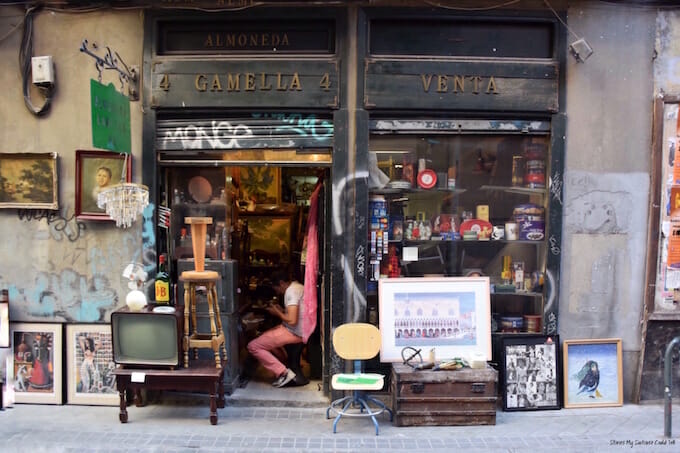 From La Latina, it was a short walk to Plaza Mayor, the 17th century square that acts as an orientation point for anyone visiting the city. Over the centuries it’s seen bull fights, condemnations of heretics, and a full-scale fire. When we wandered through on our way towards the Palacio Real, the home of Spain’s royal family, that turbulent history felt distant, as the sun beat down on tour groups stepping out of the shade.

We wound our way to the Gran Via, the city’s main shopping street, in search of the rooftop I’d read offered the best views over Madrid.

When we found the lofty spot – at the Circulo de Bellas Artes – the heat was fierce, but the panoramic views were lovely, even under the midday glare. Past the terracotta-tinged rooftops, out on the plains, we could just make out the hilltop town of Toledo through the haze. 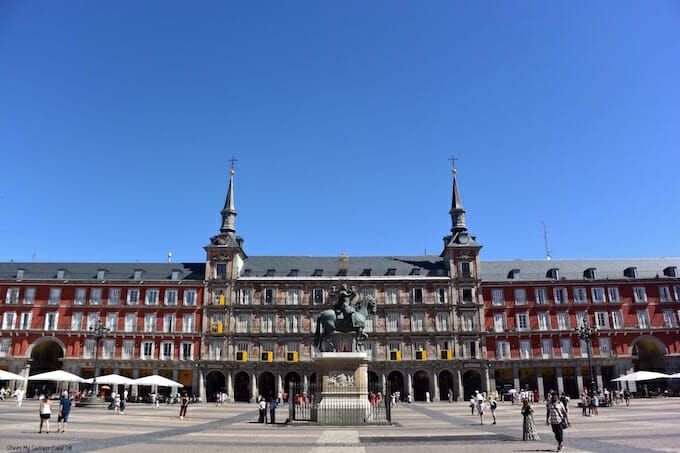 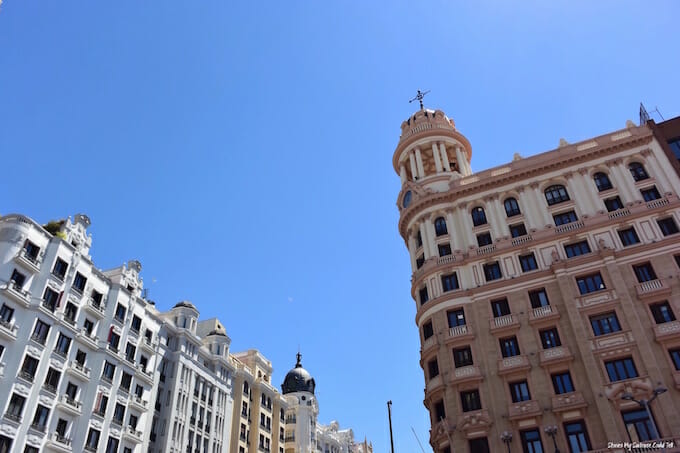 Back in La Latina, on our last morning of wandering in Madrid, we found shelter from the rain in the Basilica de San Francisco El Grande. I’d spied its domes and yellow walls from near Plaza de Puerto de la Puerta de Moros, a square in the shadow of another church, and we decided to pay it a visit, our first panacea to the guidebook.

The Basilica dates from the 18th century, although rumour has it that St Francis of Assisi built a chapel here in 1217. Stepping under the frescoed dome was perhaps my favourite – and most surprising – moment of our three days in Madrid: it was beautiful. And not only was the basilica beautiful, but we had the space all to ourselves.

The tour guide, who spoke little English, motioned for us to view the frescos on the walls in each of the Basilica’s chapels (one features an early Goya), before showing us through the maze of corridors behind the high alter, each of them decorated with 18th and 19th century works of art.

That morning after the basilica, we found shelter a second time, this time in a café serving churros and chocolate.

For me, our meals over those three days were almost more of a marker of our time in Madrid than any famous sights. I ordered huevos estrellados – eggs, crisps, and ham – more than once, and discovered a newfound love of mini bocadillos, small baguette-like rolls stuffed with ham, or jamon. 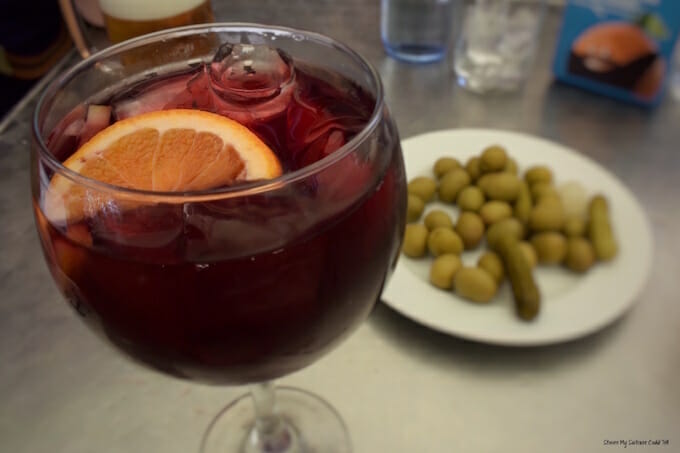 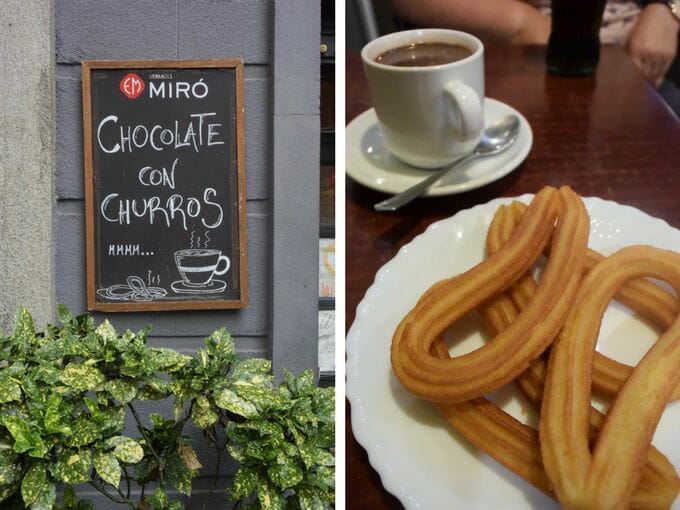 La Latina is known for its tapas bars, and I adored the tradition of nibbling on small snacks and sipping a glass of wine as the sun dipped behind the rooftops, ordering another selection of tapas, and then another (and another). Whether outside a small bar on Constanilla de San Pedro, or inside, crowded around an overflowing table at Almedro 13, the food was delightful – and I couldn’t get enough of it.

All too soon, though, our city break in Madrid was over.

One last meal of tapas, one last snack of churros con chocolate, and then we were in the skies heading north. It had been a short and sweet introduction to Spain for me, but just long enough to whet my appetite (literally – I still haven’t forgot that tapas!) for a longer encounter. 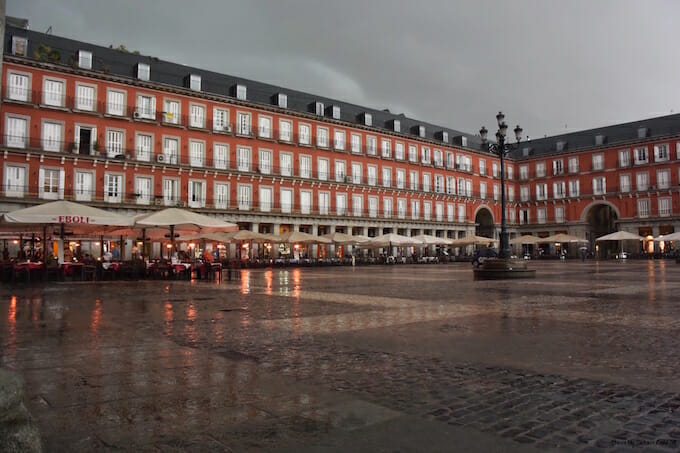 Where should I stay?  There are lots of options (and neighbourhoods) to choose from for a city break in Madrid, but we opted for a self-catering holiday apartment in the up-and-coming La Latina area, which was a quick walk from the central plaza.

Where should I eat?  Well, that’s completely up to you! I found some great tips over at Devour Madrid, and some fun spots we visited were Almedro 13 in La Latina; the bars around Plaza San Andres; Mas Corazon near the Anton Martin subway stop; and the bustling Mercado de San Miguel near the Plaza Mayor.

How can I get around? We took the subway in to the centre from the airport (at the time of writing, the ticket costs 5 euros), but other than that, we walked everywhere – Madrid is a wonderful city to leisurely walk through!

Have you ever been to Madrid, or visited a city and not seen the major sights? Let me know in the comments below – I’d love to hear from you!

« 10 Top Experiences for a Girls’ Getaway in the Finger Lakes
Stories My Suitcase Could Tell Turns Six! »