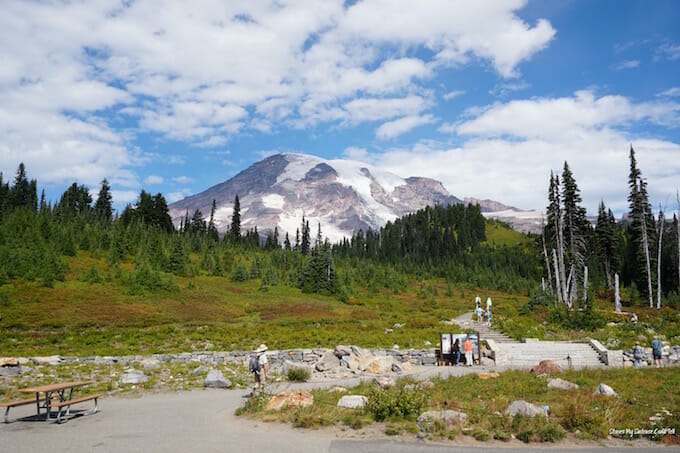 The view in front of us reminded me of a scene from a children’s storybook, like Heidi, or Hansel and Gretel.

Colourful wildflowers swaying in the slightest chill of a breeze. Straight-backed pine trees pointing at a cornflower blue sky. And at the centre of it all, the peak of Mount Rainier: sharp, imposing, and beautiful.

On my first visit to Seattle, in the winter of 2017, Mount Rainier had eluded me. The Olympic Mountains would appear occasionally, stark against the skyline to the west, but Rainier always stayed hidden. On this visit, my second to Seattle, I was determined to see the mountain, the one on every Washington state licence plate and gracing every other postcard. Surely, in the sunny days of September, Mount Rainier would make itself known?

Alas, no matter my vantage point, Rainier stayed away. Whether I sought it out from the hilltop of Kerry Park, or the fringes of the city, distant clouds obscured the peak every time. Enough was enough: if the mountain wouldn’t come to me, I would go to the mountain.

Which is how my husband and I found ourselves admiring wildflowers and pine trees at Paradise, home to one of the main visitor centres in Mount Rainier National Park. 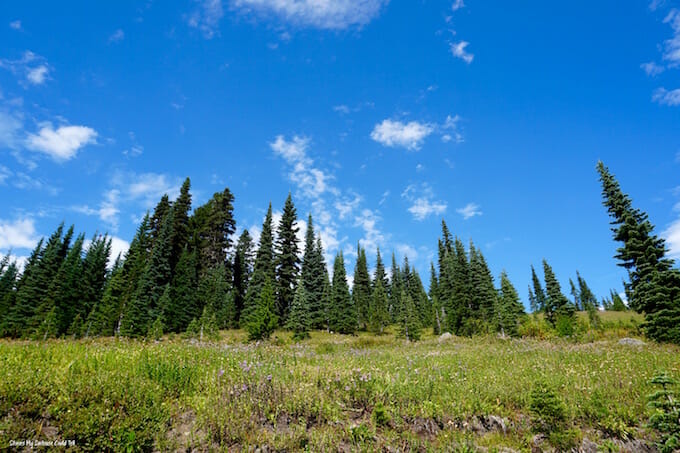 We had arrived at just the right time to see the famous wildflower meadows I was so taken with. Any later and we might have missed them, as the area, at 5400 feet, is only snow-free for about two months in the summer.

John Muir – the Scottish-born American naturalist who influenced the formation of the early national parks – described these meadows as “the most luxuriant and the most extravagantly beautiful of all the alpine gardens I ever beheld in all my mountain-top wanderings.” His words are now engraved into the stone steps that lead to the trails at Paradise, visitors posing next to them for photos. Looking at the view in front of me, ready to begin our day of hiking, I knew what he meant. I might not have seen “alpine gardens” before, or gone on any “mountain-top wanderings” myself, but this place looked pretty special to me.

We had set off early that morning, camera equipment, packed lunches, and an extra layer or two in the boot of the car.

It takes about two hours to reach the entrance to the National Park from Seattle, a route where the strip malls and highways fade away to be replaced by smaller roads, tractors in fields, and big red barns. The first glimpse of Rainier in the distance was thrilling, a thrill with a slight edge of discomfort; Mount Rainier is after all an active volcano, albeit one that hasn’t had a major eruption since the 1800s.

Closer to the park, though, the pine trees take over, and obscure any view. The result was we didn’t realize how high we were climbing until we pulled over into one of the park’s first view points, and the mountain top was right there above the treetops. Even then, in early September, ice clung to its edges, the water from the glaciers thundering off into rivers far below us.

I’d never seen a mountain like this before. Yes, Scotland has mountains, but at 4,413 feet, the country’s highest mountain, Ben Nevis, barely makes a dent against the one we were on. Mount Rainier, located in the Cascade Ridge just south of Seattle, reaches an impressive 14,410 feet, and is the fifth highest peak in the contiguous United States. It’s located in one of the USA’s first national parks, founded in 1899, and two million visitors a year come to see the mountain in all its glory. 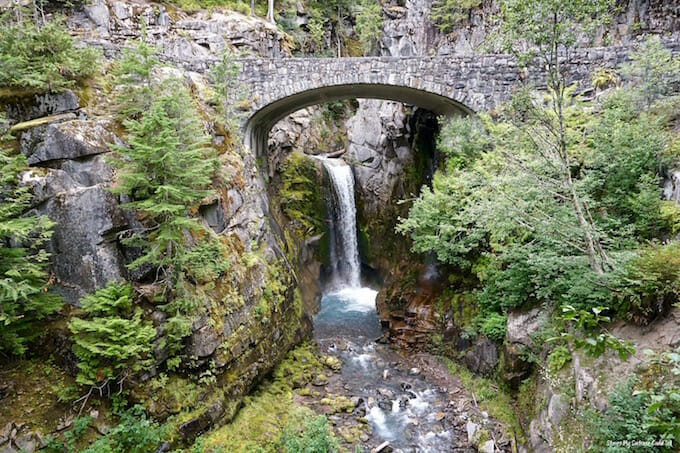 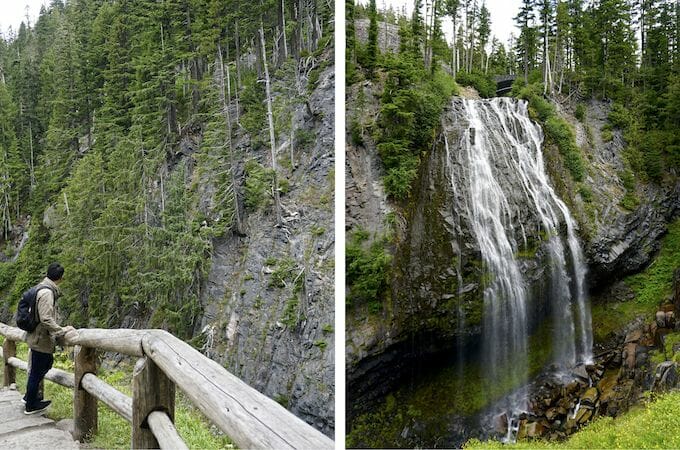 Paradise, from where we began our walk through the meadows of wild flowers, is one of the most popular parts of the park.

Even on a weekday morning, the trails were busy with visitors of all ages and abilities: there were the athletic groups decked out in hiking boots and carrying walking poles; elderly couples and families with children taking the paved path slowly, enjoying the scenery at Myrtle Falls; and the casual hikers like us, with backpacks and trainers, but no OS maps or hiking equipment to suggest they were going to the top. (We most certainly weren’t!)

Our gentle hike took us past Myrtle Falls, a waterfall that did nothing to dispel my fairy-tale impression of the place, and onto the Skyline Trail, a 5.5 mile loop with an elevation gain of 1700 feet. While we didn’t venture into overly adventurous territory, we walked far enough to escape the crowds and quietly admire the view of the Cascade mountains around us.  We also ran into some Park Rangers who were incredibly helpful, and who enthusiastically pointed out the names of the more unusual varieties of wildflowers when I crouched down to get a closer look. 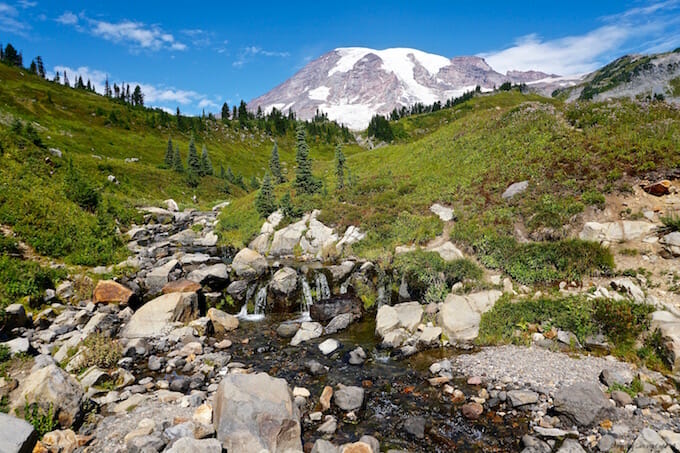 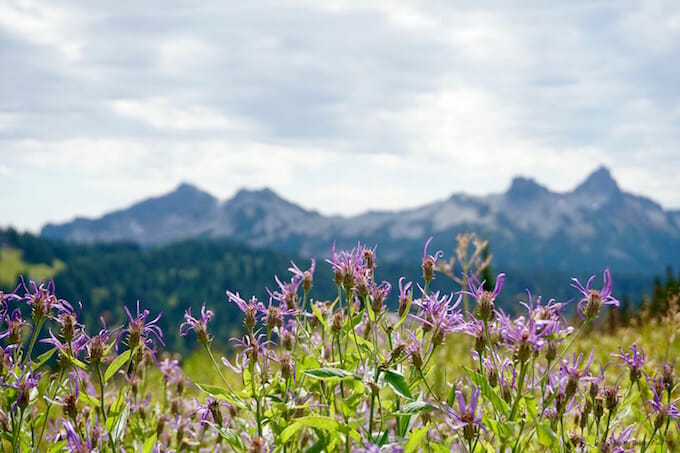 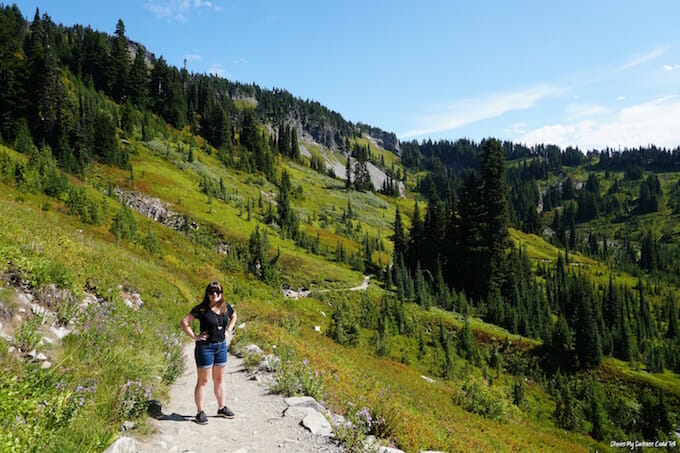 And it wasn’t just wildflowers and pine trees we saw, either. On the Nisqually Vista Trail, which offers an unobstructed view of the Nisqually Glacier (just one of 25 named glaciers on the mountain) we encountered chipmunks, tadpoles, and even a young deer, watching us warily from in between the pines.

After our morning of hiking, we returned to the car and made our way to Reflection Lakes. Here, the only thing disrupting the mirror-view of the mountain were the ducks lazily gliding their way across the surface of the water. From there, it was a slightly hair-raising car journey along cliff-edge roads to the north-west of the park, where we stopped at the smaller Tipsoo Lake, before taking the road out of the park and back to reality. 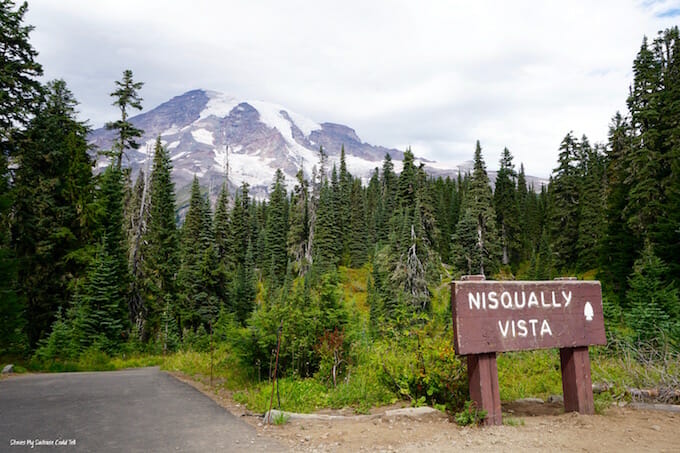 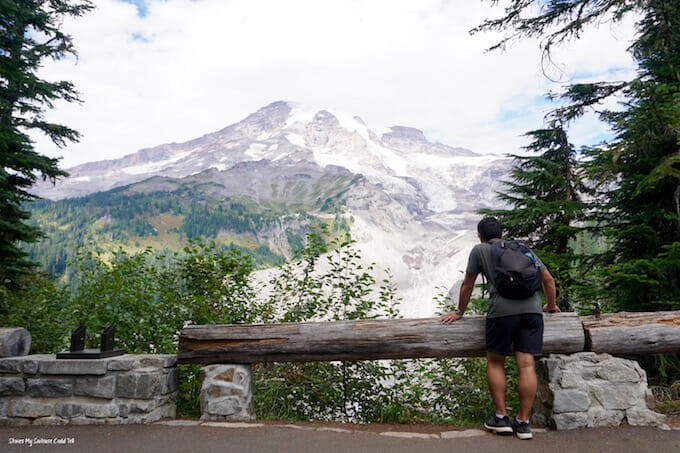 On our return drive to Seattle, I kept glancing backwards out of the window, trying to get one more glimpse of the mountain.

Whether it was the beauty of the Cascade Range, the endorphins from a day of hiking, the benefits of being out in nature and fresh air, or some combination of all three, I was high on excitement. Maybe, as John Muir wrote in his journals, it was because “our bodies were made to thrive only in pure air, and the scenes in which pure air is found.” After our day trip to Mount Rainier, I could well believe it, and I wanted one last look before the mountain disappeared behind the clouds again, as I knew it would.

Less than 24 hours later, we found ourselves high above sea level again, this time on the glass-walled observation deck of the Space Needle, another iconic landmark of the Pacific Northwest. I looked south beyond the Seattle skyline, straining my eyes to see into the distance, but it was no use. The elusive peak was playing hide-and-seek again, but I didn’t mind as much this time. After two years of trying, I’d finally met Mount Rainier. 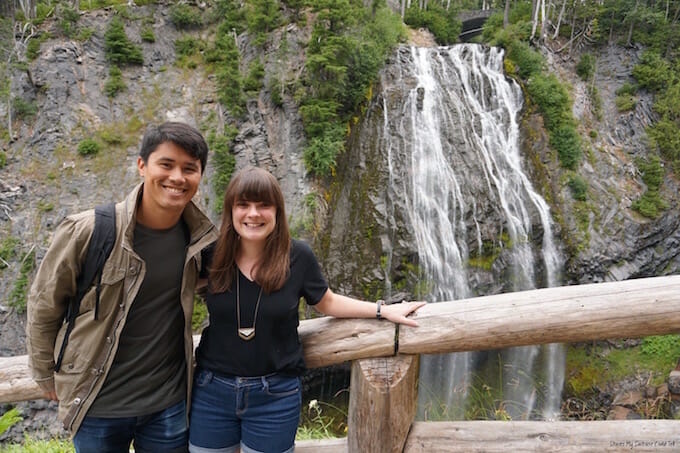 How do I get to Mount Rainier National Park?  The park has five entrances to choose from, and your choice will depend on your location, what you want to see when you visit, and how long you want to spend driving. We chose to drive south from Seattle, and arrived at the southwest Nisqually entrance, spending most of our day at Paradise, then driving northeast towards Sunrise to exit the park. (Remember to put enough petrol in the car before you reach the park to last you the whole journey!)

How much does it cost?  Visiting the park costs $30 for a car pass, valid for seven days, with other options available for camping, cycling, and motor biking.

When should I visit?  Mount Rainier is popular to visit in winter for snow-related activities, but I can personally recommend the beautiful wildflower season of late summer in the “alpine gardens” John Muir wrote of.

Where can I find more information?  The National Park Service website has all the information you could need about a day trip to Mount Rainier – and much more besides!

Would you like to go on a day trip to Mount Rainier National Park? Have you ever visited it, or any of the other USA National Parks?