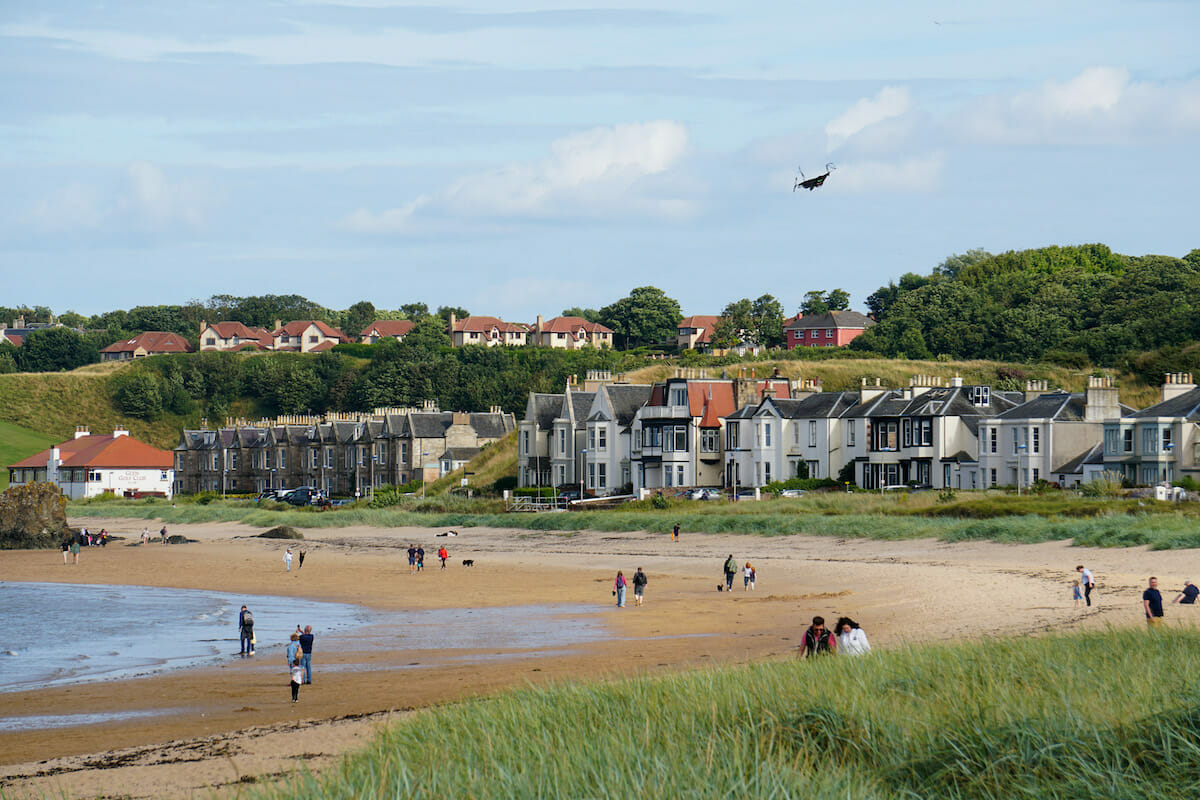 It would be impossible to miss North Berwick Law, a dome of volcanic rock that looks oddly out of place among the neat rolling fields and bales of hay that make up this area of East Lothian.

Our drive from Edinburgh to the Scottish seaside town took us off the motorway and onto winding narrow roads lined with low stone walls, guiding us past long driveways leading to stately-looking homes and tractors moving steadily through farmland, their bulk outlined in the late afternoon light.

“Are we nearly there?” I asked my brother, who was handling driving duties, when we’d travelled what seemed at least the amount of time the sat nav had estimated. He nodded his head in the direction of the hill looming ahead of us, and explained the town was at its foot.

It sounds cliched to say it, but I was immediately charmed by North Berwick, by its cobbled streets, pastel-painted cottages, and glorious stretches of beach on either side of the rocky harbour.

The town became a popular holiday destination in the 19th century, thanks to its two sandy bays, and was known as the “Biarritz of the North,” in reference to the French resort where doctors prescribed healing seaside visits. (Even today, a visitor information board on West Bay Beach advises tourists to enjoy those lungfuls of fresh air.) North Berwick is still famous for its beaches – it’s easy to see why – and golf fans make their way here for the two renowned golf courses as well.

We had arrived from Edinburgh at about 5 o’ clock, when there were already queues outside the fish and chip shop for dinner, friends enjoying drinks outside the local pub, and freshly made ice cream cones being churned out from the local gelateria, Alandas.

Proper seaside fish and chips are one of the meals I miss most when I’m away from the U.K., so a fish supper from the North Berwick Fry was definitely in order. With our legs swinging over the Milsey Bay Beach wall, our cartons of fish and chips in our laps, and the view of the beach, Victorian pool, and Bass Rock in the distance, I couldn’t have asked for a better setting for one of my favourite British dinners. 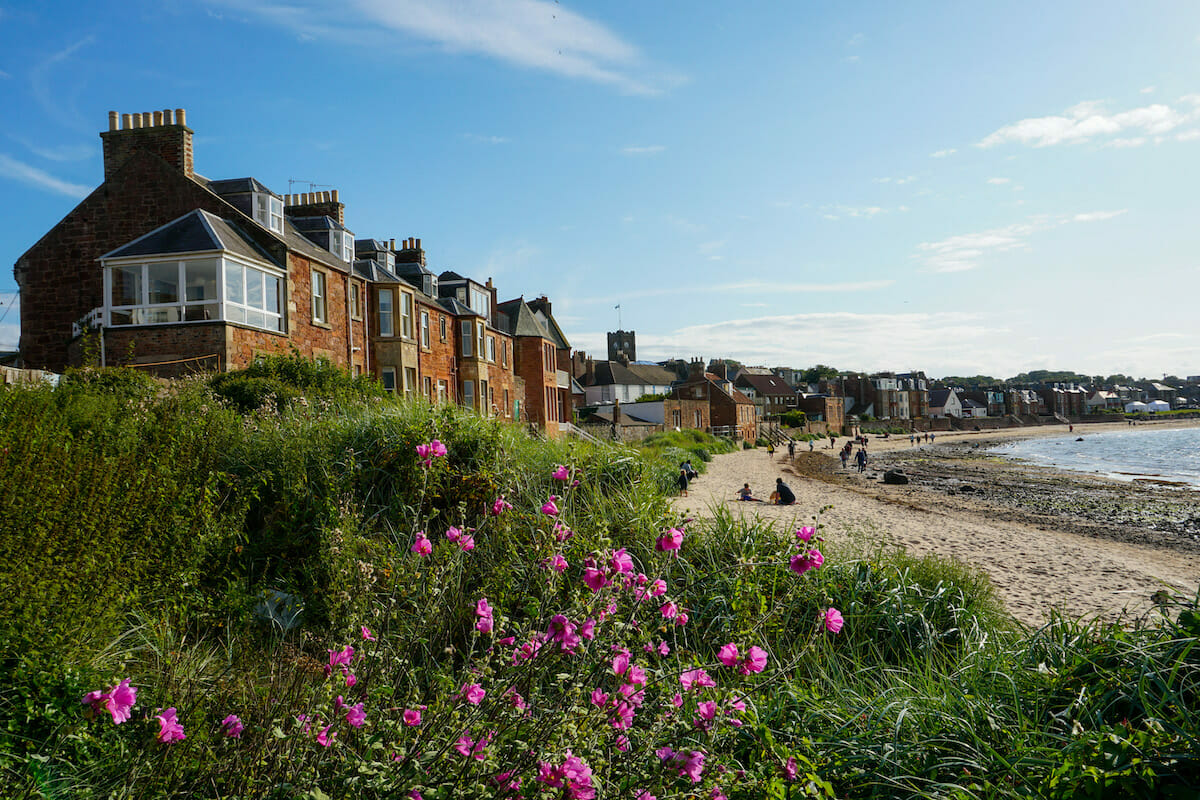 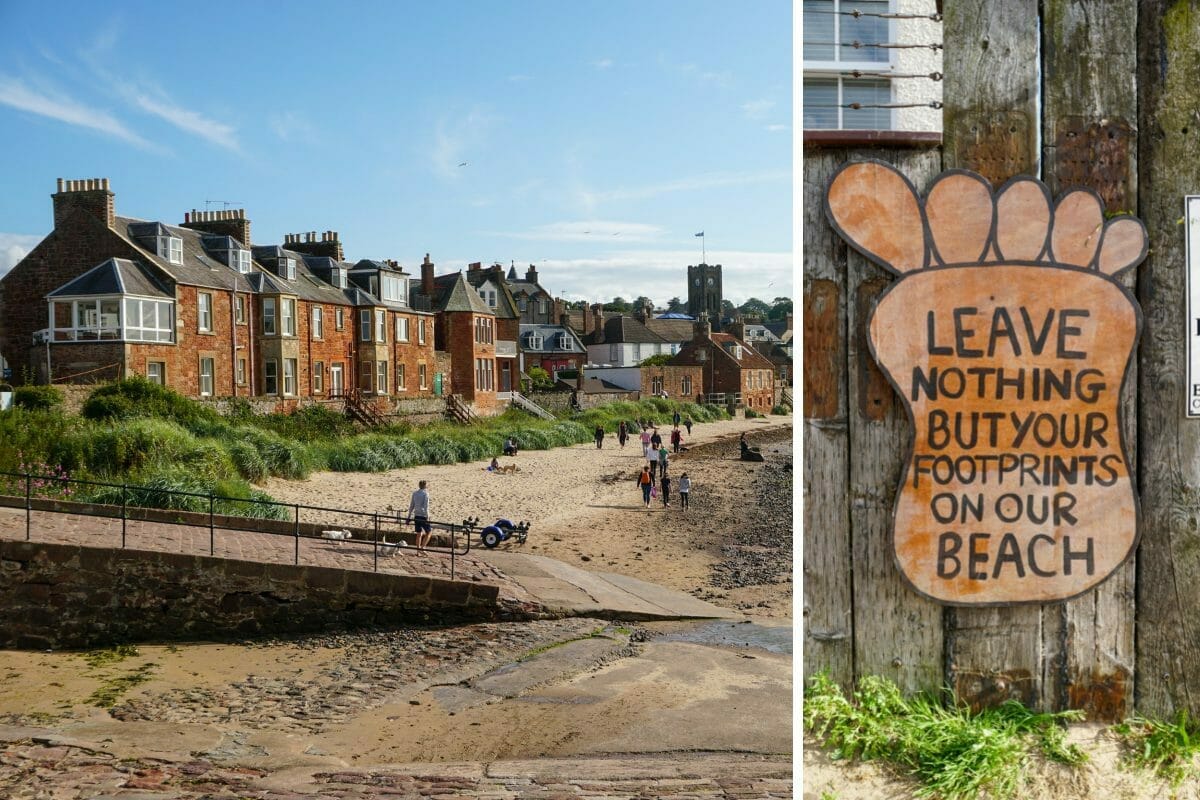 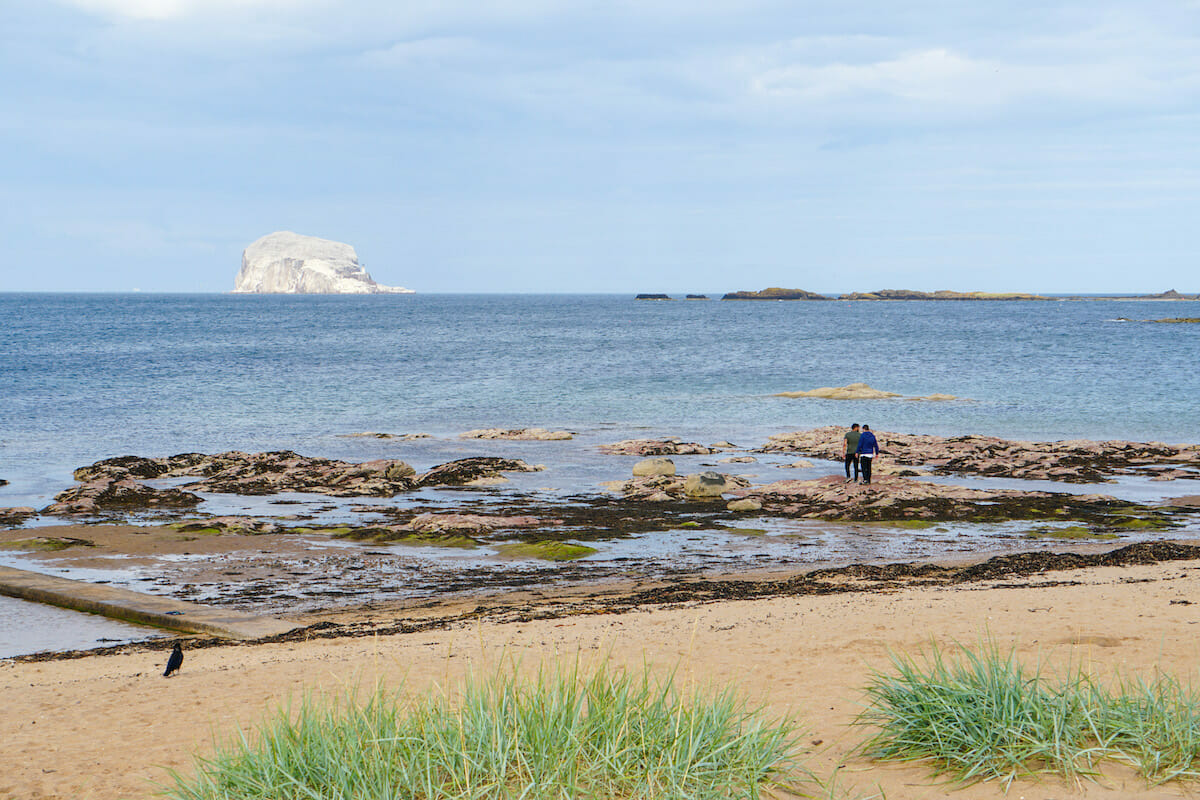 Beyond the swimmers and sandpipers in front of us, my eyes kept swinging out to Bass Rock, as equally out of place in the expanse of the Firth of Forth as the Law seemed on the approach to the town.

At 107 metres, the island’s steep cliffs are home to the largest Northern gannet colony in the world, and its guano-covered rocks look white even from the distance of more than a mile. We were too late in the day to visit the rock viewpoint at Tantallon Castle, a mile or two along the coast, but even from the town the outcrop looked imposing, almost creepy.

Fish and chips eagerly finished, we made our way slowly along the high street, where inviting shop window displays and closed doors made me wish again that we had arrived earlier in the day, and looped back to West Bay Beach. We passed hardy swimmers going for an evening dip, and families playing at the base of the steps that led up to the waterside homes.

At the harbour, the annual Fringe by the Sea Festival was in full swing, with Sixties tunes ringing out above the heads of festival goers eating and drinking next to primary-coloured beach huts. From the walkway cut into the rock, Bass Rock became visible to us again, as did the sightseeing boats returning from the island and the neighbouring Isle of May to the Scottish Seabird Centre, one of the town’s most popular attractions. 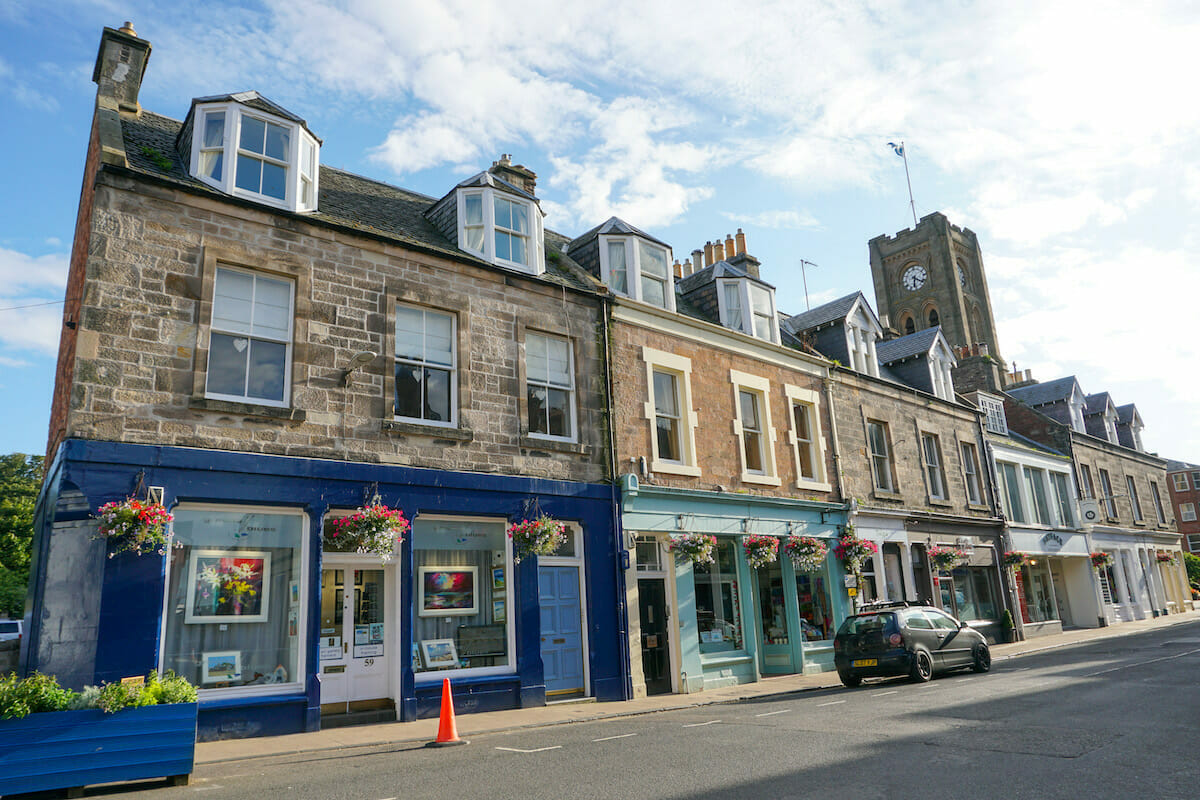 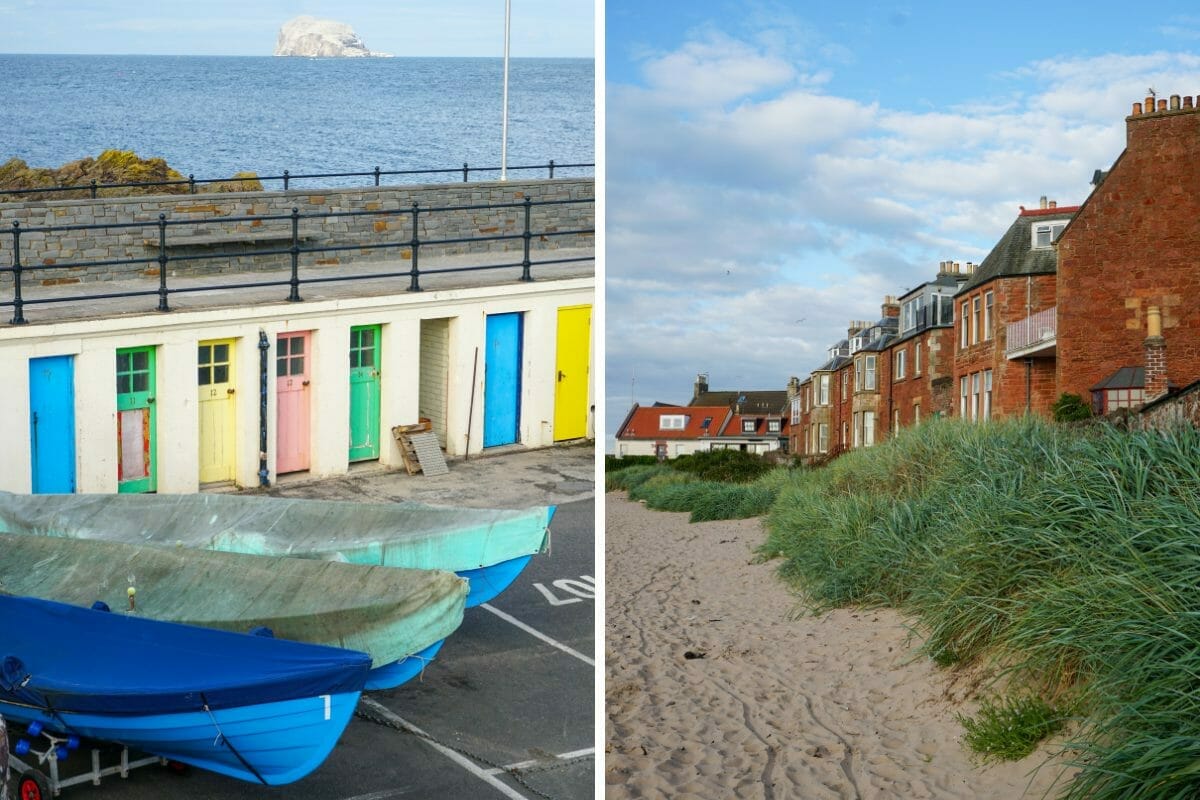 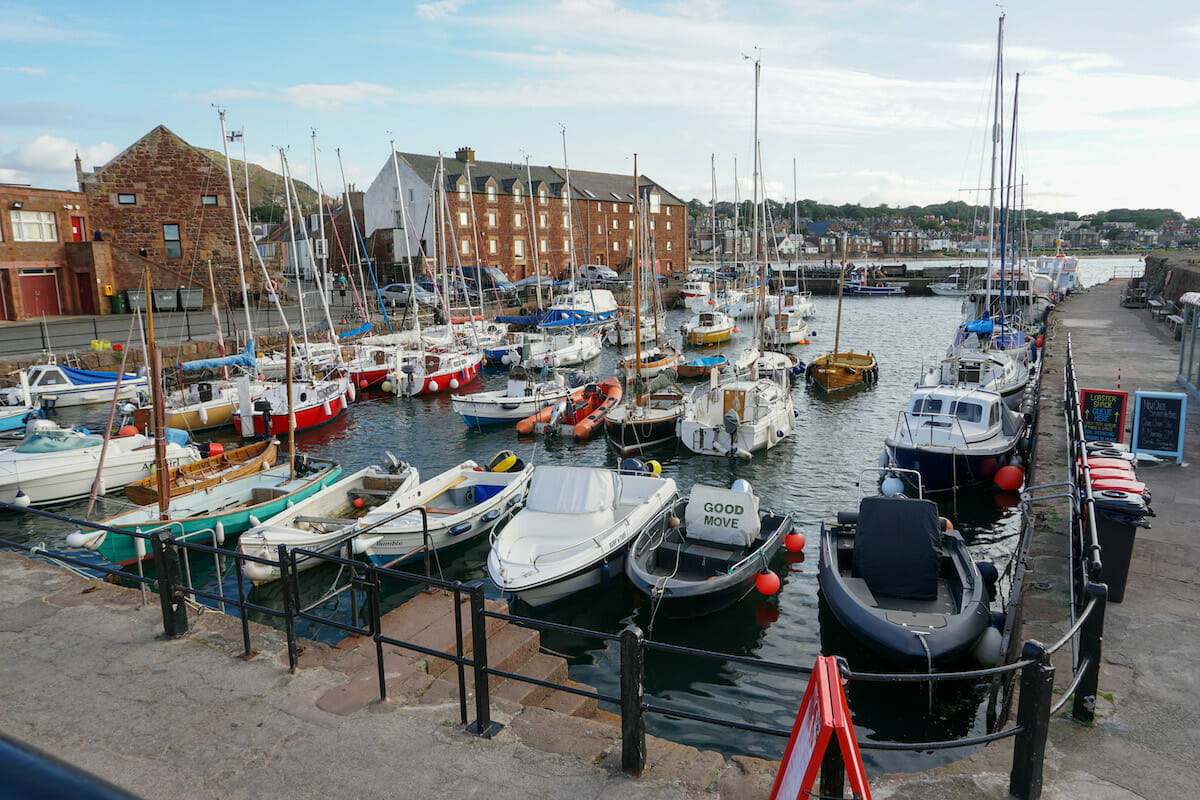 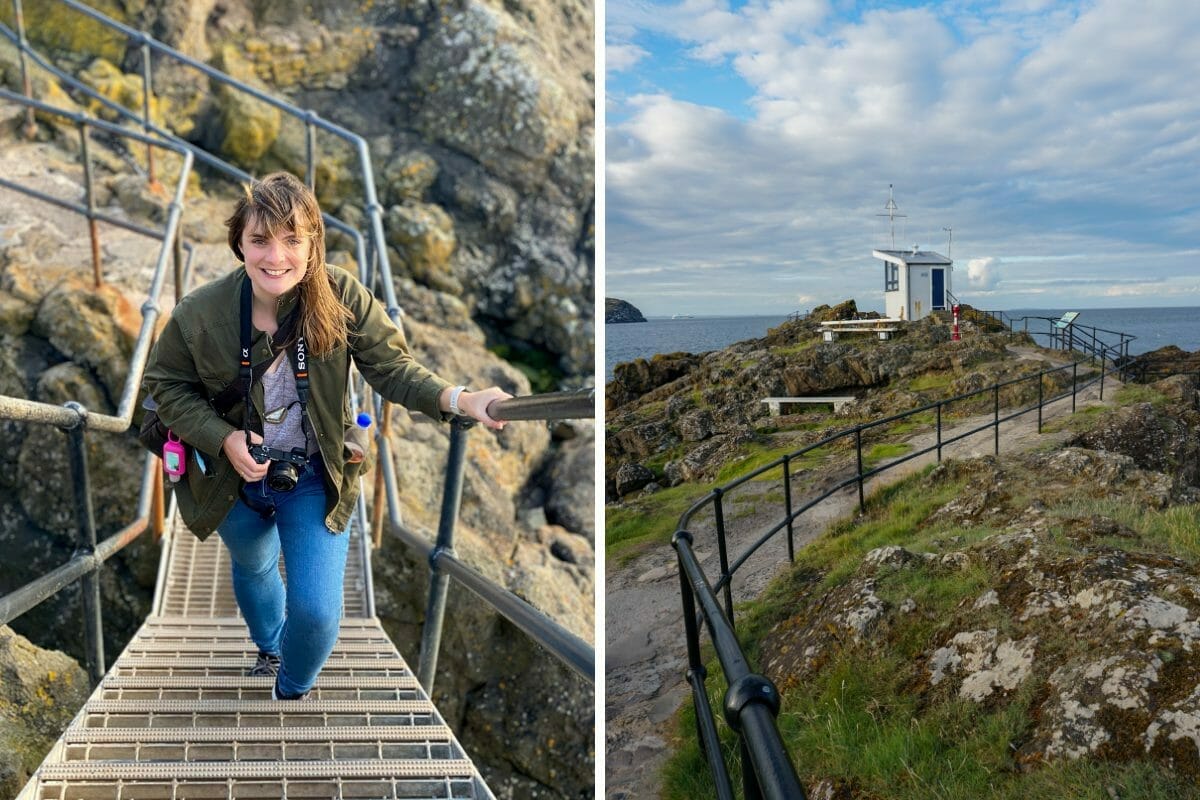 Part of me wished we could stay – for a few days, for the night, or even just for a drink outside the pub like the locals.

But alas, it was time for us to head back, although we couldn’t leave without a stop at the famous Alandas for a scoop or two of freshly made ice cream, which we enjoyed in the manicured gardens of the Lodge Grounds before getting back on the road.

By the time we drove off, the sun was setting, casting a halo of a glow above the dome of North Berwick Law. The rock had been my introduction to the town, and now it was our farewell too as it loomed over us, watching us leave the way we had come.

How do I get to North Berwick? My brother and I took the main route along the A1 for the best timing (it took us about 40 minutes), but he reliably tells me the longer drive along the coast is worth it for the scenery. You can also get the train from Edinburgh Waverley to North Berwick, which takes about half an hour.

Where should I stay in North Berwick? I haven’t stayed there myself (unfortunately!) but the Ark at Anchor self-catering apartment has incredible sea views, and I have my eye on it if (or when!) I make a return visit to the seaside town.

What is there to do in North Berwick? We had a glorious time simply wandering around the town and along the beach (and I can highly recommend the North Berwick Fry and Alandas for food), but if we’d had more time, I would have definitely visited the Scottish Seabird Centre and gone on a boat trip to Bass Rock. And of course if you’re a golf fan, there are a number of golf courses to visit, too. 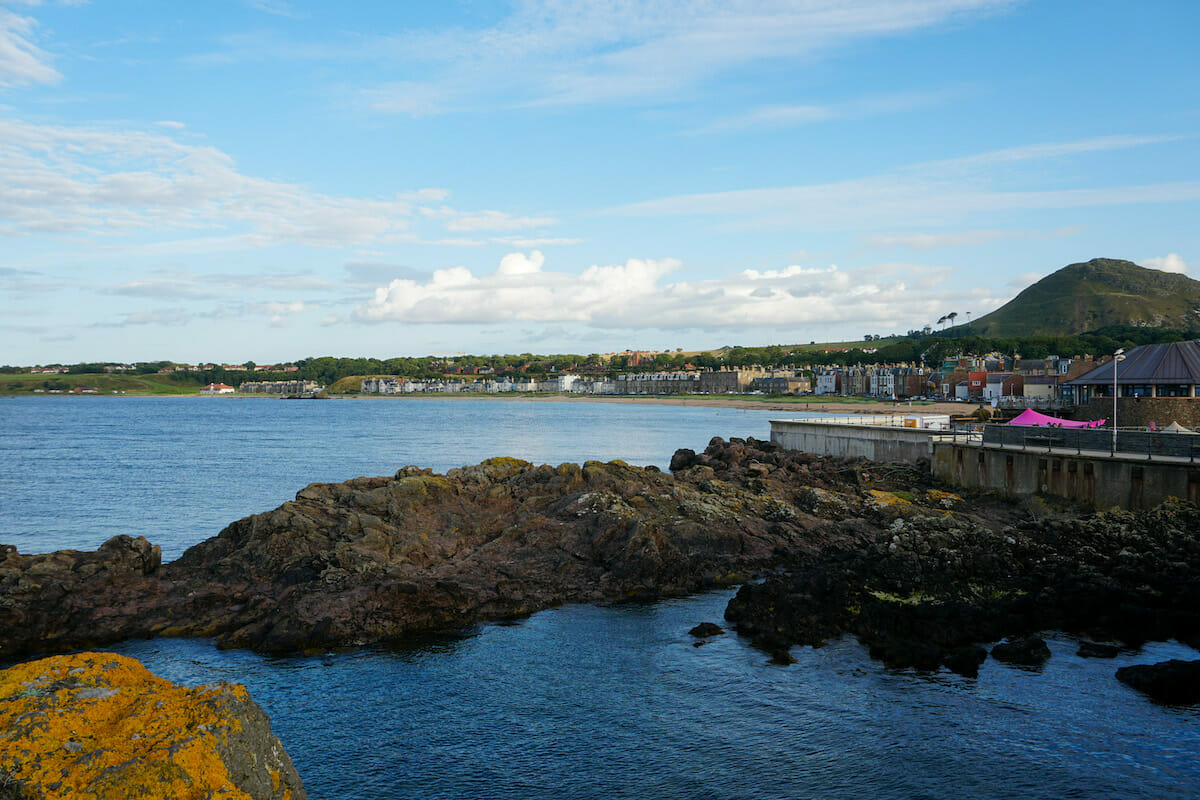 Have you ever been to North Berwick? What should I do the next time I visit? Let me know in the comments – I’d love to hear from you!

« Travel Plans and Dreams for 2022
An Afternoon at Carnish Beach, Isle of Lewis »