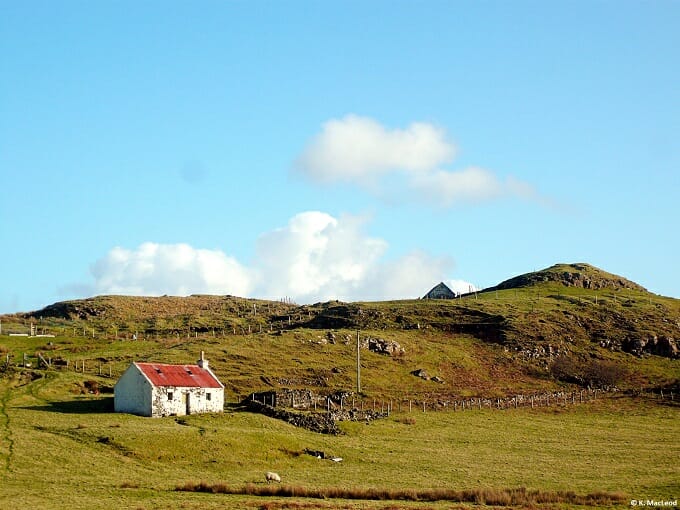 Probably one of the most well-known of the Scottish islands, the Isle of Skye is little more than a hop, skip and a ferry ride away from the location of my island intermission.  From Bonnie Prince Charlie to Robert De Niro, it attracts the rich, the famous and the far-flung tourists.  Despite this, it had never featured on my travel radar.  I had already lived on one Hebridean island; why would I want to visit another?

Everyone told me great things about Skye – and on screen, in films like Stardust and Made of Honour, it looks lovely – but our first meeting, at the end of January, was marred by the rain.  Portree is the main centre, and little larger than a village.  Propelled by a 5am start, pouring rain and a need for caffeine, I headed for a sign shouting “Cappucinnos.”  The Portree Hotel café wasn’t open, but the smiling receptionist held my suitcase and directed me around the corner to somewhere that could serve me a shot of the good stuff.

The real reason for my travels was work, and the final destination was not Skye, but Raasay – a fourteen mile long slip of land nestled between Skye and the Scottish mainland.  There wasn’t much to see on my first day, given the wind, rain and cloud cover so low you could almost walk through it, but my stay on this historic, heathery isle surprised me.

Waking up to views across the water to the Cuillin mountains was nothing short of spectacular.  Sadly, there was also much I missed – the cleared township of Hallaig on the east coast of the island; the walk up to flat-topped hill Dun Caan; the forest trails; the old mine works.

For all this, the highlight was undoubtedly the hospitality of the Raasay residents, from the elderly couple who filled me in on days gone by to the ten excitable children in the local school.  I even encountered some adventurous animals – not the wild deer on the northern hills, but a pet cat which has been known to drag sleeping ducks unawares into its owners’ home.

The clouds cleared on my return to Portree, showcasing the Cuillins in all their snow-topped glory by the roadside.  This was the home of Stardust I had seen on screen.  The Old Man of Storr and the pretty pastel-coloured Portree Harbour more than made up for the damp start to my travel tales with the island.

Last week the stories continued, as I returned to Skye for a second instalment of interviews and exploring.  Rain clouds were again awaiting my arrival, but there was no procrastinating in Portree as I set out in hire car number two along the winding road west to Dunvegan, historic home of the Clan MacLeod (not to mention local boy turned superstar, street trials biker Danny MacAskill). From Dunvegan, where homes line the loch, you can clearly see the hills of the legendary MacLeod Tables, party stop for the Clan chiefs of old.

Sheep struggled for control of the single-track roads en route to my next stop, the village of Glendale.  Here, in between countless chats and copious cups of coffee, I grabbed the chance to make the most of a rare hour of sunshine. I steered my way up the winding road to Skye’s most westerly – and surely most dramatic – edge, the cliffs at Neist Point.  Even in the chill air of February, tourists armed with cameras were walking near the edge.

Skye is, for many, a perfect slice of Scotland.  The island was recently voted into a National Geographic international top-ten list, and sees tourists flock from around the world in all weather.  Whether it’s for the friendly folk, age-old legends or stunning scenery, it’s worth following in the Young Pretender’s footsteps and sailing over the sea to Skye.

Visit: Calum’s Road, at the remote northern edge of Raasay.  Whether you walk, run, or ride, it’s an experience like no other.  It’s not that cliff edge turn that takes your breath away, but the fact that these two miles of tarmac were laid by one man in his mid-sixties over the course of twenty years.  The book of the same name is a must-read before making the journey.

Eat: The Red Roof Cafe Gallery in the village of Glendale has folk music, original art and exquisite local eats.  The awards keep coming, and so do the customers.  Don’t miss it.