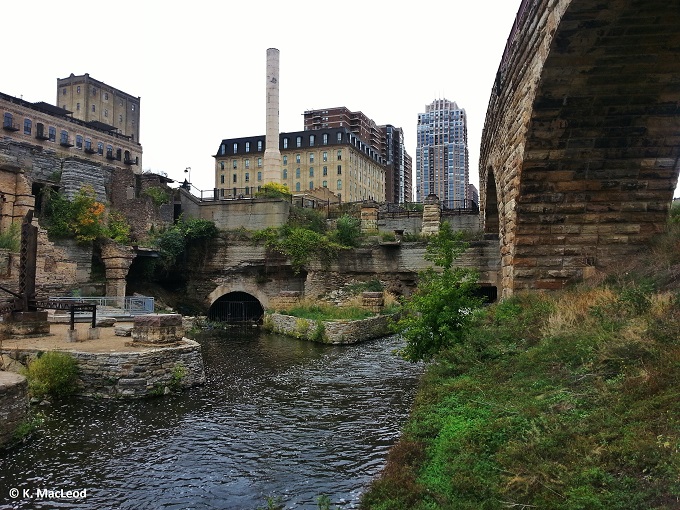 I stumbled on the ruins by the Mississippi quite by accident, while trying to get a good snapshot of one of Minneapolis’ main landmarks, the Stone Arch Bridge.  There were crumbled bricks and rusted machinery by the river, where foam rushed from a waterfall, and clearly converted warehouses on its banks.  This was Mill Ruins Park, I soon learned; a park where important points of city history meet.

The approach of the twentieth century saw Minneapolis become the world’s largest flour producer, a title it would retain until the First World War.  Remnants of the city’s industrial history are everywhere, not just in Mill Ruins Park but scattered across the skyline in long-dead chimney towers, renovated warehouse blocks and street names like Betty Crocker Drive and General Mills Boulevard.  It almost makes the city more appealing to me, the presence of a history so well known here but almost unheard of elsewhere.

The waterfall I spied from the Stone Arch Bridge – which affords fantastic views of the city skyline – was in fact St Anthony Falls, a natural site central to the settlement that would soon become the city of Minneapolis.

From the Falls came the power that generated the mills along the Mississippi, one of which, the Washburn, was the largest flour mill in the world.  Although it closed in 1965 and was almost destroyed by fire in 1991, the ruins of this once-crucial building have been expertly incorporated into an architectural piece of art in what is now the Mill City Museum.

With glass walls towering out of an old brick shell, the Mill City Museum is impossible to miss from the river.  It was the museum’s unusual external appearance that led me to explore the offerings inside.  A host of interactive exhibits make it perfect for little kids (and big ones too); a class of local children were busy baking cookies in the Baking Lab the afternoon I arrived. 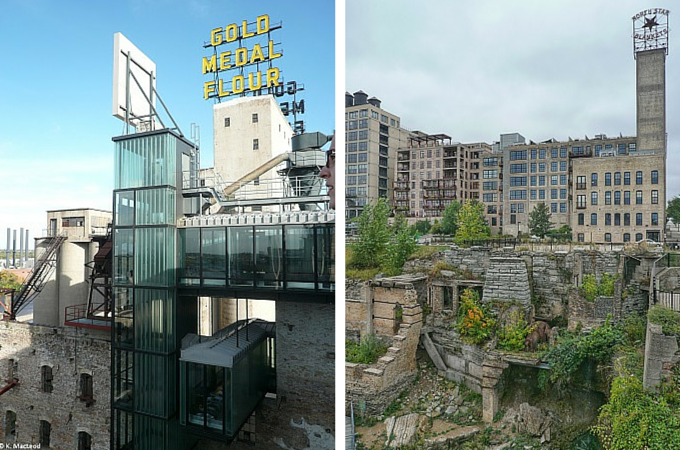 After a short, comic film on the city’s history, I made for the ‘Flour Tower’ exhibit, a ride on an old elevator through several floors of recreated scenes from the mill’s past, complete with fires, explosions and snapping machinery.  Clever technology aside, it was the real-life recorded memories of old mill workers reminiscing on days gone by that gave this exhibit the edge.

Our tour guide was enthusiastic and friendly, taking us further into the history of the local industry as we exited the elevator on a different floor.  She explains the importance of the giant vacuums that removed the deadly – in more ways than one – flour dust from the air.  It was this dust that caused the original mill building to burn to the ground in the late 19th century, causing an explosion that those 25 miles outside of the city mistakenly identified as an earthquake.

From the flour vacuums we filed into yet another elevator, a glass one that quickly shoots to the top of the strange structure that houses the museum and leads us out onto a rooftop observation deck.  Here history is laid out before you in all its panoramic glory: the Mississippi River, St Anthony Falls, the curve of the Stone Arch Bridge, the old mill sign still standing tall.  I was lucky I visited in the autumn and not the depths of a Mid Western winter; we would have been unable to step outside into the cold.

Even for that view alone, the Mill City Museum is worth a visit.  With everything else it has to offer, the Mill City Museum should be a must-see for visitors to this Mid West metropolis, allowing an in-depth, entertaining look into the city’s personality.  For Minneapolis is a city that, despite its size, feels like a friendly hometown you’re somehow already familiar with.  As I found out, there’s more to the Mill City than meets the eye. 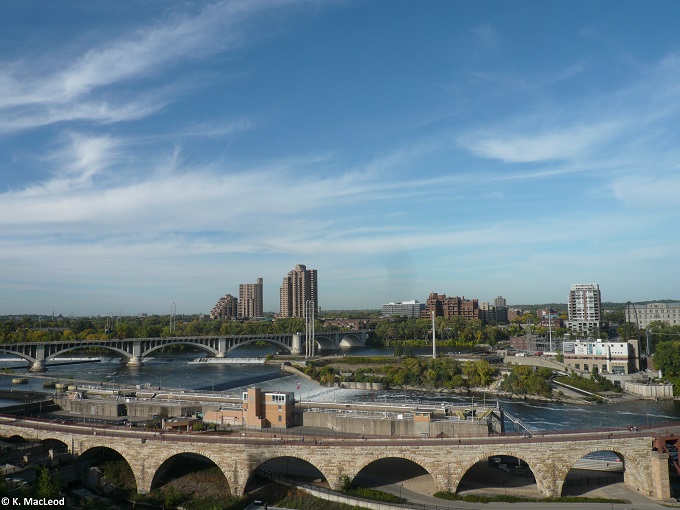 Have you ever visited Minneapolis, or would you like to? Let me know in the comments below – I’d love to hear from you!