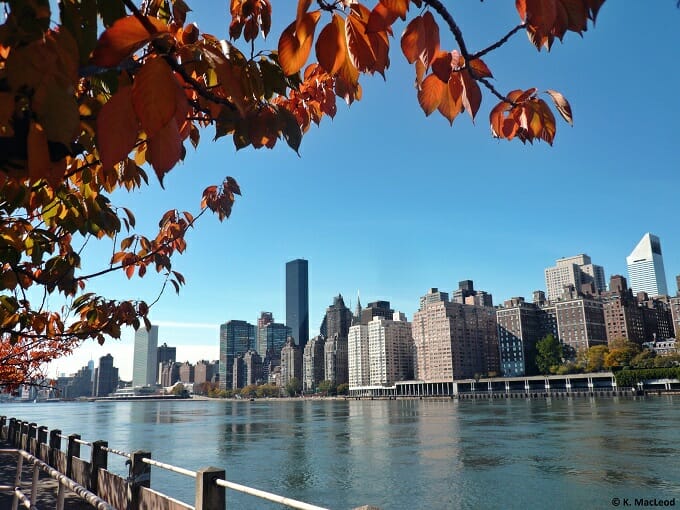 The woman next to me on the bus seemed perplexed at the presence of non-natives. Surrounded by local commuters, three Brits were certainly out of place. Her island home has long been used to isolation, and even now visitors are relatively scarce.

But this island of intrigue is not in some remote corner of the world. It lies a few hundred feet from one of the busiest places on the planet: Manhattan.

Sitting in the shadow of the Queensboro Bridge in New York City’s East River, Roosevelt Island is still something of a mystery, even to those who live on either side of it. During the summer months Roosevelt Island receives a mere fraction of the millions of visitors who make for Manhattan (the borough to which it belongs), so it is no wonder the resident on the island’s only bus seemed surprised to see us in the early days of winter.

Roosevelt Island has been something of a geographical recluse throughout its history.

Acquired by the City of New York in 1828, it was originally named Blackwell’s Island, after the family who had farmed there, and became notorious as a home to what the New York Times describes as “Dickensian horrors”, among them a prison, a lunatic asylum, a smallpox hospital, and a workhouse.

It was renamed Welfare Island in 1921, when the city began a series of reforms; but it wasn’t until 1971 that it was revamped as Roosevelt Island and a new residential community was developed. 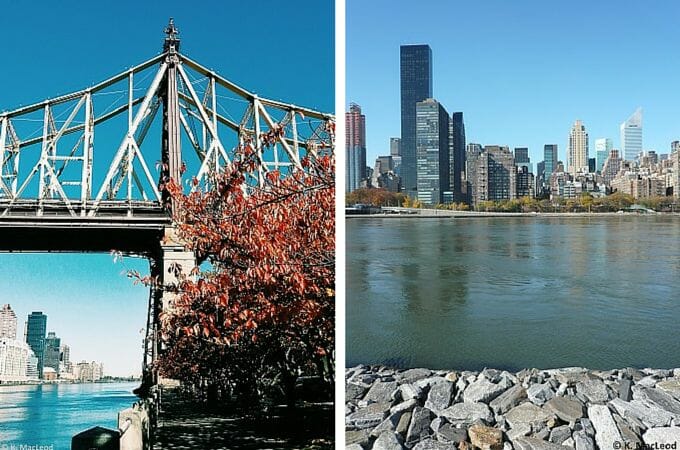 Getting here is a bit of an adventure.

The six minute ride on the Roosevelt Island Tram, the country’s only aerial commuter tram (or cable car), is quite the experience. Buildings lurch upwards; miniature cars speed down the street; noses press up against the glass as the water comes into view, and the skyline sneaks into sight in between the links of the bridge.

For many, the tram is the main attraction, drawing visitors for the spectacular sight of the city from above, all for a mere swipe of your MTA subway card. Most turn around and get straight back onto the tram, but it would be shame to miss what Roosevelt Island has to offer.

Strolling southwards along the edge of the river under a canopy of autumn leaves, what struck us most – along with the views of the New York skyline, of course – was the relative silence.  Roosevelt Island, with virtually no cars, was blissfully quiet after the (enjoyable) assault on the senses that is Manhattan. It feels far removed from the hustle and bustle across the river, more of a small town than an outpost of the city that never sleeps. 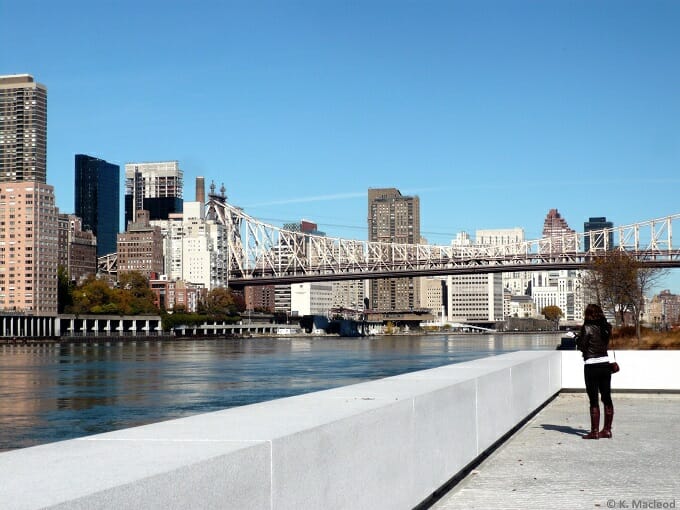 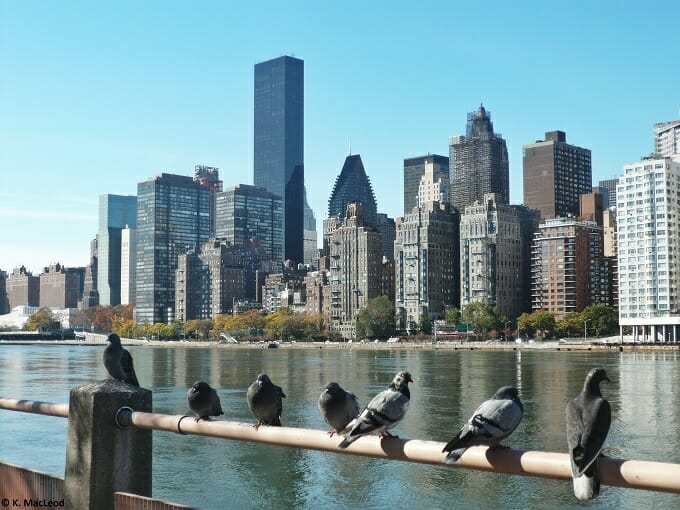 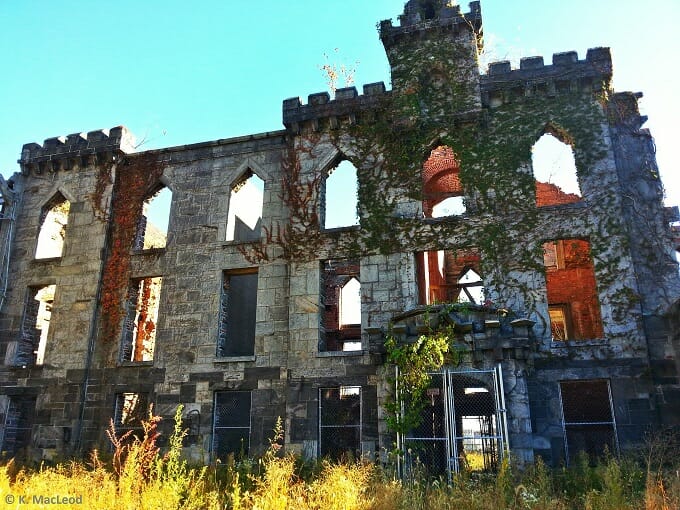 There are six historic landmarks here, each representing a chapter of the island’s chequered past.

One of them is the former smallpox hospital, left to decay after a vaccine for the disease was discovered in the late 1800s. The Gothic-Revival style building, half-clad in crawling ivy, is impressive, if slightly spooky even in daylight.

Now there is a another attraction. Four Freedoms Park opened in 2012, and celebrates both President Roosevelt and the freedoms championed in his famous State of the Union speech in 1941 – freedom of speech, freedom of worship, freedom from want, and freedom from fear.

The friendly woman at the information kiosk told us it was reminiscent of the monuments in Washington, D.C., and she was right – the memorial to Franklin D. Roosevelt is a stately shade of white, a spacious lookout point perfect for reflection and a park space primed for summer picnics. It feels appropriate to be faced with an inscription of the Four Freedoms while the spectre of the UN headquarters is standing tall across the water.

Roosevelt Island is definitely a place I will return to – in the sunshine, armed with the aforementioned picnic.

But with the arrival of the Four Freedoms Park, and the scheduled development of a new Cornell University campus in 2017, it seems a safe bet that Roosevelt Island, with its air of intrigue, won’t remain a mystery for much longer. 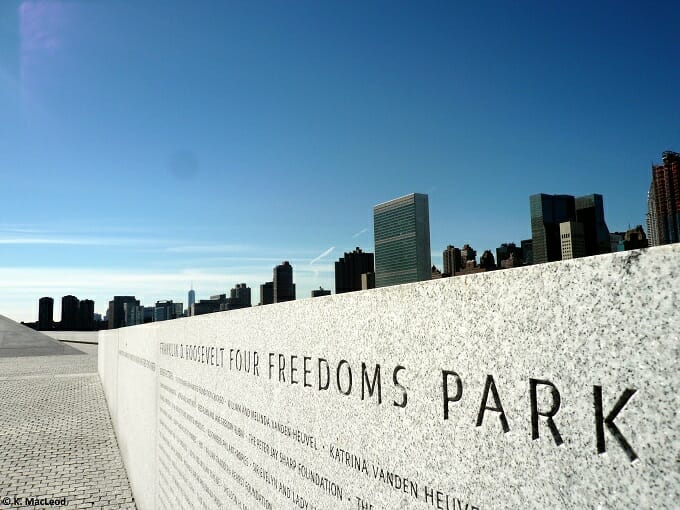 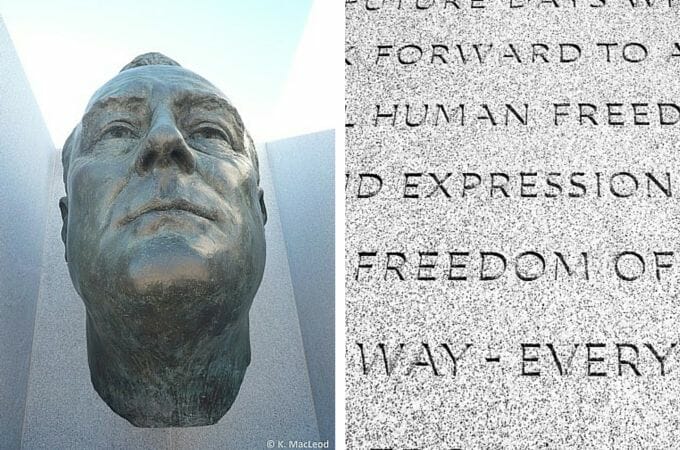 Have you ever been to Roosevelt Island, or would you like to visit? Let me know in the comments – I’d love to hear from you!