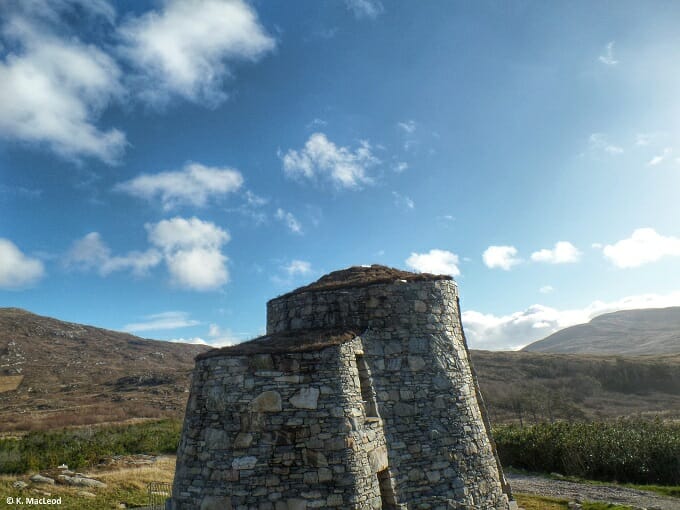 During our drive the rain was so heavy it hid the sand-swept Harris coastline like a curtain.

On reaching our destination, however, the wild Scottish weather hardly mattered: The Broch is so spectacular that there would be no need to venture outside its thick, circular stone walls.

Situated on the Borve Lodge Estate, the award-winning Broch, despite its distinctive design, is easy to miss from the main road. That’s because when they say secluded, they mean it. The Broch was built to disappear into its surroundings, looking almost like an extension of the rock-strewn moorland.

Inspiration for the building came from broch ‘dwellings that were scattered across the Scottish coastline during the Iron Age’, and the vision of the owners was ‘to make it appear as if 21st century comforts had been transplanted within an ancient ruin.’

Their efforts were certainly successful, as The Broch blends into the landscape, while the influence of the elements is evident inside too.

Slate counters and local wood and stone accents give the ground floor kitchen a sophisticated, minimalist feel. The staircase steps, carved from windblown beech trees, cling to the circular walls, and are lined by intricate iron railings interspersed with sea-coloured glass. Almost everything in the building is bespoke, from the shelves in the kitchen to the stone around the bathroom sinks.

On the second floor – split into a comfortable living room and modern bathroom – the fireplace has been framed from the remains of an old wharf. The third floor is perhaps the most decadent of all, starring a giant four poster bed under a circular skylight, and in front of a window that runs the full height of the building, providing panoramic views over one of the most beautiful sights in Scotland: the west coast of Harris. Luckily for us, the rain had cleared by the next morning, showing this sunlit scene in all its glory. 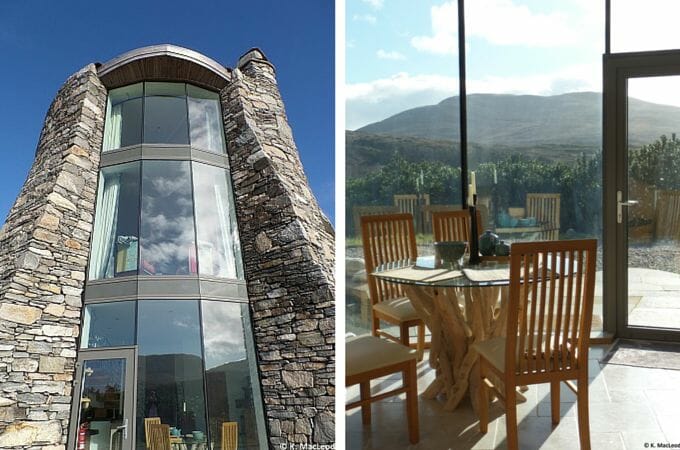 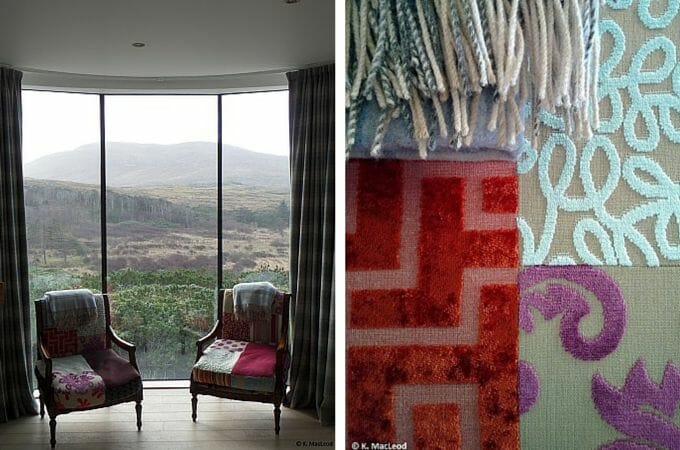 The accommodation is self-catering, fitted with top-of-the-range kitchen appliances and Bialetti coffee equipment.

On arrival, however, we were greeted with a bottle of chilled white wine and some local goodies: oatcakes, tablet, and fruit cake fresh from a Luskentyre kitchen.  Dessert for dinner was definitely a tempting idea.

While The Broch is an architectural and design marvel, it’s also perfect for relaxation, designed specifically with couples in mind. There’s the aforementioned four poster bed; fluffy bathrobes for two; sweet smelling toiletries from the Scottish Soap Company; a top of the range flat screen TV; and a selection of board games perfect for playing by the glow of the stove on a wild island evening.

(As someone obsessed with words, I’m afraid to say I lost at Scrabble by the glow of that stove every single time.)

Scrabble sorrow aside, it was the details at The Broch that really drew me in, the colours and fabrics set in contrast against the white walls, wooden floors and furniture, and local stonework. The attention to detail goes further than design, and focuses on comfort too. Not only do the Harris Tweed curtains frame scenes of the sea outside, but the underfloor heating keeps you warm as you watch the waves surge onto the shore.

The Broch at Borve Lodge is truly unique, both in design and atmosphere, expertly marrying luxury with a local edge that hints at the natural landscape beyond its walls.

For a few indulgent lazy days, The Broch felt like home – a very luxurious home, and our very own Hebridean hideaway. 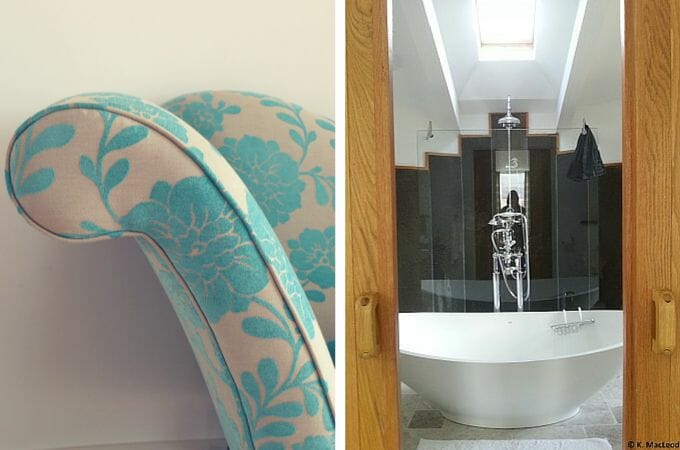 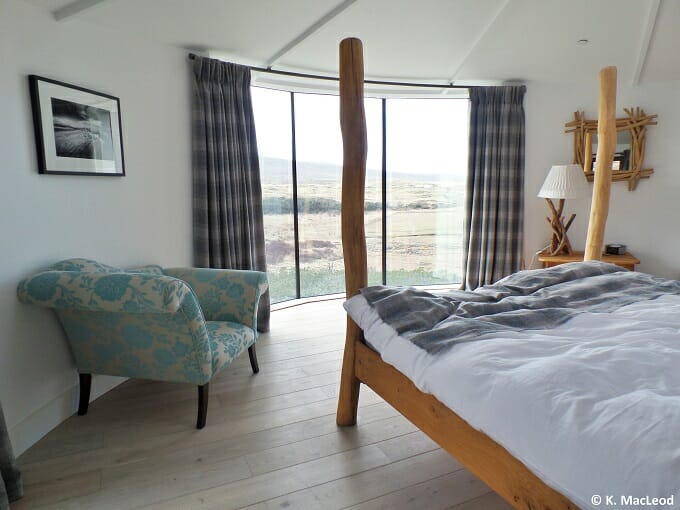 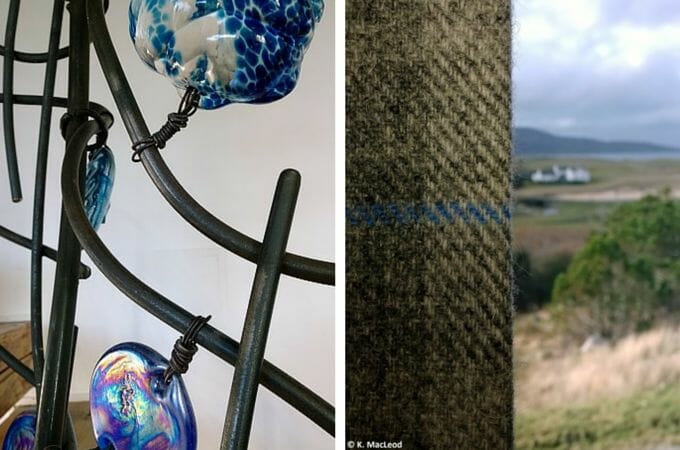 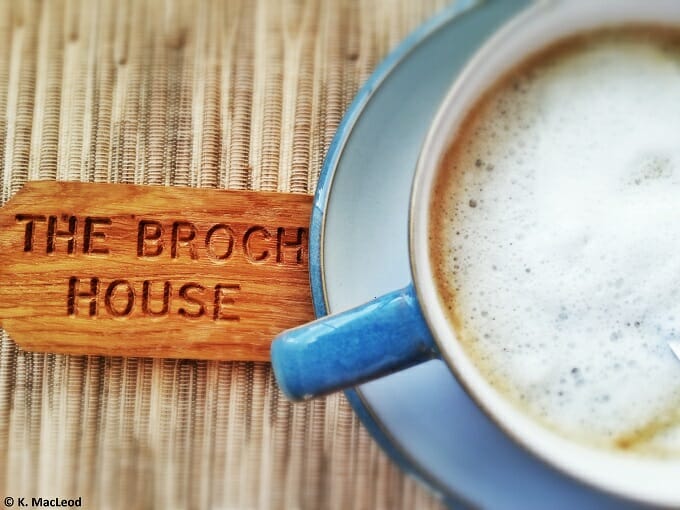 How do I get to The Broch?  Part of the Borve Lodge Estate, the Broch at Borve Lodge is located in West Harris, and can be reached by driving south along the A859 road from Tarbert, or north along the same road from Leverburgh, both ports for Caledonian MacBrayne ferries.

What do I need to bring with me?  A welcome pack of local Hebridean goodies will be waiting for you (think tablet, oatcakes, and salmon), but it’s best to bring essentials like coffee, milk, and food to cook with for when you aren’t eating out.

How much does it cost? A minimum three-day stay is required at The Broch, and when we stayed in March 2014, prices started at around £400.

What do you think of the Broch at Borve Lodge? Have you ever stayed anywhere like this on your travels, or would you like to?

A Holiday At Home on the Isle of Harris

« Reading My Way Around the World: How Being a Bookworm Inspires Wanderlust
Evacuated from Kenya: The End of an Adventure »