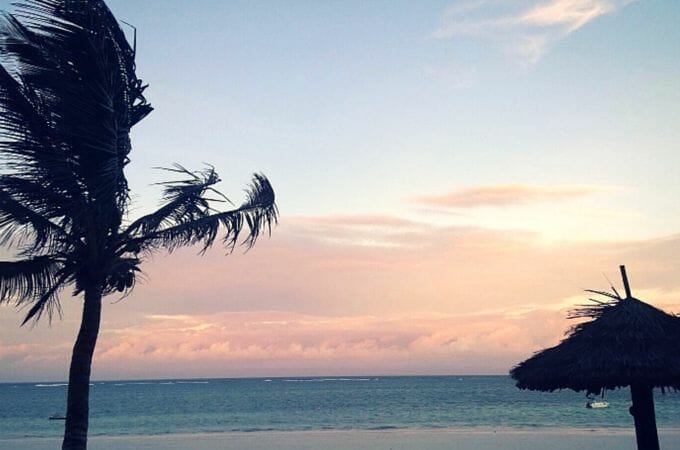 We drove through Diani as the sun was setting, the palm trees stark against the pink-hued sky.  Night had fallen by the time the bus reached the poor suburb of Likoni, just south of Mombasa island.

The muddy, pot-holed streets were still bustling after 7pm, full of people, tuk tuks, bicycles, and buses.  Late night shopping was taking place by candlelight, and in a few cases, the glow of a naked light bulb.  Over-ripe bananas were strung out above wooden market street stalls.  Children were still traipsing past in pristine school uniforms, while women tended to pots heating over small open fires.

I drank it all in, because I was leaving.  Along with 400 other British tourists, I was being evacuated from the Kenyan coast.

The news that the Foreign and Commonwealth Office (FCO) was now advising against all but essential travel to Mombasa (an hour north of Diani, where we were staying) was discovered in bits and pieces.

Walking through the gardens to dinner at Diani Sea Resort on Wednesday, I remarked that the restaurant was looking unusually quiet.  The hotel reception area, however, was full: clusters of residents talking animatedly, holidaymakers phoning home, Stacey (the local Thomson rep) surrounded by questioning faces.

Information passed from person to person.  As the FCO had added Mombasa to their no-go list, Thomson was sending us home – the next day.  Without any concrete information, rumours spread like Chinese whispers, getting more extreme with each telling.  Stacey eventually spoke to us all, dismissing the rumours of shootings and murders nearby, but saying that for our safety, Thomson was following the advice of the FCO.

My first reaction was disbelief – I had been exploring the streets of Mombasa just yesterday! I didn’t feel unsafe, whether in  Diani, Mombasa, or out on the open plains on a Kenyan safari; then again, I had always been with a local guide.

I wondered if our bus journey to the airport – a convoy of tourist coaches, each with a police officer on board – would be different now, unsettling. It wasn’t.  It was surreal, due to the circumstances, but no different to any other drive through Mombasa I had been on before.

The streets were still chaotic. The stalls were still stocked. The roads were still bumpy. The Likoni ferry to Mombasa island was still as unbelievably crammed as ever.  The only unusual addition was the presence of TV cameras at the airport.

Evacuated. It didn’t feel like an evacuation, or what I would have imagined one to be like.  Contrary to the fellow tourist interviewed on BBC News yesterday, I didn’t feel frightened.  I felt sad: sad at leaving this incredible country earlier than expected, and desperately sad for the people – the hotel staff, the shop owners, the local tour operators – whose livelihoods, dependent on tourism, are being effectively destroyed by our departure.

In my short time there, I learned that Kenya is a wonderful country, filled with beautiful landscapes and friendly people, and I can only hope – for Kenyans and tourists alike – that the security situation is resolved sooner rather than later.  When it is, I’ll be heading straight for the Kenyan coast and the Indian Ocean, to finish the adventure that ended early.

Have you ever been evacuated, or had to leave somewhere unexpectedly?