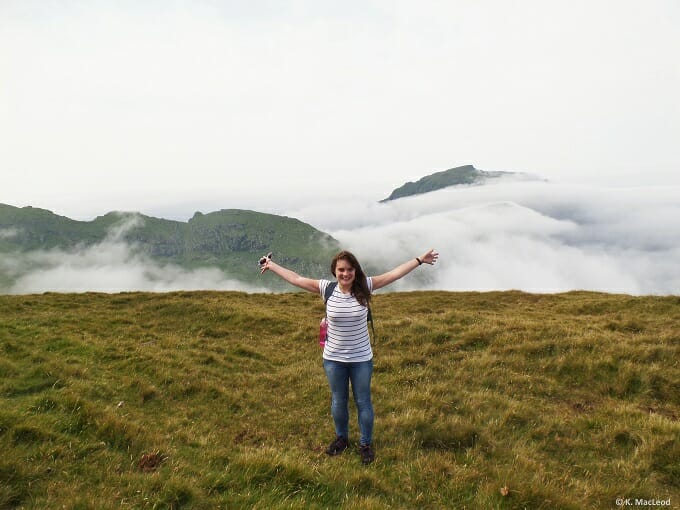 The fog enveloped the Enchanted Isle as soon as it left Leverburgh Pier.

Setting out on the Sea Harris boat into the Sound of Harris and the Atlantic beyond, I was embarking on what is surely the ultimate Hebridean adventure: a visit to St Kilda.

This remote archipelago – a National Nature Reserve and double World Heritage Site – lies 41 miles west of the Outer Hebrides, and consists of four main islands and offshore sea stacs.  Often described as being at ‘the edge of the world,’ it is only as you approach St Kilda through the fog, dramatic rocks rising suddenly out of the ocean, that you even begin to understand the extent of its isolation.

After a bumpy but comfortable three hour journey, the Enchanted Isle anchored in Village Bay and we were ferried by dinghy to the jetty, where we were greeted by a National Trust for Scotland representative.  She filled us in on the various hikes and historical spots, but many were out of bounds that day: we were warned not to hike into the mist, in case we accidentally walked off the edge of what are the highest sea cliffs in Britain.

With that sobering point firmly anchored in my thoughts, my dad and I set off to explore Hiorta, the main island, and the only one that was inhabited on a permanent basis.

The St Kildans lived here for thousands of years, and until the last islanders were evacuated in 1930 they survived on harvesting seabirds, fishing, and growing crops.

The evidence was right in front of us.  There’s the Church, a severe and spartan space built in 1820.  A door next to the pulpit leads off to a small school room, restored to reflect how it looked in the early 20th century.  The first few houses on the main street have been renovated to provide accommodation to National Trust and defence sector workers, while the third is now a small and interesting museum, documenting the history of St Kilda. 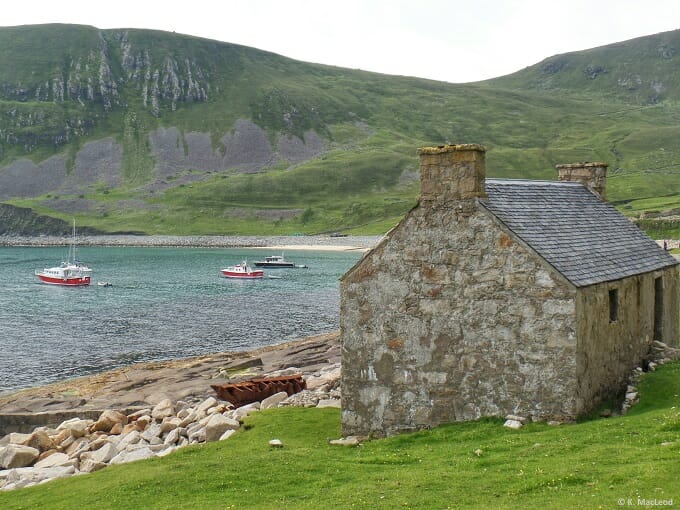 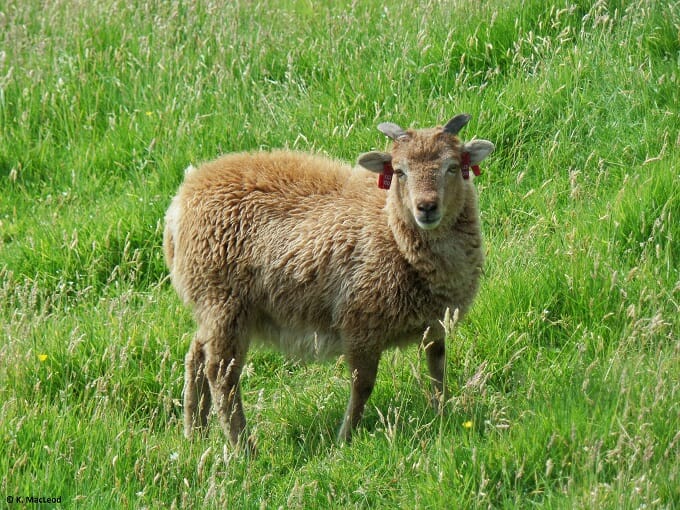 All that really remains of the community are this abandoned village, stone cleits, and wild Soay sheep, a breed found nowhere else in the world.

Lots (or strips) of land, stretching from the street to the shore, are still faintly visible in the grass.  Cleits, the stone stores used for seabirds, eggs, or turf, are everywhere, dotting the landscape behind the village, and cropping up across the island in somewhat precarious looking positions.

The slopes of Hiorta seem to rise gently from here, but as we climbed the road (built by the Ministry of Defence, who have had a base here since 1957) my calves soon told me otherwise.  Higher up, the temperature changed from hot to cold as the sea mist rolled in and out, obscuring and then revealing our view of the village below.

From the top, the sight was like one you might see out of a plane window: mountains breaking through bright white cloud.  It truly felt like the edge (and top) of the world.  Village Bay looked a long way down; the tip of Boreray was visible in the distance; and as the cloud shifted, I spotted the Lover’s Stone.

Legend has it that in order to prove themselves worthy of marriage, the men of St Kilda had to show they would be able to support their future family by climbing the rocks for food.  To do this, they had to walk to the edge of the Lovers’ Stone, which juts out over a cliff edge, and demonstrate their skill by balancing on their left foot while making a fist over their right.  It’s a story I’ve heard many times, and I felt a jolt of recognition as the stone appeared through the mist.  Needless to say, I wasn’t proving myself anywhere near cliff edges that afternoon. 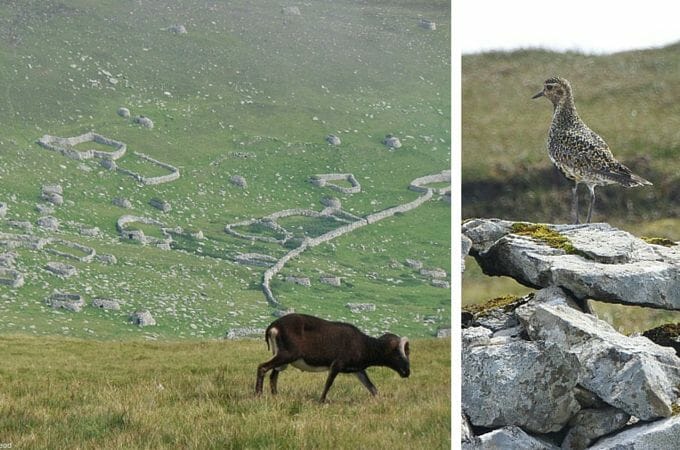 With our four hours on the island running out, we started to make our way back down to the bay, stopping to sit on some stones at the side of the road to refuel with our packed lunch and plenty of water.  It was surprisingly hot, despite the mist that refused to move.

Back at Village Bay, we had time to take another stroll through the village.  The abandoned houses furthest from the jetty are open to the skies, missing windows and doors; inside, weeds and wild flowers grow where you can imagine maybe a table once stood, or an armchair once sat by the fire.  Small slates sit in empty fireplaces and on old doorsteps, marked with the names of those who were last to leave, and who called these four walls home.

Walking along the grassy main street felt strangely sad; the stone remains left a lingering sense that this is a land in mourning for the loss of its people.  Maybe all abandoned communities have this atmosphere, but at the edge of the Atlantic, where day-to-day life was a struggle, it felt especially poignant. 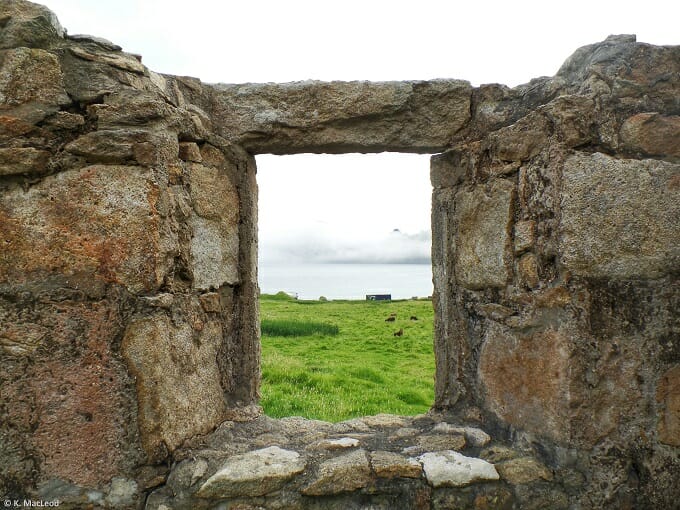 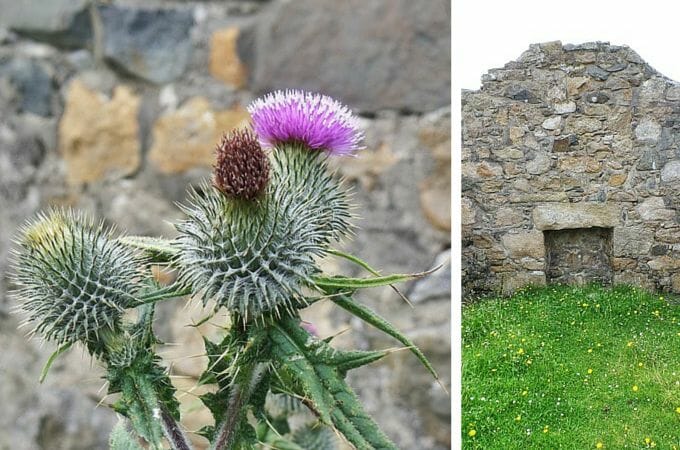 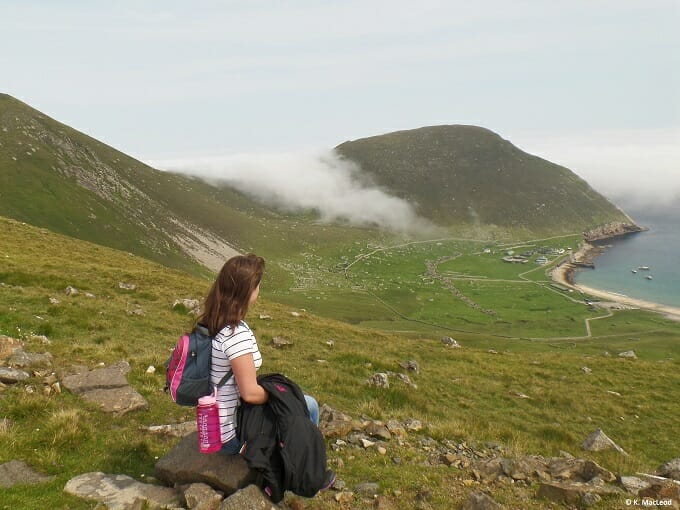 By 3.30pm we were all back on the Enchanted Isle, flushed with excitement, and in my case, sunburn.  Before setting off on the next stage of the adventure, our Sea Harris crew treated us to a surprise tea and coffee, and some very tasty home baking.  Anyone who knows me well is aware that cake (or sweets of any kind) are a sure fire way to win my heart.

What we saw next was incredible.

If it was near-impossible to imagine people living on Hiorta, then it is beyond the realms of imagination to envision them staying on Boreray and its sea stacs, where we sailed after our coffee break.

The stark black rocks of Stac Lee, daubed white by the guano of thousands of sea birds, seemed to rise up out of nowhere, sinister and foreboding in the sea fog.  I was awestruck at the sight, an awe tinged with the faint fear of isolation, knowing there was nothing but our boat, the rocks, and the ocean for miles.

Danny, one of the two crew members, explained how the St Kildans would sail here in the summer, and a few of the men would climb the rock, staying in a bothy built on a cliff edge, in order to harvest the gannets that provided the islanders with food throughout the winter. Looking at the sheer cliff face of Stac Lee in front of us, it seemed impossible that a man could get onto the rock, let alone climb it and stay there. 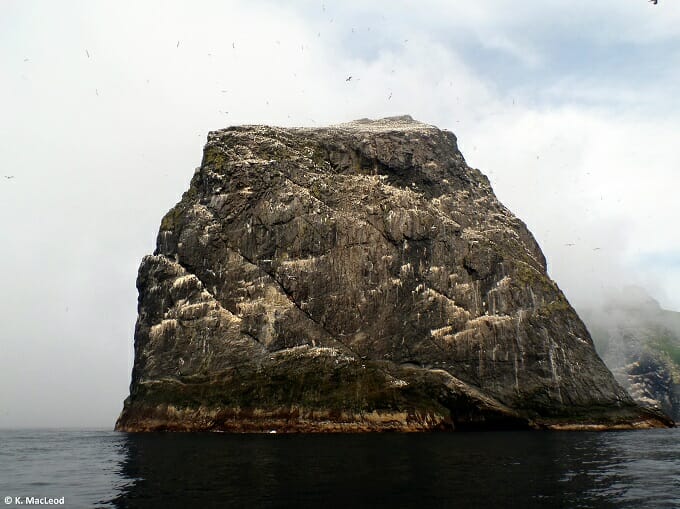 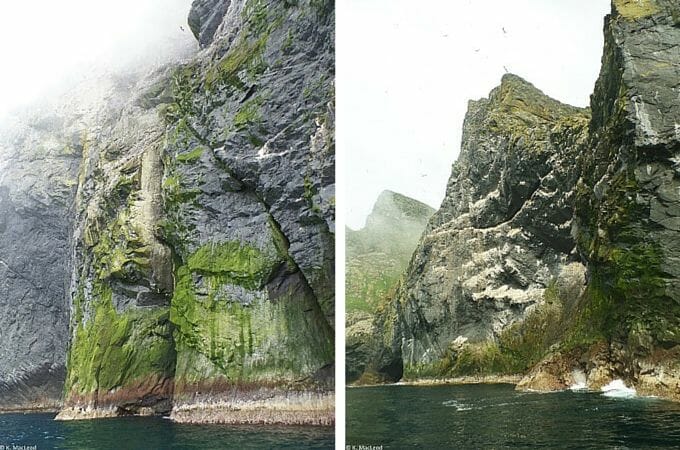 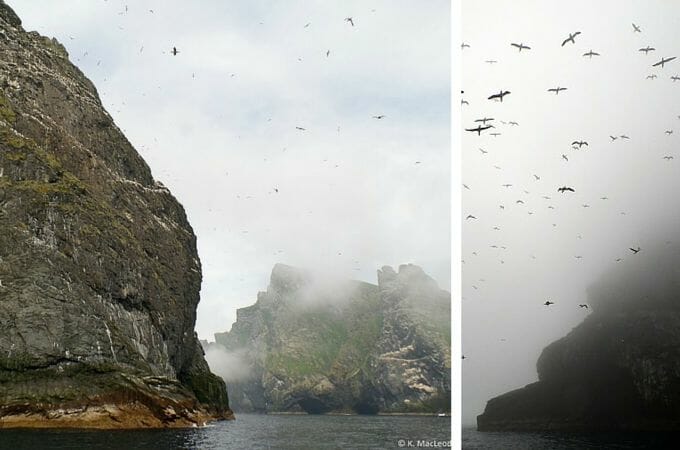 Describing Boreray and the sea stacks as dramatic would be an understatement, but extreme adjectives don’t do the sight justice either.

The rocks seemed to be brooding as the fog shifted around their jagged summits, while thousands of birds – gannets, fulmars, skuas, and puffins – wheeled in the air above us.  Craning my neck upwards, I heard Danny say that at its highest point, Boreray is three metres taller than the Empire State Building.

As we sailed around a corner at Stac an Armin, the sun disappeared, the air cooled, and a cloud of thousands of birds filled the air above and around us. It’s a scene that wouldn’t have been out of place in Hitchcock’s horror film, The Birds – but it was a spectacular one.

Surviving on these outposts for a few weeks seemed impossible, so Danny’s next story was even more surprising.  In 1727, an outbreak of smallpox on Hiorta meant no-one was able to collect the three men and eight boys who had been left at Stac an Armin to collect gannets. They survived here for nine months, until the following spring when the Steward arrived from the mainland and rescued them. At this point, my jaw dropped even further.

Circling back to Boreray, the sun returned and the sea calmed.

From the helm of the Enchanted Isle, Innes steered the boat close enough to the cliffs so we were able to see guillemots – which look uncannily like mini penguins – nesting, and puffins fluttering from a swim in the sea to their nests on the grassy cliffs. We were in the midst of the world’s largest colony of gannets, and Britain’s largest colonies of both fulmars and puffins; in total, there are around one million birds here, and it was wonderful to watch them soar in the skies above us.

Even as we left St Kilda behind and started sailing back towards the Western Isles, I couldn’t bring myself to go inside quite yet. I stayed standing on deck, clinging to the rails as we sped through the waves, trying to take in everything I had seen and experienced: the history, the wildlife, and the natural environment.

When I did go inside to sit in one of the large, comfy, airplane-style seats, I promptly fell asleep. Clearly, the 5am start, combined with the hiking, history and excitement of finally seeing St Kilda, had taken its toll (in a good way, of course).

Back on dry land, I’m not sure that blog posts or books, photos or films, can really explain the St Kilda experience.

Naturalist James Fisher wrote in 1947 that “the future observer of St Kilda will be haunted the rest of his life by the place, and tantalised by the impossibility of describing it, to those who have not seen it.” In other words, nothing can compare to seeing St Kilda, the islands at the edge of the world, for yourself.  Visiting St Kilda truly is the ultimate Hebridean adventure. 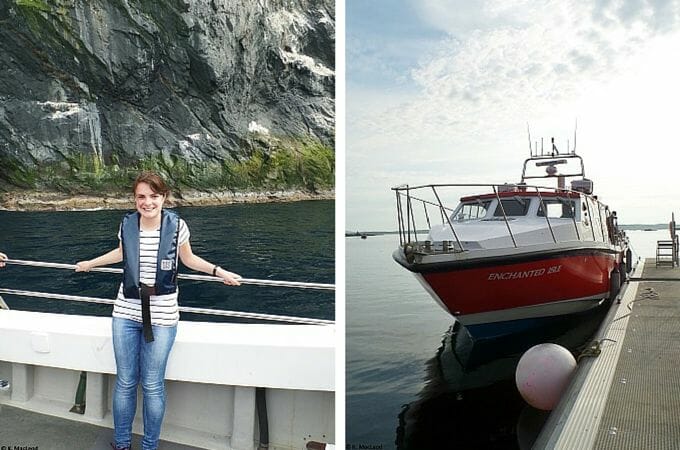 How do I get to St Kilda? I sailed to St Kilda with Sea Harris, who leave from Leverburgh pier on the Isle of Harris at around 8am and return about 7pm. Check out their website (or Facebook or Twitter) for more details on their boat trips.

When can I visit? Boat trips to St Kilda only run in the summer months, usually between April and September, so make sure you book your journey well in advance!

Have you ever visited St Kilda, or would you like to? Let me know in the comments below – I’d love to hear from you!