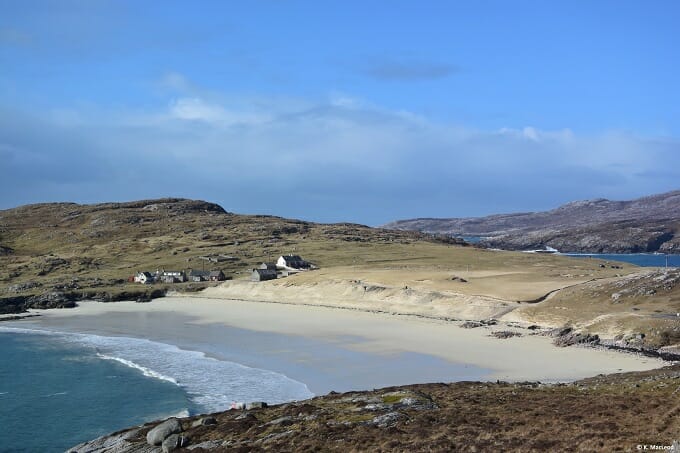 I had heard horror stories about the road to Huisinis.

“Don’t drive there on your own.”

Admittedly, that last warning may have had more to do with my driving skills than the state of the single track road that branches off from the A859, which leads south through the Isle of Harris, but still: I had never taken the chance and turned that corner.

That was until I had an accomplice (who was also, crucially, willing to drive).  One gloriously sunny spring day, my brother and I set off for Huisinis, the sandy reward at the end of the infamous road.  We set off early – you never know if the sunshine will last in the Outer Hebrides – and made up for our early start with a detour to the Harris Distillery for warm scones, cream, and jam to keep us going through the day.

The road to Huisinis is indeed a difficult one; even I could tell that from my viewpoint in the passenger seat.  It’s also beautiful, winding up and down hills and around blind corners, with a different dramatic view awaiting you each time. 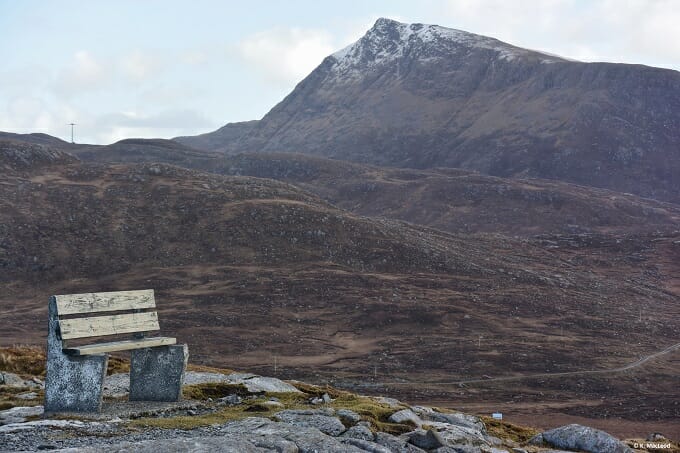 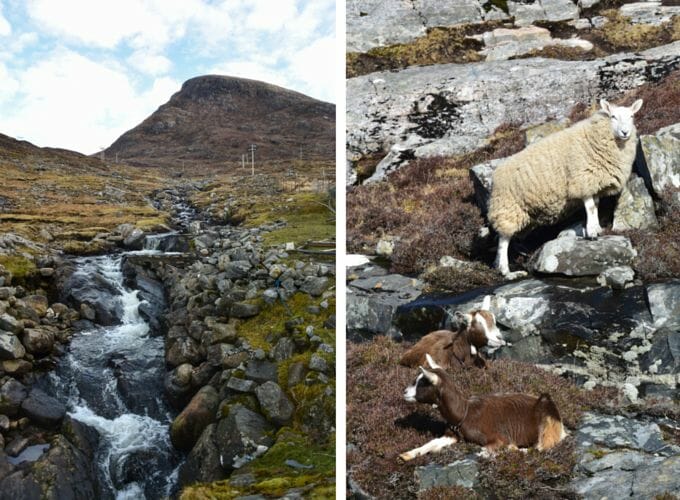 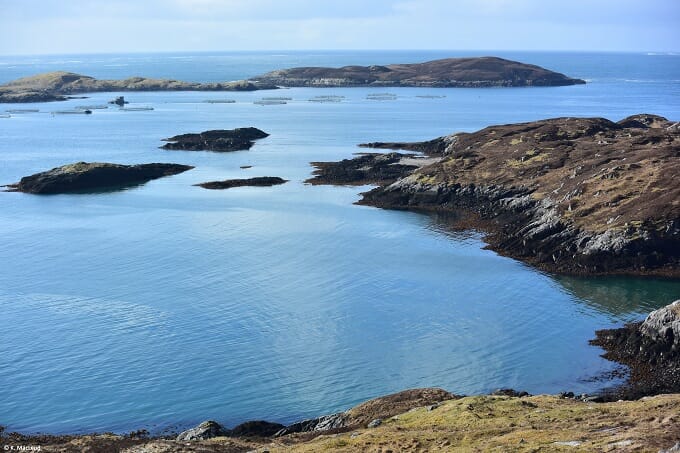 There are wide glens reaching out into the Harris hills, and vantage points across the still waters of West Loch Tarbert and the Sound of Taransay.

We spotted piles of cut peat drying by peat banks, numerous sheep attempting to claim right of way, and eagles circling in the skies high above us.

Houses are few and far between on the road to Huisinis, but one stands out among the rest – and it’s not a house. It’s a castle. Amhuinnsuidhe Castle has been run as a sporting estate for most of its 151 years, offering fishing, field sports, and high-end accommodation. The mother of the original owner, Lady Catherine, was even involved in encouraging the early Harris Tweed industry.

We stopped by the waterfall in front of Scottish Baronial-style building for some photos, before carrying on our journey – we could see rain clouds over Taransay, and didn’t want them to reach Huisinis before we did. 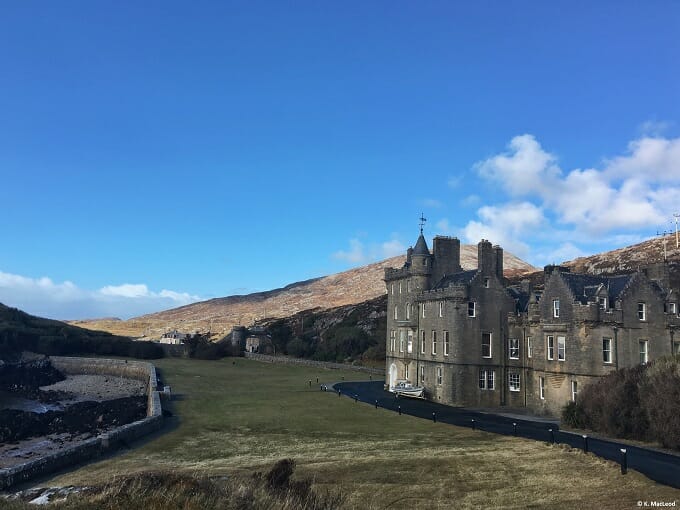 In the end, we needn’t have worried.

After tackling a few more bends in the road and hair-raising blind summits, we rounded a corner and there it was: a strip of sparkling white sand hemmed in by small rocky, heathery hills, and fringed by just three isolated houses.

I felt a twinge of jealousy directed towards the owners of these three houses by the beach; their gardens weren’t even marked, just open onto the sandy machair. Imagine waking up to that every morning, I thought (a thought that was quickly followed by the realisation it would mean tackling that road every day). 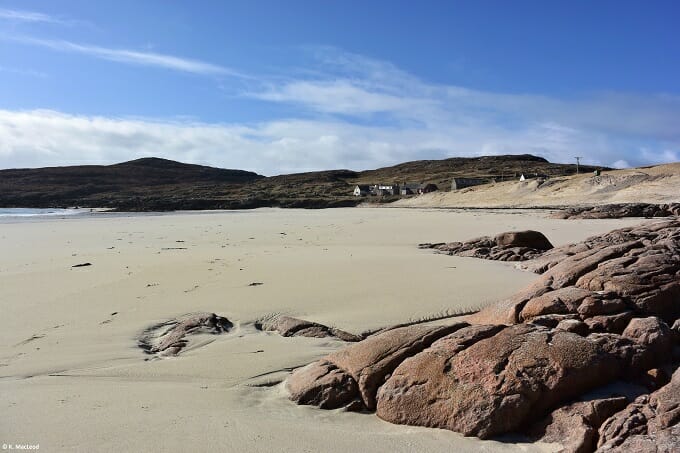 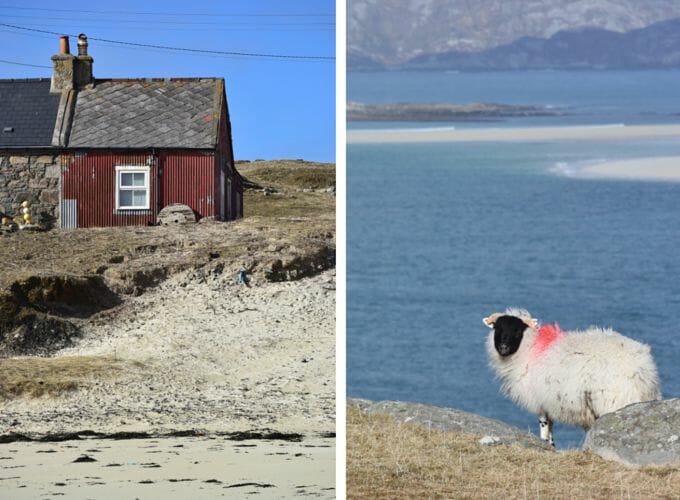 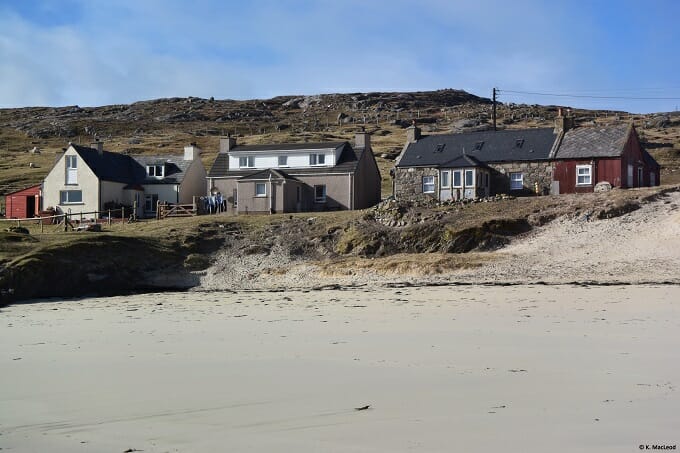 The sand on the beach was untouched, save for the footprints of some small bird and the work of the waves.

Out across the water, seemingly far away, sat Luskentyre, Taransay, and the headlands of south Harris.  Behind us was machair, and over the hill, more breathtaking rural beauty.

Once we caught our breath from the short climb (and regained our balance from jumping over boggy patches of moss), we simply stood and stared at the panorama of the Harris hills giving way to the hills of Uig in Lewis.

In the foreground sat the tiny uninhabited island of Scarp, where the ill-fated rocket post between Scarp and Harris was attempted in 1934; we could just make out the handful of homes that still stand on the rocky ground.

I stood amazed, both at the scenery and the fact that it had taken me almost thirty years to make my way to this corner of the island.  Yes, the road to Huisinis is an unusual one: but tackling the winding road is worth it for the enchanting place of wild beauty waiting at its end. 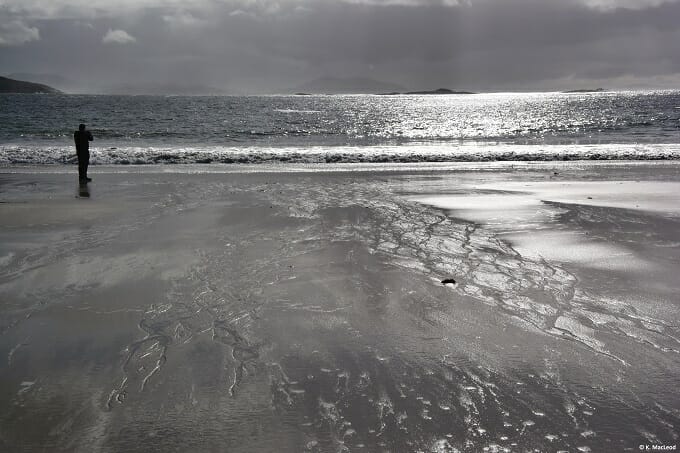 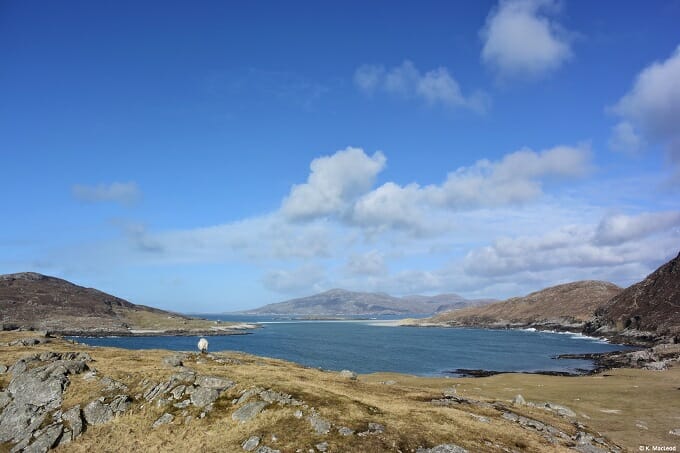 Have you ever postponed visiting somewhere because it was difficult to get to, like Huisinis? What was it like when you finally made it?

If you enjoyed this story, you’ll find more travel tales from the islands in my Outer Hebrides Travel Guide.