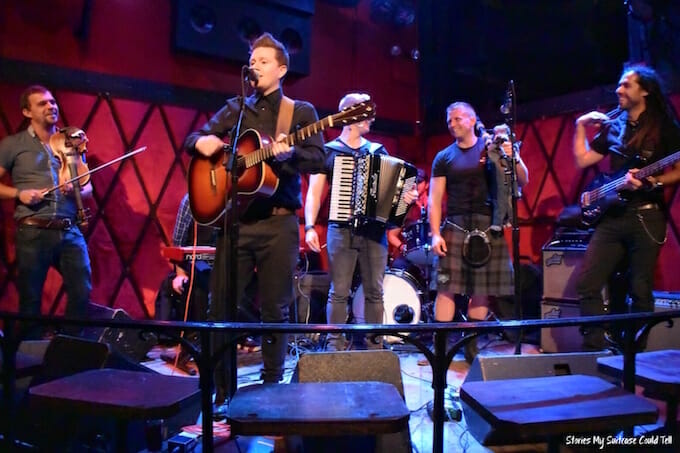 The first time I saw Scottish band Skerryvore play, I was in McNeill’s pub in Stornoway.

It was the summer of 2008, and one of those nights that becomes a bit of a local legend: ceilidhing between the bar and the door, dancing on seats, all other plans for the night forgotten. I spent the rest of the summer with their debut album on repeat in my car.

If someone had said to me then, that eight years later I would be living in the USA and watching them play in an equally intimate location in New York City, I’d have laughed in their face.  Yet that’s exactly where I found myself last month, in front of the compact stage at Rockwood Music Hall in the Lower East Side, which has played host to the likes of Billy Joe Armstrong of Green Day, Mumford and Sons, and even Lady Gaga in her early days.

A lot has changed since that summer.

For Skerryvore, that has meant gaining two new members, a string of awards, releasing multiple albums, and touring the USA and Europe countless times.  This was their first real gig in NYC, the penultimate date on a tour calendar that saw them cover 12 cities across seven states, from California and Wisconsin to Vermont and New Hampshire.  It was a gig I’d been waiting for months, since it was first announced early on in the summer by Siouxie of Whisky and Tartan.

I’ve always had a soft spot for trad music: play me a reel with fiddles and accordions and you might actually see me get onto the dance floor. Now that I live in the USA, my appreciation of Scottish music has only grown. There’s something in the words, an edge to the sound, that both brings on the cianalas and soothes its presence.

And here we were at Rockwood Music Hall, an audience of New Yorkers with a few Scots thrown in for good measure (Don’t I always talk about what a small world it is? I met film producer Carol, who was recently working in Harris, and another music fan who had an iPhone cover that featured Luskentyre beach).

At Rockwood Music Hall, bands move on and off the stage quickly.

Skerryvore took over from a jazz band on the small corner stage; later they would be replaced by a band with eccentric attire and an assortment of odd instruments. ‘Cramped’ is how the New York Times describe it, but I think I prefer ‘cosy.’ 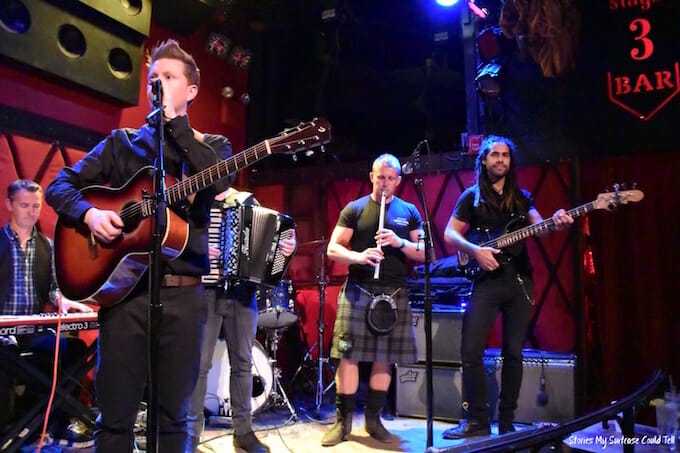 The folk rock band launched into their first number, Walk With Me, with enthusiasm, flute notes and lead-singer Alec’s voice taking on a Southern country music edge. One of my favourites from that long-ago summer came next, the high-speed instrumental Ginger Grouse Jigs, which saw the New Yorkers in the audience show off the kind of dance moves you would be unlikely to see at a ceilidh in the Outer Hebrides.

There was an excellent Runrig cover, and some more instrumental foot-tapping numbers that had me hopping up and down with excitement (it’s the melodeon player in me – you never forget a tune!) before the slow start to The Angry Fiddler. It was momentarily slow, almost mournful, but it soon launched into a full-speed set of tunes, the name of which comes from the band’s nickname for fiddler Craig Espie. (He told us later it was because people tend to think he looks angry, even when he’s perfectly happy.)

All of a sudden, after the finale of Put Your Hands Up, it was over.

Over too soon, I thought, but this is New York, where things move fast. It was interesting to hear the band talk in the bar afterwards about the contrast in atmosphere at performances in different countries, and how American gigs tend to be slightly shorter than their Scottish counterparts.

I’ll admit that instruments like the fiddle or the bagpipes can grate on the senses when played poorly. But play them well, and something akin to magic fills in the air, causing infectious foot-tapping and clapping in anyone who hears it – and that’s exactly what happened when Skerryvore were on stage at Rockwood Music Hall on September 22nd.

Being an expat abroad, I’d always thought familiar food from home was the ultimate form of comfort. As the Skerryvore show showed, music does the job just as well, if not better; there’s something about the power of music that stirs the soul. Let’s just hope it’s not another eight years before I hear those foot-stomping tunes again! 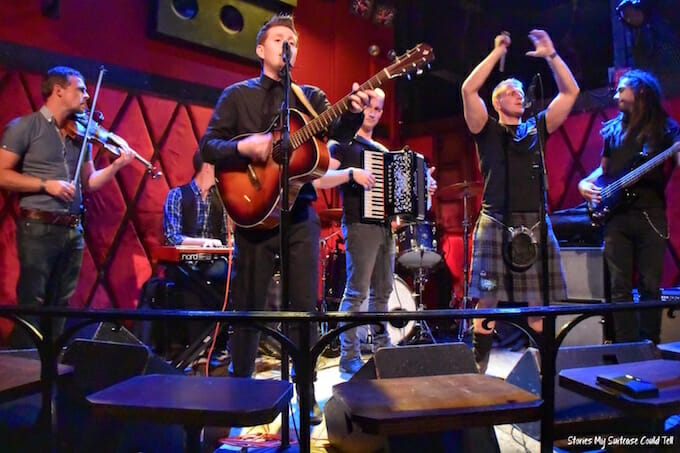 What do you think of Scottish music? Which styles of music, or songs, bring back memories for you?

« A Mini Travel Guide to Stornoway
Autumn in New York: My Expat Observations »