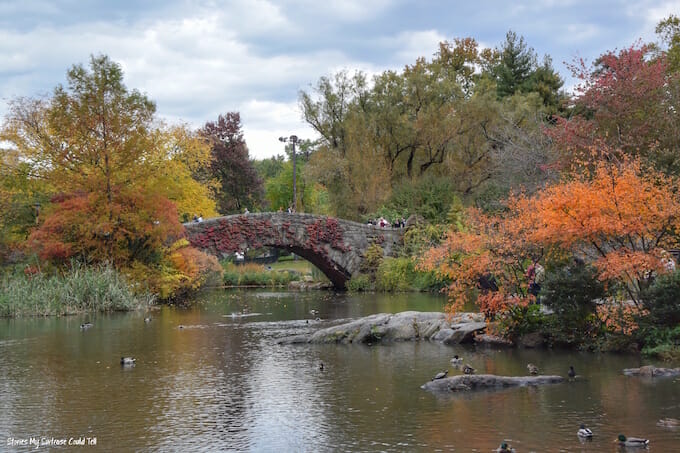 As an expat, I’m never quite sure whether to call this glorious new season ‘autumn’ or ‘fall’ – usually, my words change depending on who I’m speaking to.

It’s a language conundrum I come across quite frequently as a British expat in America, where our two versions of English can cause some confusion. But whatever you want to call it, I think I can honestly say that autumn is my favourite season.

When I lived in the Outer Hebrides, it was the season where perfect timing and slightly shorter days meant that every morning at breakfast time, the sun rose over the mainland mountains, filling the kitchen with a firey light from across the Minch, the body of water that separates the islands from mainland Scotland.

When I lived in St Andrews, it was the season where my friends and I were finally settled into the routine of a new academic year, the one where we met for coffees to warm up – and catch up – in between lectures and seminars. When I lived in China, it was a season of discovery: once we were finally able to use chopsticks and find our way around a foreign city, our adventures really began. 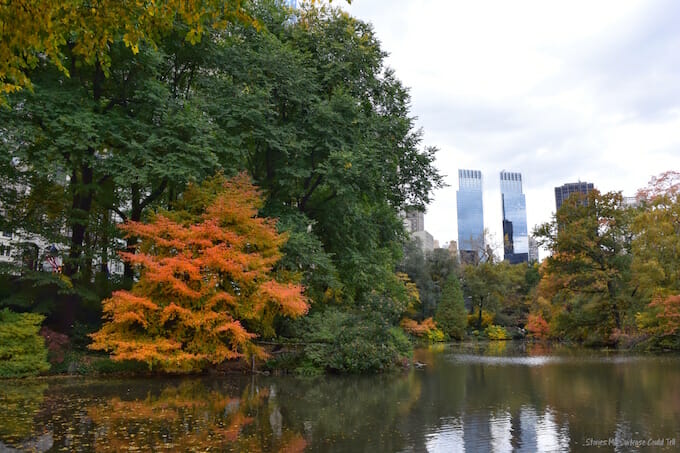 Autumn in New York is a season of colour, something I never really associated autumn with anywhere else. Maybe in the rest of the UK the leaves burn brightly, but my experience in Scotland has always been one where the minute the leaves turn a crunchy golden brown, a gale arrives to blow them all away, leaving the trees bare and catapulting us straight into an early winter.

Not here. Here, in the north east of the USA, the leaves slowly turn every shade of bronze, gold, and ruby red you can imagine. As the weeks go on, the fallen leaves are swept up into piles on the sidewalk just waiting to be jumped in. When the sun is out and the air is crisp, it really does feel a little bit magical.

It seems to me that Americans like any excuse to celebrate, and this new season is no exception. Fall is embraced with a fervour I’ve never seen anywhere else – and for once, my natural British inclination to not cause a fuss is swept away. Fall fever is a little bit infectious here, and I enjoy seeing the different ways people take it to heart.

Almost as soon as October arrives, pumpkins and gourds adorn every stoop, shelf, and window sill. 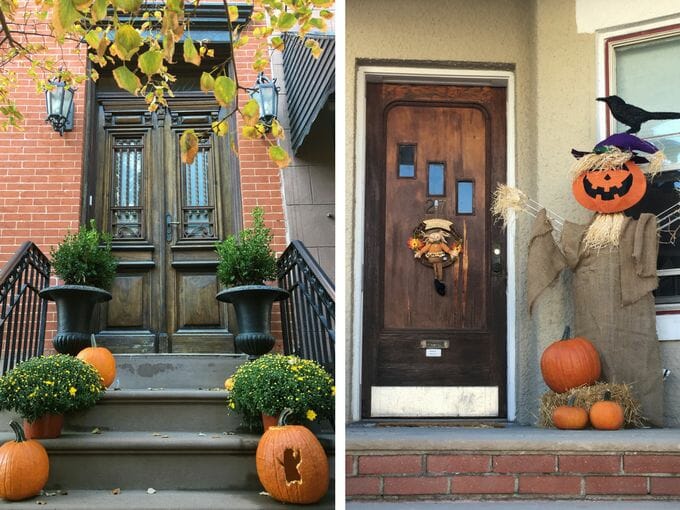 It’s quite cheering, really, to walk through crisp autumn air and see bright orange pumpkins of all shapes and sizes decorating what appears to be every available space. Some people simply place their pumpkins in doorways, and others get a little more creative, carving ghoulish and ghostly designs into the giant fruits. I’ll admit I even bought a mini one to decorate my writing desk with earlier in the month.

Seasonal wreaths begin to pop up everywhere, too, adorning doorways for a few weeks before they get replaced with more festive ones in the run-up to Christmas. I’d say it would be nice to do this in the Hebrides, but I doubt they would stay on doorways for long once the gales arrived!

As if actual pumpkins weren’t enough, pumpkin flavour, or to be more precise, pumpkin spice flavour, infuses everything – and I mean everything. 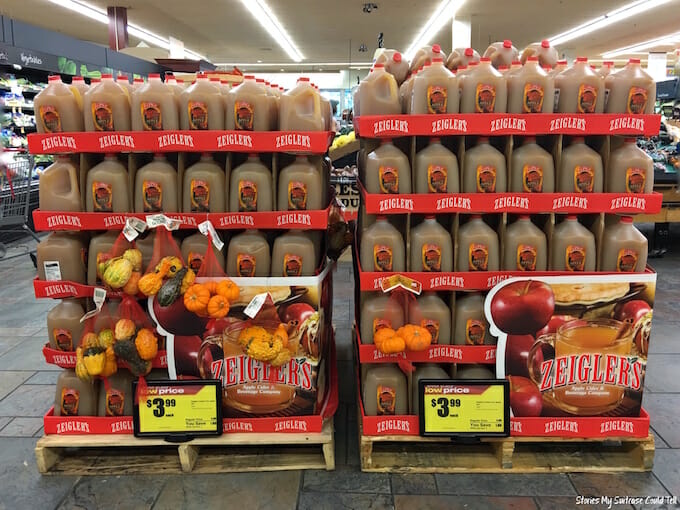 Cakes, cookies, breads, beers… you name it, it will have pumpkin added in there somewhere.  This is one tradition I could quite happily do without: I don’t like the flavour!  Apple cider is another culinary staple of the season, and another one I can’t quite get my ahead around.

Not to be confused with its alcoholic British cousin (here, that’s called ‘hard cider’), apple cider is a bit like a thick apple juice flavoured with cinnamon.  The darkly-coloured, freshly squeezed apple juice is something I can’t get enough off – and don’t even get me started on the warm apple pies!

People also go all-out for Halloween, long before it even begins. 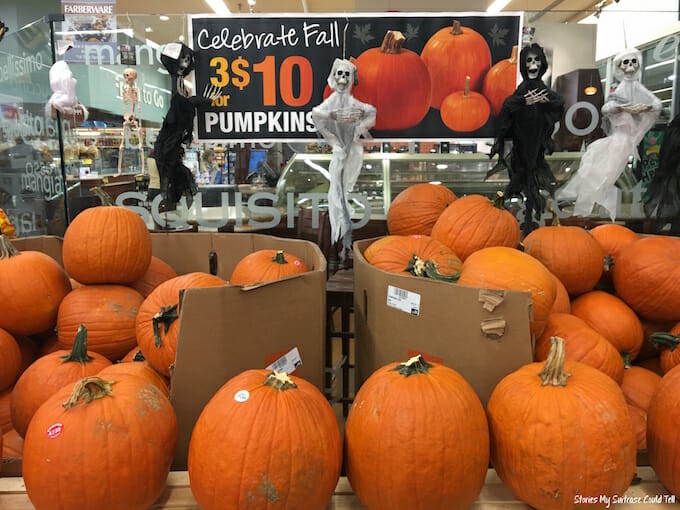 In the past few weeks I’ve seen cobwebs clinging onto trees; a giant blow-up cat with a battery powered head, sitting on a roof, moving to watch passers-by; ghosts on display in gardens; and skeletons lingering by fence posts.  I’m sure the children in the area are delighted with the creepy additions to the neighbourhood, and it’s lovely to see the effort people go to for them.

Halloween is also as much a celebration for adults as it is for children, which surprised me. Bars and restaurants have themed nights and ticketed events on Halloween. Heck, even pets celebrate the pagan holiday – there’s an annual Dog Halloween parade held in Thomson Square every October!

Another new discovery for me was learning that apple picking, corn mazes, and hay rides are all the rage in autumn. 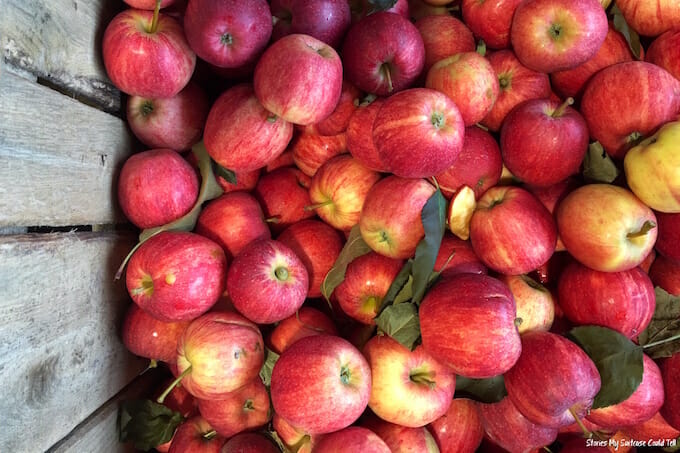 Maybe to make up for the harshness of the coming winter, in autumn everyone (or so it seems) makes the most of the outdoors, and spends a weekend or two in the countryside.

Apple picking is a popular option (photos of it take over Instagram and Facebook feeds) and haunted hay rides and corn mazes are often set up alongside the orchards. Being a bit of a scaredy-cat (I refuse point-blank to watch horror films), I haven’t joined a haunted hay ride yet, but apple picking was one activity I really wanted to try.

To introduce me to what seems to be an all-American autumn activity, my husband drove us north along the Hudson River into New York State one weekend, to Lawrence Farm Orchards near Newburgh. The sun was shining, the skies were blue, and families were roaming the orchards for their favourite variety of apple (and broccoli, cabbage, kale, and tomatoes, too). 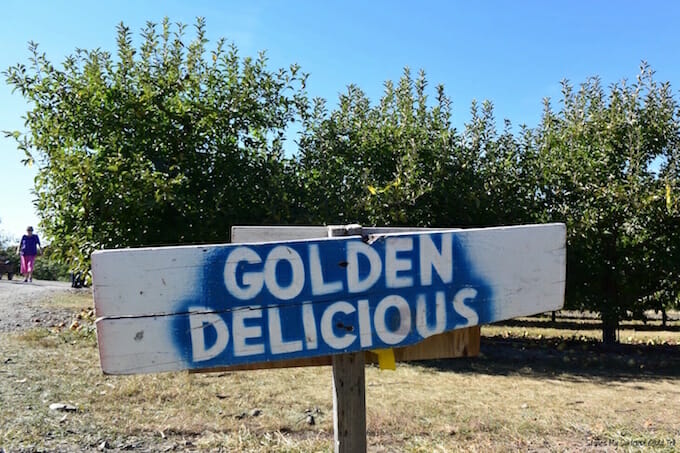 I was in my element surrounded by greenery and autumn leaves, and thoroughly enjoyed my first experience of eating an apple fresh off the bough – even though most of them were too high up for me to reach!

While all these autumnal additions are fun – especially to someone like me to whom they’re all new and intriguing – all you really need to make the season magical here are the leaves.

When you live in a space where greenery is limited, watching nature take its course is a delight. 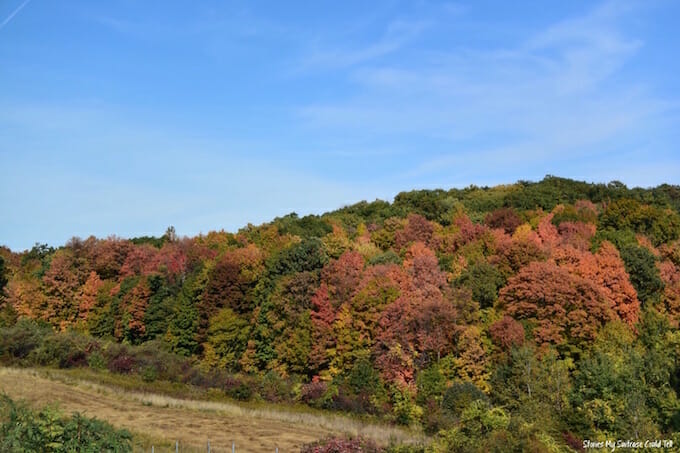 Every day the leaves seem to change another shade, even if only slightly, and there’s something immensely satisfying about crunching a freshly-fallen leaf underfoot.

Albert Camus was right, I think, when he wrote that “Autumn is a second spring where every leaf is a flower.”  Autumn in New York is a season full of colour and warmth and enthusiasm, and whatever you want to call it – autumn, or fall – it might just be my favourite season of them all. 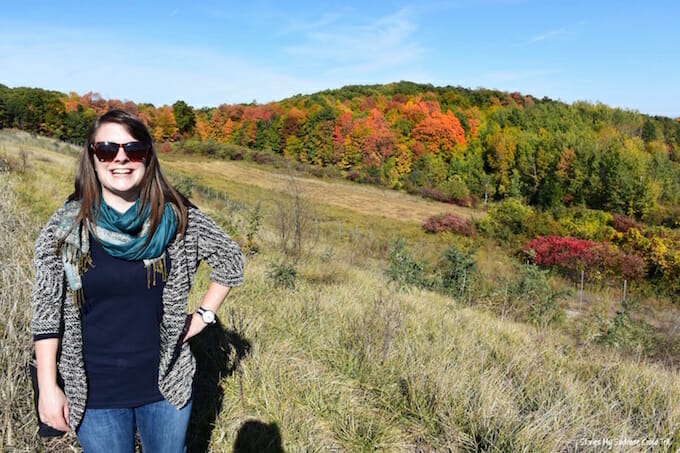 Have you ever experienced autumn in New York, or would you like to? What is autumn like where you live?

How To Make Friends As An Expat

My Translation Troubles as a British Expat

Looking Back on Two Years in New York City

« Skerryvore in NYC: A Lesson in the Power of Music
What It’s Really Like to Watch the US Election as an Expat »