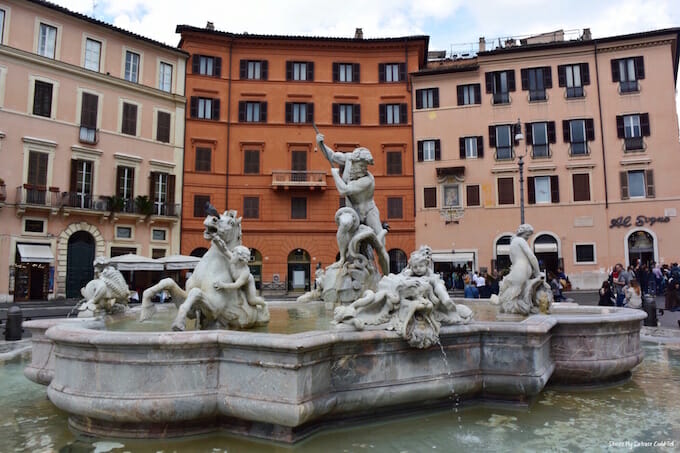 Rome is a city that exudes power.

The height of the mighty Roman Empire may be long gone, but its imprint is still seen around every corner, on every street, in every elaborate piazza.

There’s something lingering in the city’s character that lets you know it once ruled the world, something in the air that tells you this is a city comfortable with its dual personality, one both ancient and modern. It’s a mix that left me spellbound.

Rome is also a city that encourages extremes – in food, in drink, in world-famous art – and so, on a three-day solo trip to the Eternal City, I played by the mantra “When in Rome.”

Every day I walked for miles in the weak autumn sun, determined not to miss a moment. The heart of the Italian capital, I discovered, is easily walkable, and so walk I did, delighting at the surprises that Rome’s streets offered up to me.

The city’s buildings are all shades of yellow, orange, pink, and peach – and looked extra charming at golden hour. Majestic sculptures dominated the tiniest of squares. Cars – little fiats and speedy Vespas – were found on the narrowest streets, careering around corners and forcing pedestrians to flatten themselves against old stone walls. People moved slowly, leisurely: whether shopping or eating, la dolce vita was evident everywhere, and I loved it. 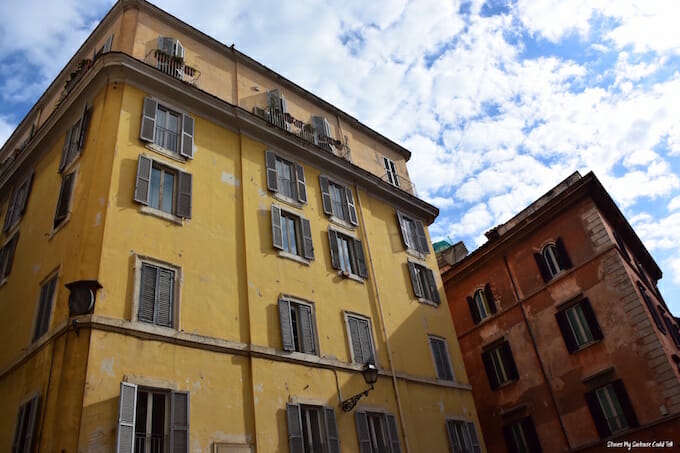 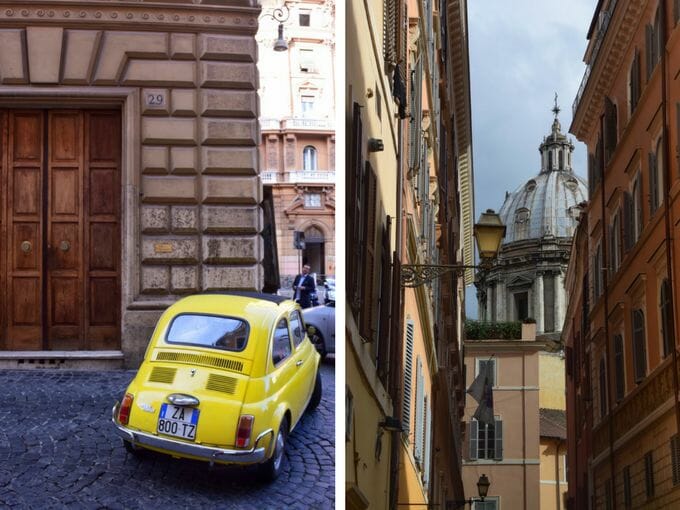 At the famed Spanish Steps, I rose early to watch the city slowly come to life from above, where the 18th century baroque staircase meets the Triniti dei Monti Church.

Domes popped up above the rooftops, and tourists and locals alike paused on the white stone – smoking a cigarette, checking their phones, resting a moment – before rising to continue with their day.

In the Centro Storico, I stopped to enjoy some bruschetta and a cappuccino in the shadow of an old church. I watched locals relax in the wide Piazza Navona, surrounded by ornate fountains and mansions.  A few streets on, I turned a corner and, to my delight, spotted the Pantheon hiding at the end of a shadowed alleyway. To see the 2000-year-old temple, with its striking pillars and dome, sitting in the centre of a bustling square, was quite a scene.

Nearby, I joined the throngs of hundreds of tourists to gaze in wonder at the Trevi Fountain, the famous baroque fountain and the largest in Rome. Recently refurbished, the fountain depicts Neptune’s chariot being led by Tritons with seahorses, crystal blue water from the aqueduct below bubbling out around them. Of course, I threw a coin into the blue waters to guarantee my future return to the city. 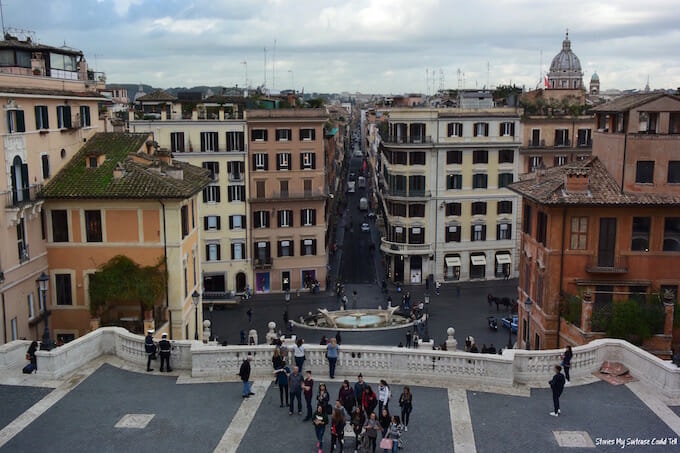 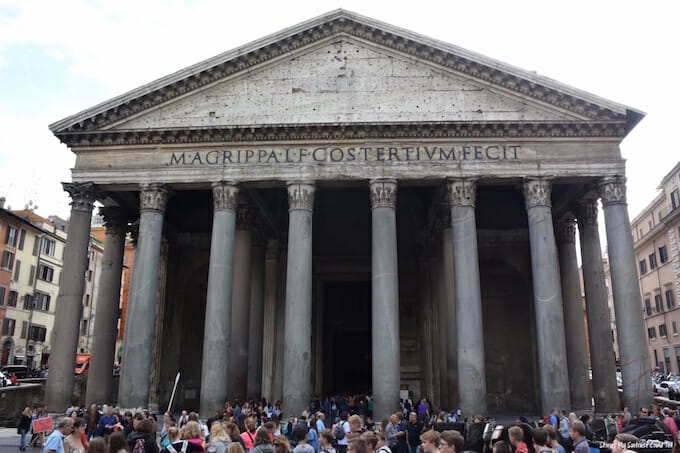 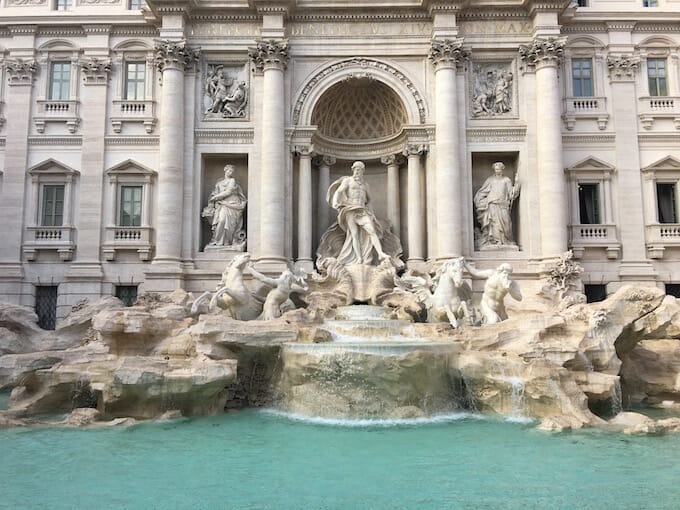 Closer to the Tiber, I wandered through the market stalls and narrow streets near the Campo de’ Fiori.

Artichokes shared tables with stove-top espresso makers at the daily market. Old friends sat at plastic tables in a square, while children played hide-and-seek on the steps of a church, Chiesa di Santa Barbara dei Librai. I joined the locals at Roscioli Caffe and Pasticceria in sipping my coffee quickly while standing at the counter, orders shouted in rapid-fire Italian ringing in my ears.

Across the river, I was charmed by the ivy-clad, cobblestone streets of Trastevere, one of the most picturesque – and popular – Rome neighbourhoods.  I lingered over an aperol spritz in the piazza in front of the Basilica di Santa Maria, and ducked into the basilica itself, marvelling at the geometric gold ceiling, detailed mosaics, and the sounds of worship that echoed past the pillars. In the backstreets, I wandered into a local salumeria, perusing the shelves stacked high with wheels of parmesan, bags of pasta, and lengths of meat. 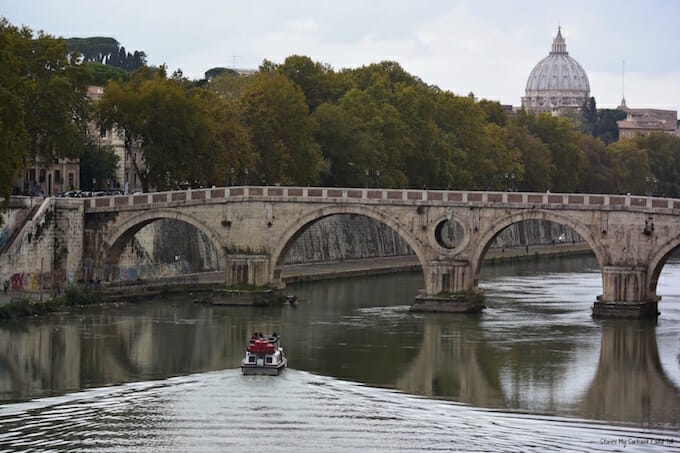 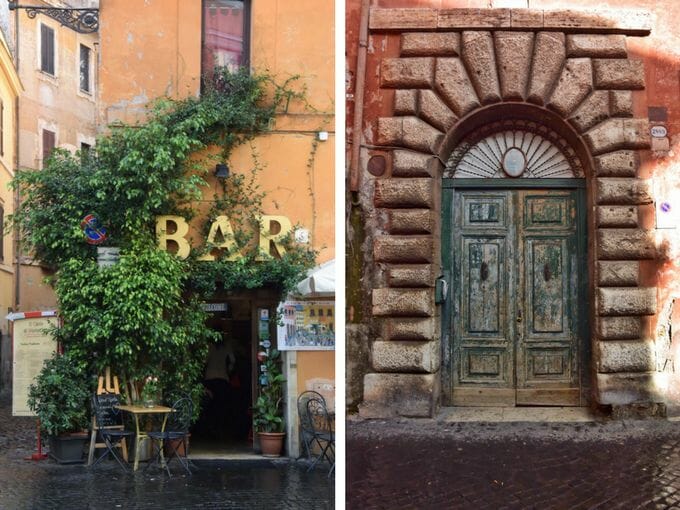 Further south, in the city’s ancient heart, I felt the weight of history at Palatine Hill, birthplace of Rome, and caught my breath at the sight of the Colosseum at sunset. On another morning, without a passport, I crossed into a different country, and the world’s smallest city state: the Vatican. On tours with The Roman Guy, I gained access to areas of these world-famous sights that would have been impossible otherwise; I gained incredible memories to cherish, too. 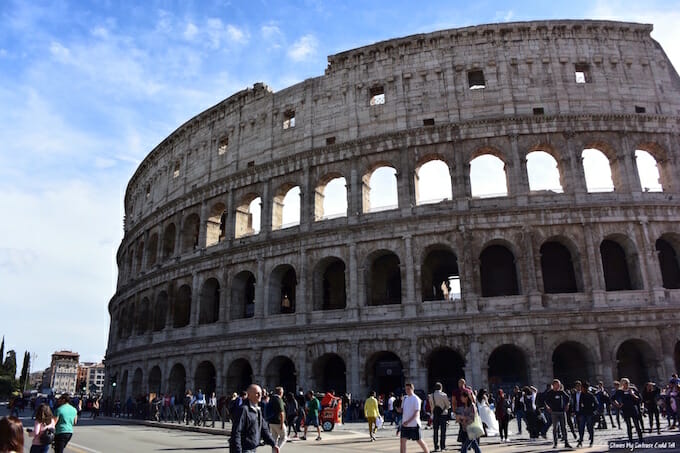 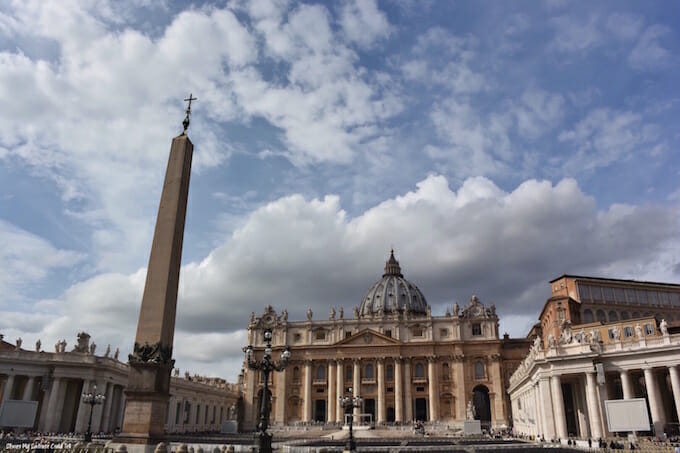 When in Rome, I ate to indulge, in part to make up for my former days as a fussy eater.  A third cup of gelato in one day? Go on then. Another glass of wine at a pavement café? Sure, fill it up. More espresso? Why not. Extra bread with my pasta? Yes, please.

I devoured thick squares of Roman pizza in the neighbourhood of Monti, traditional carbonara on the Via del Giubbonari, fried suppli and tender oxtail in Trastevere, and gelato everywhere I could find it. While I couldn’t fully join in the experience as a solo traveller, I loved that eating was a social event, with friends lingering a while over aperetivos, workers relaxed and laughing over lunch. Again, la dolce vita permeated even the little things.

Rome met all my expectations, and more.

From the ancient to the medieval to the modern, there is so much history, art, and culture to experience in the Eternal City that it could have been overwhelming. My only option was to embrace it all, whole-heartedly, and declare: “When in Rome.” 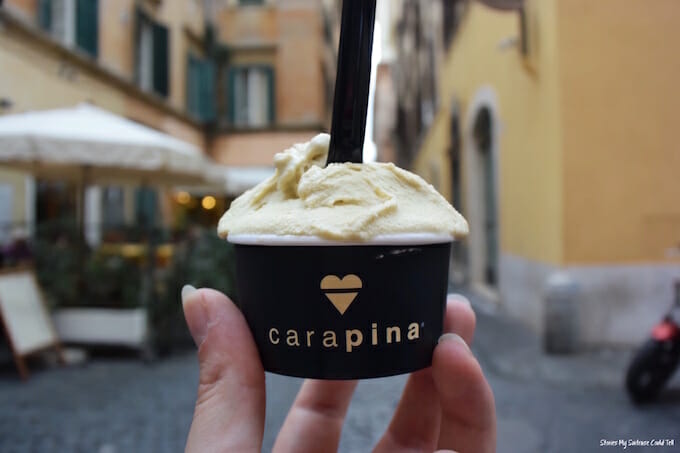 Where should I stay? Well, that’s a completely personal choice – but I chose a small hotel near the Spanish Steps, as it meant I was within walking distance from the historic centre, and also near the subway station for transport links to the Vatican and the Colosseum.

What should I do? Everything! (I tried to, at least!) Visit the charming side streets as well as the main sights. I used the Lonely Planet Rome guidebook* and Katie Parla’s e-book on Eating and Drinking in Rome* to decide what I wanted to see, and even more crucially, where I wanted to eat!

*Please note: these are affiliate links. This means I make a small commission if you buy something I love and recommend via Amazon.com (at no cost to you, of course). Find out more on the FAQ page.

Have you ever been to Rome, or would you like to visit? Let me know in the comments – I’d love to hear from you!