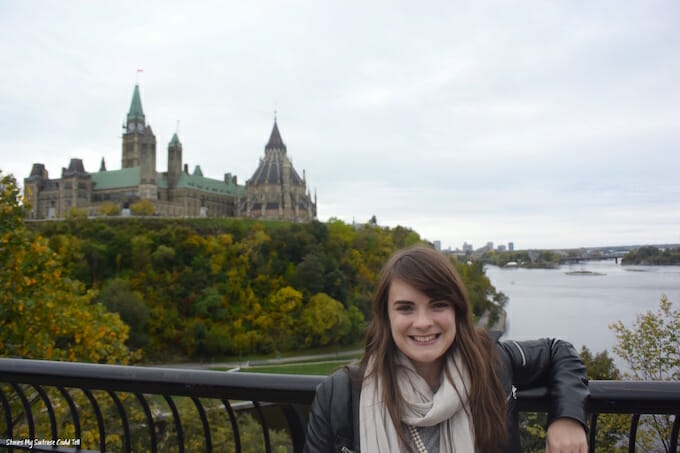 Ottawa, Canada’s capital city, had never been on my travel radar.

In fact, before my brother and I spent a long weekend there last autumn, I knew nothing about the city at all. Now, I know it’s a city I’ll be returning to, one where history, politics, and culture collide.

On one chilly afternoon, my brother and I were in Hudson Bay Company on Ottawa’s Rideau Street, hankering after the Canadian department store’s signature striped goods, when the shop assistant said something that stuck with me. “We’re a big city, but a small town,” she smiled, before wishing us well for the rest of our stay.

That single phrase seemed to sum up at least one of the reasons why I felt so content in Ottawa, even if we were only there for a few days.

Ottawa has everything you want from a big city – the high-end food and drink, the cultural events and stylish shops, the sense of importance that comes from being the seat of a country’s power – and yet it felt easy, being there. It felt comfortable.

The stereotype of friendly Canadians is a well-worn one, but I’m pleased to tell you that it’s true: I honestly can’t remember the last time I went somewhere where strangers were so welcoming.

Nearly everyone we spoke to had a connection to Scotland in one way or another: a grandparent, a friend, a year spent studying in Edinburgh. Everyone seemed genuinely curious about where my brother and I were from, and genuinely invested in how much we were enjoying time in their hometown.

But to be honest, “enjoying” ourselves was a bit of an understatement. 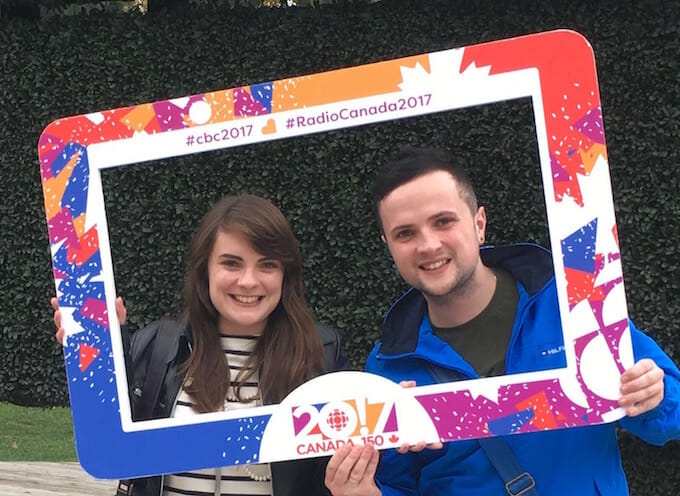 My brother and I, who spent four October days in Ottawa, haven’t stopped talking about the city since. As far as I’m concerned, Ottawa is hugely underrated. When talking about travel to Canada, people had recommended Toronto, Montreal, and Quebec City to me – but no-one had ever mentioned Ottawa, and I can’t for the life of me figure out why.

We loved a lot about Ottawa, but one of the first things we noticed was that the city has space.

The majority of the buildings are low, leaving the sky free for viewing. There are trees and flowers everywhere, not to mention water: the Rideau Canal slices through the city, and the Ottawa River looks majestic from the heights of Parliament Hill (or from the edge of an Aqua Taxi gliding through the water). With autumn in the air, the leaves in Major Hill’s Park were every shade of bronze and gold, and perfect for crunching underfoot. 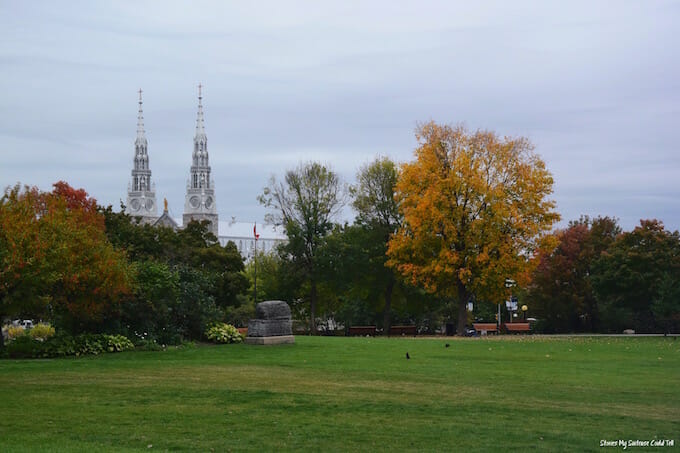 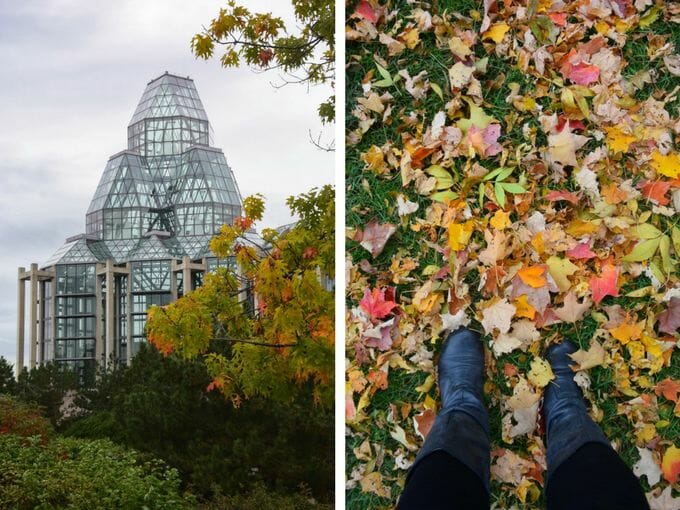 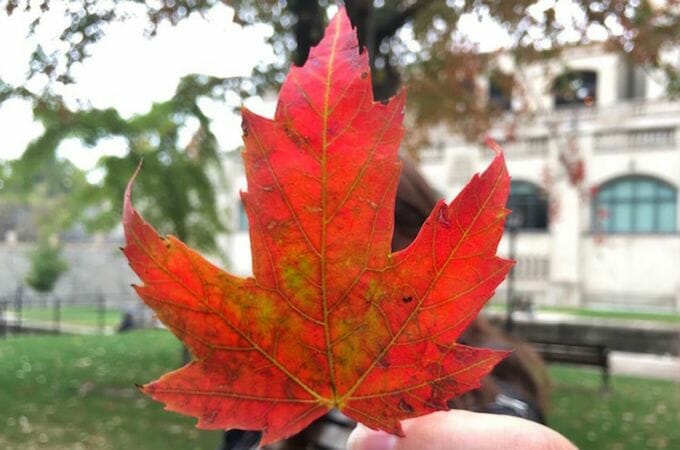 Although we didn’t get to see it, the edges of Ottawa are also home to the largest publicly-owned greenbelt in the world, a green space of farms, forests, and wetlands where urban development is strictly controlled. We could feel the effect of all that green space in the air, air that satisfyingly filled our lungs on those crisp autumn mornings.

I loved, too, that Ottawa is a city rich in history, with a past you can dive into at any point in the timeline.

We started at the beginning, at the Bytown Museum. The oldest stone building in the city stands where the construction of the Rideau Canal locks began in 1826; the small settlement of Bytown that grew up on its banks would in just thirty years become bustling the city of Ottawa.

For a political perspective, we took a tour of Parliament Hill, the seat of Canada’s government. While we were quite disappointed not to bump into Prime Minister Justin Trudeau in the corridors, our enthusiastic tour guide, Max, made the story of the parliament and its people come to life.

As we toured the House of Commons, the Senate, the various imposing foyers, and one of the most magnificent libraries I’ve ever seen, Max regaled us with amusing anecdotes as well as practical information. 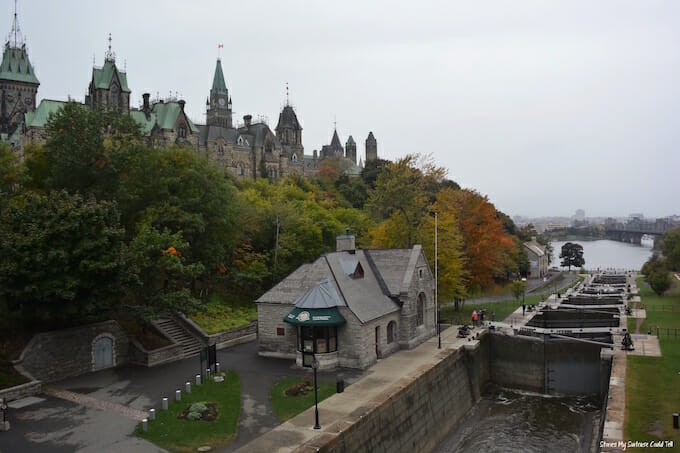 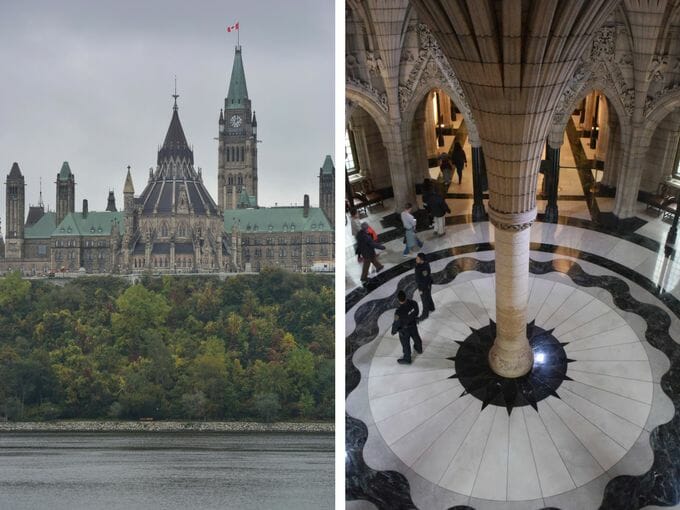 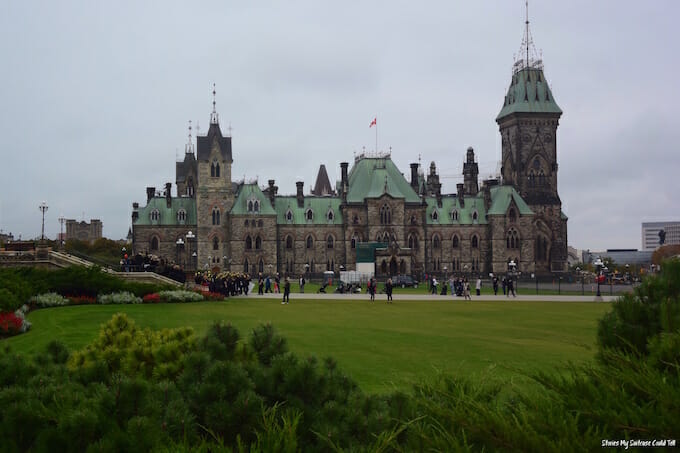 In the House of Commons – visually reminiscent of the House of Commons in London – he told us that the seats are just far enough away from each other that MP’s can’t jab at each other with swords. He pointed out a portrait of Queen Victoria, who chose Ottawa as Canada’s capital in 1875, on the wall outside the Senate, and noted it had been saved from four different fires.

Every corner and corridor held a little bit of history, from the brass plaques with the names of the hundreds of politicians who’ve served here (many of the early ones had distinctly Scottish names), to the specially commissioned sculptures that had to be carved at night to avoid any disruption to the work of government

Across the river, the Canadian Museum of History gave us a longer-term look at the country – and the city’s – past.

Canada’s most-visited museum takes you from the First Peoples and the arrival of the British and the French, through the two World Wars and the ups and downs of domestic politics, right up to the present day. The exhibitions were were incredibly in-depth, and didn’t shy away from difficult periods of Canadian history.

Nearby, the horticultural show Moasaicanada150 offered another insight into the country’s character, as part of the celebrations for Canada’s 150th birthday. The colourful show detailed the history and culture of Canada and the First Nations, with each province represented by a beautiful flower display showcasing something notable about the area. I particularly liked the lobster fisherman from Nova Scotia; the muskoxen from the Northwest Territories; and the sailing ships that represented Quebec.

Although the city centre could have kept us occupied for the entire weekend, there was more to explore in the surrounding neighbourhoods, too. 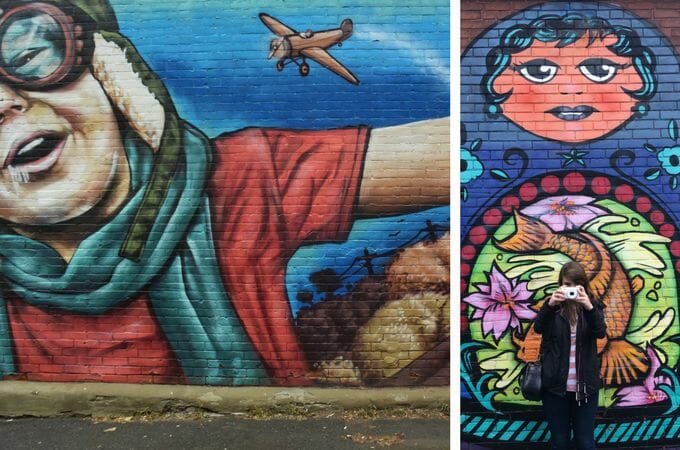 In the Glebe neighbourhood, we strolled through the Sunday farmer’s market and admired the street art murals that covered entire alleyways. In Hintonburg, we got a taste – quite literally! – of the restaurants and shops in one of the city’s latest up-and-coming areas, thanks to the C’est Bon ‘Taste of Hintonburg Tour.’

Most food tours give you nibbles here and there, but this one gives you what feels like entire meals at every stop. There was award-wining gelato at Stella Luna Gelato, fresh fish tacos at La Cocina Loca, and pour-over coffee in the hard-to-find converted garage that is Happy Goat Coffee.

Some businesses were even located in what has been called the city’s ugliest building, one that’s getting a new lease of life from its foodie occupants, like Art Is In Bakery, who have both a café and a bakery in the space, and Beyond the Pale Brewery, whose owners are self-taught brewers and began learning in their basement. Every spot on the tour had a story to tell – and something tasty to try.

Food, in fact, played a serious role in our long weekend in Ottawa.

(I think at one point we may have had five meals in one day…!)

Whether we were trying ‘Beaver Tail’ pastries and ‘Trudeau Cookies’ at the ByWard Market, or indulging in some of the city’s best restaurants, we ate a lot (and we ate well). The food scene in Canada’s capital is a burgeoning one; the likes of the Savour Ottawa initiative are also beginning to promote the city as a culinary destination, something we definitely experienced during our time there. 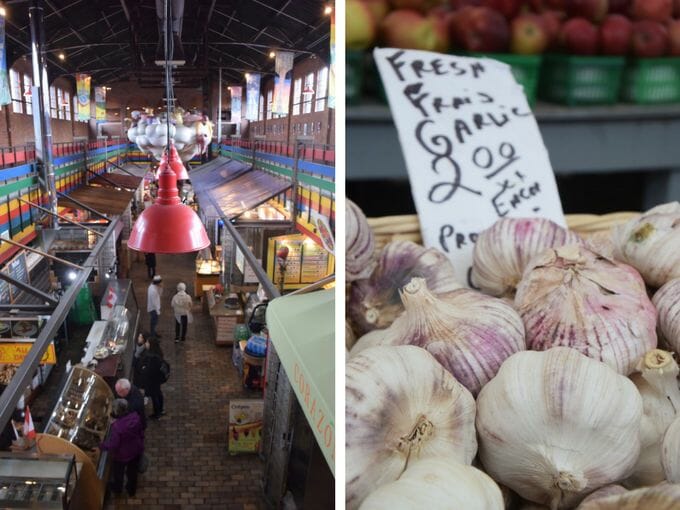 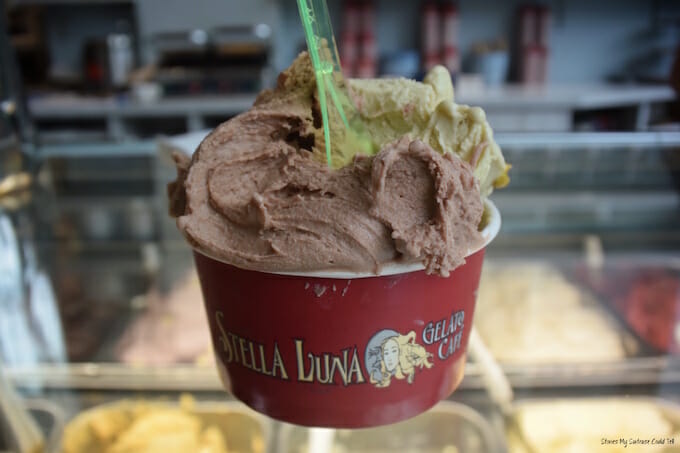 At Fairouz, a modern Middle Eastern restaurant housed in a sumptuously decorated old townhouse, we ate what both of us agreed was one of our best meals ever. The ingredients on the menu were familiar, but the resulting flavours were not; somehow Fairouz transformed what seemed like perfectly ordinary dishes into something extraordinary and unique.

Another night, at the Albion Rooms, we enjoyed the bubbly weekend atmosphere and locally-influenced food and drink (I may have accidentally eaten all the wild boar pate from the cheese board before my brother even got a look in); while at Sidedoor, hidden down an alleyway in the ByWard Market area, we opted for fresh, Chinese-style dishes and a delightful little dessert of mini doughnuts.

By the time we had to check out of our hotel at the end of the three days, we didn’t want to leave.

There were a lot of things that made our weekend in Ottawa magical: the people, the history, the parks, and of course, the food. But what made it extra special was the chance to spend quality sibling time together – something that’s in short supply when you live an ocean away from each other.

In Ottawa my brother and I laughed together, learned together, and ate (a lot) together. We were both charmed and surprised by Ottawa in equal measure – by its “big city” options and “small town” atmosphere.

Ottawa may not have been on my travel radar before, but it is now (and it should be on yours, too!). 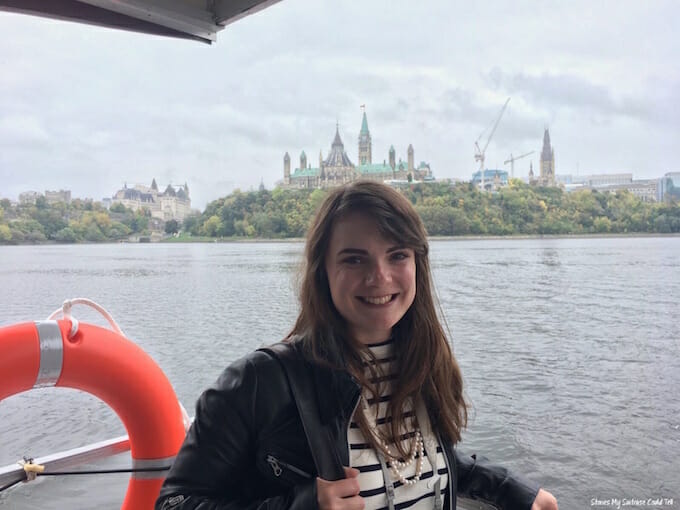 Where should I stay?  We stayed in the beautifully designed Metcalfe Hotel, located less than a five-minute walk from Parliament Hill (aka perfectly located for exploring the city centre on foot).

What’s the best way to get around?  In the city centre, all the main sights, shops, and parks are easily walkable (and for anything located on the Gatineau side of the river, I highly recommend taking the Aqua Taxi!). We used taxis to reach the Glebe and Hintonburg, which are a bit further out.

« Getting To Know Jekyll Island, One of Georgia’s Golden Isles
8 of the Best Places to Eat in Ottawa »