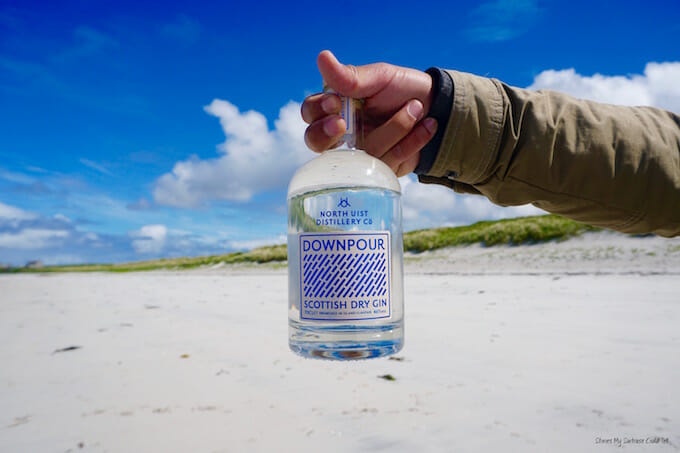 The sky was bright and light before breakfast; it was June in the Outer Hebrides, and night never stays long in the summer.

Gannets and cormorants wheeled through the air in front of the ferry, the landmass of Berneray and North Uist looming larger in the distance as we cut through the waves of the Sound of Harris. It was still early when we landed, and the only life about was the birds. Oyster catchers protecting their young and squacking in the short grass. An owl perched on a fence post. Turnstones flitting through the air.

My family and I drove south along the west coast of North Uist, passing through a landscape of machair and single track roads – roads that left the villages at right angles, leading to hidden bays of white sand, tiny harbours, and abandoned farmsteads. By the time we reached Balranald Nature Reserve we’d found the rest of the tourists, refuelling over coffee and cake at The Dunes Cabin and ready to take on the day.

But instead of tackling the nearly three-mile walk around the protected headland, I soon found myself a few minutes down the road, poking my head into barrels filled with botanicals.

I was breathing in the aromas of ingredients that would soon be distilled into the islands’ latest export: Downpour Gin. Although not yet open to the public, we’d popped into the home of North Uist Distillery to meet Jonny Ingledew, Master Distiller, and Kate Macdonald, Creative Director, to find out more about their distillery, their gin, and what comes next.

Although by this point the couple had been planning the North Uist Distillery for five years, it had only officially been open for five weeks – and they had sold 150 bottles of the new island gin on their very first day. What makes Downpour Gin different, they tell me, is the unique mix of botanicals, and the “downpour” of essential oils which cause the gin to go cloudy in the glass. In terms of flavour, there’s a light citrus edge to the gin, which comes from the lemon, orange, and grapefruit peel that sit at the top of the still.

Jonny says that “grapefruit peel is a lot fresher than the other two,” and Kate adds that “orange has the deeper warming.” Then there’s the wild Hebridean heather, which gives Downpour a note of honey. They forage for the island heather in late summer, when it’s in full bloom, and store the purple flowers in the freezer until they’re needed.

The strong spicy tasting notes – a result of the likes of juniper, cassia, and peppery cubeb berries – come in at the end of the distilling process. “We run quite far into the tails, which gives the gin depth and complexity,” Jonny explains, adding that it’s not the still, but “the way you design your recipe that’s important.” While their current still, handmade in Portugal, can produce 100 bottles per run, they first created Downpour on a “tiny still” that produced only three bottles per run, and they went through 250 distillations on it to get the recipe just right.

That’s dedication, I think to myself.

Downpour Gin is described as “island life distilled,” and since Kate and Johnny are both local to the island (they returned home after attending university and building careers on the Scottish mainland) it feels especially fitting. “We both grew up in Uist, so it’s important to us that each bottle is distilled, bottled, and labelled on the island to enable the business to have a long-term benefit for people here,” says Kate. “We have been overwhelmed by the encouragement and support we’ve been shown and Uist will be at the heart of all of our decision-making as we develop the distillery.”

When we met, Kate and Jonny had recently been judges at a business competition at the local secondary school, and were gearing up for a summer of sharing their gin at agricultural shows, art studio launches, and island carnivals. The distillery is a part of the North Uist community, but their spirit is making itself known much further afield; Downpour Gin has already won double gold at the Women’s Wine and Spirit Awards, and silver at both the San Francisco Spirits Competition and the International Wine and Spirits Competition. 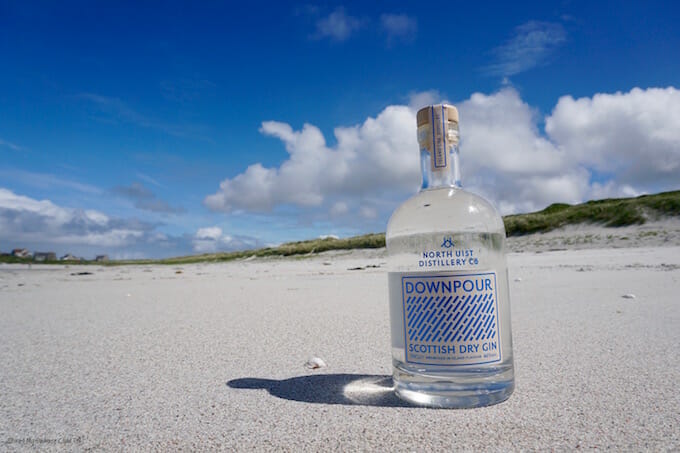 There’s whisky in the works here at North Uist Distillery, too.

Bere barely, which grows locally in North Uist, will be a key ingredient, supporting the local crofting community. In time, there’ll be a new distillery building and visitor centre, located on local common grazing land with the permission of the local crofters. It truly is a “local” endeavour, in every sense of the word.

Before we left, Kate gifted me a miniature bottle of Downpour Gin (the mini bottles had been labelled while we were visiting), and the couple peppered us with recommendations of where to get some lunch nearby. We settled on Namara Seafood Café, and feasted on scallops and chips by Kallin Harbour, from where Jonny’s father runs boat trips. In the Outer Hebrides, there’s always another connection, another thread in the story.

Back at home that night – 100 miles, another ferry journey, and three islands further north – I twisted the lid off the little bottle and poured a generous splash of Downpour Gin into a glass. The spirit clouded as it settled with the tonic, and I recognised the taste of warming spice on the tongue. It was just as they had described: island life distilled. 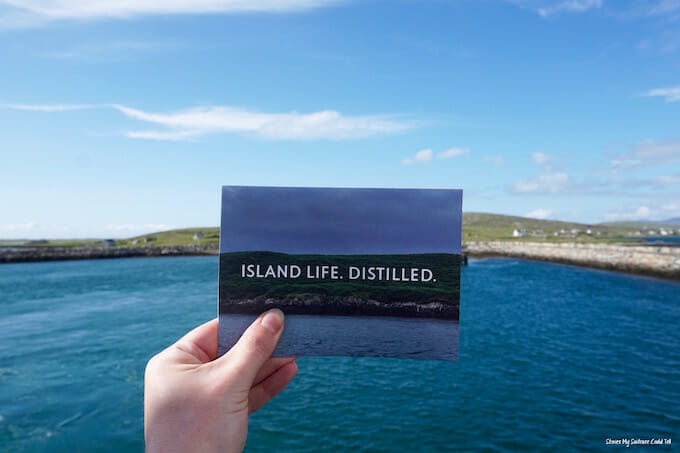 Where is the distillery?  The North Uist Distillery is (unsurprisingly!) located in North Uist. Although it’s not yet open to the public, a new distillery building and visitor centre are in the works.

Where can I buy Downpour Gin?  You can buy Downpour Gin from the online shop on the North Uist Distillery website, and they also offer a “click and collect” service for certain locations in the Outer Hebrides.

Have you tried Downpour Gin, or would you like to? Do you visit local food and drink producers when you travel? Let me know in the comments – I’d love to hear from you!

« 15 of My Favourite Places To Eat in Lewis and Harris
Stories My Suitcase Could Tell Turns 8! »