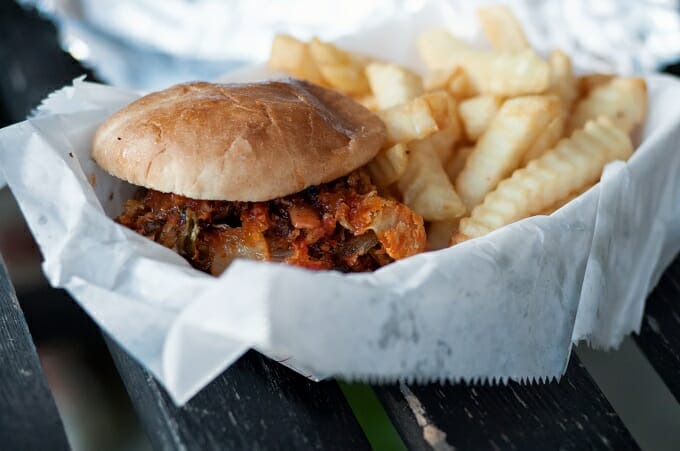 Not exactly the words a twenty-something girl wants to hear.  When I first found out I would be studying abroad in the States, everyone warned me about the food – or more precisely, the portions.  I classed the comments as exaggerations and forgot all about them: until I arrived and ordered a sandwich.

Americans know their food.  Forget French pastries and the pasta in Pisa: you can get all that and much (much) more right here.  Eating in America is such a serious business that Secretary of State Hilary Clinton even uses it as a diplomatic tool at State Department dinners.

The aforementioned sandwiches bear little resemblance to their British counterparts.  New York’s Carnegie Deli has a constant queue of customers waiting for their pastrami sandwiches, creations that are inches thick and can require a knife and fork for successful consumption.  It’s a similar story across the Hudson at Vito’s Delicatessen in Hoboken, where you can find slabs of smoked mozzarella atop slices of fresh turkey and generous squirts of honey mustard.

Loiter downtown in Little Italy and in between the fire hydrants masquerading as Italian flags you’ll find eateries aplenty. Here I scoffed several slices of the deliciously light pizza at Lombardi’s, and savoured cannelloni for the first time at Ferarra, one of the oldest gelato sellers in the city.

The borders of this immigrant holdout blur with another: Chinatown.  Wander away from the fake bags and watches of Canal Street and make for the side streets.  Fried Dumpling (Mosco St) is popular, but for pan-fried jiaozi Prosperity Dumplings (Eldridge St) is the real deal.

Get a few dozen to take away and enjoy them in the nearby park where grannies under umbrellas compete at cards and OAPs exercise in the open like they do in Shanghai.  Dim sum is a popular weekend option; for an authentic experience, head under the Manhattan Bridge and prepare to point at your lunch if your language skills aren’t up to scratch.

After jiaozi and gelato, there is what could be called the national cuisine.  American fare might appear to be nothing but burgers, burgers and more burgers – but you’ve never seen them like this before.  Five Guys is a staple in nearly every east coast city and Shake Shack is scrumptious; but what are perhaps the most perfect burgers can be found in the unlikely location of the Le Parker Meriden hotel.

When you enter at 57th street, head through the red-hued tea room and slip behind the floor-to-ceiling curtain in the foyer for a fast food feast that stands in stark contrast to the hotel that holds it.  The Burger Joint is small, dark and crowded, with vinyl booths, a hand-written set menu and a cash-only till.  Patties are cooked on request, from a dripping medium-rare to a roasted well done, and your side of fries is served in a brown paper bag that sports spots of grease.  You’ll be hard pressed to find a better burger.

Pizza, pastrami, dumplings, donuts – it’s impossible to cover every favourite food find in New York (and even more impossible to eat all there is on offer), but these spots are a good place to start.

And in case you’re wondering, I didn’t get fat.