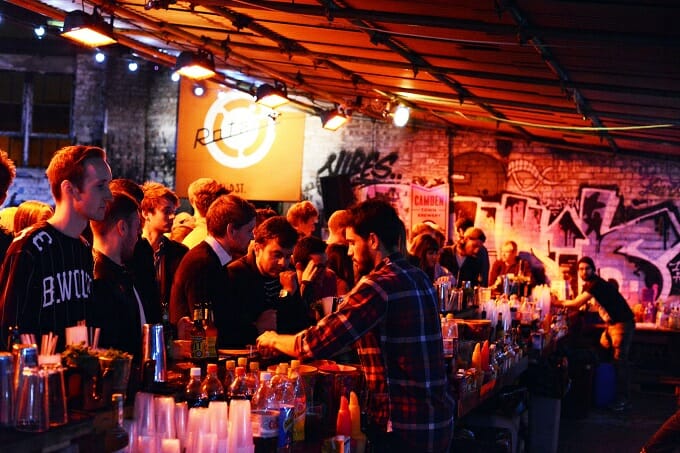 Before my visit, I knew almost nothing about Dalston in East London.  My only nugget of information took me back to my teenage years, and a song by Razorlight (a favourite band at the time) in which the lead singer urged the listener “Don’t go back to Dalston.”

Well, I would have to disagree with them on that point.  After a late night at Street Feast London at Dalston Yard, I would most definitely go back to Dalston, where the atmosphere and eats in a derelict-looking space between buildings were excellent.

Dinner in Dalston was a spur-of-the-moment decision made with friends after a lazy afternoon spent catching up by the Serpentine in Hyde Park.  A short tube and bus journey through Hackney later, we arrived on Hartwell Street and headed in the direction indicated by a chalk board advertising “street food and booze.”  We were off to a good start.

Open from 5pm until midnight, the Street Feast features a rotating line up of 17 London food trucks and traders, as well as four bars featuring everything from speciality to gin to summery frozen margaritas.  We arrived late in the evening – there’s a £3 entry fee after 7pm – to find that the night was already in full swing.

Time Out says that “this is a food market that knows how to party.”  Brick walls covered in graffiti were visible behind the shipping containers that lined the edge of the yard, and with groups of friends clustered around fire pits, and fairy lights hanging overhead, it felt exactly like a party – a particularly fashionable one. 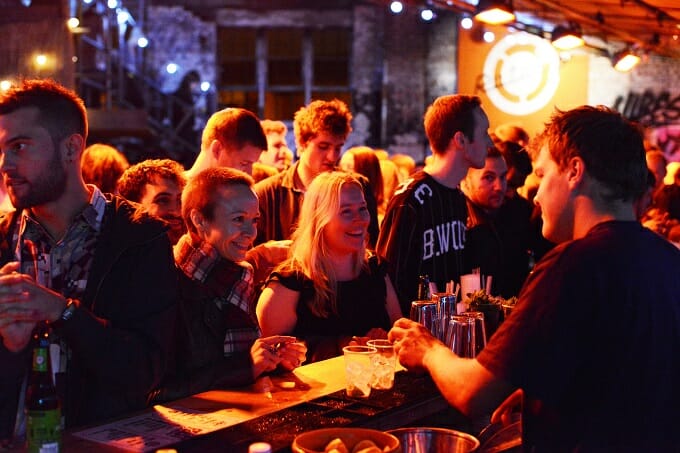 First up on the menu for us was Yum Bun; given we all met while working together in China, it was a fitting food choice. The steamed buns were beautifully light and fluffy.  Inside was melt-in-the-mouth, slow roasted, Blythburgh belly pork, accompanied by spring onion, cucumber, and hoisin sauce.  They were so delicious, we could easily have been back in Beijing.

Next stop, Mexico – or at least some Mexican tacos from Breddos Tacos.  Chipotle beef short rib, radish, sour cream, and salsa, packed inside a soft taco: perfect.  I wasn’t feeling quite adventurous enough for the habanero (read: HOT) sauce that the street food chefs offered alongside our mini Mexican meal.

Our third course came courtesy of Rola Wala, which serves twisted Indian street food.  “Inspired by the street foods of India, perfectly spiced fillings come layered on freshly baked naan with banging salads, sharp chutneys, pickles, lemon juice and crunch.”  The twisted street food was popular: by the time we reached the front of the queue, the quirky sounding beetroot, coconut, and paneer daal filling was finished, so we opted for the barbecue coriander chicken instead (it didn’t disappoint).

The atmosphere at Dalston Yard was relaxed, but with the edge of a weekend party-vibe. Harper’s Bazaar’s description of it as a “vibrant nomadic street food circus” feels particularly fitting.  I loved that we could each grab our own choice of food, find a few seats together amongst the hipster crowd, and continue the catch up that began earlier in the day.

Without a doubt, I would definitely go back to Dalston Yard’s Street Feast.  Good friends and good food: what more could you ask for on a Saturday night? 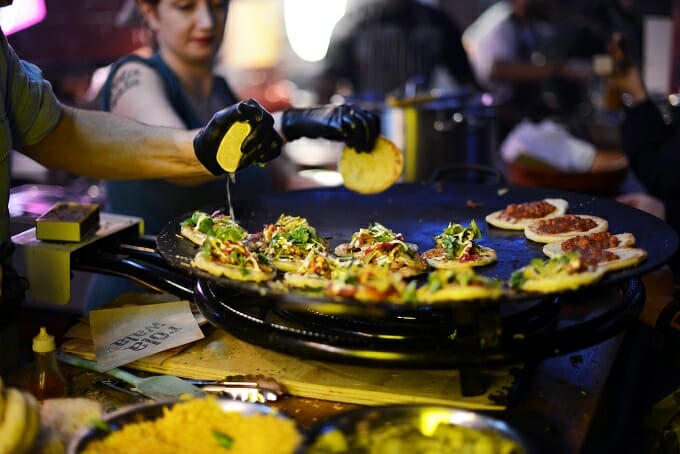 You can eat at Street Feast London at Dalston Yard every Friday and Saturday, 5pm – midnight, until 27th September.