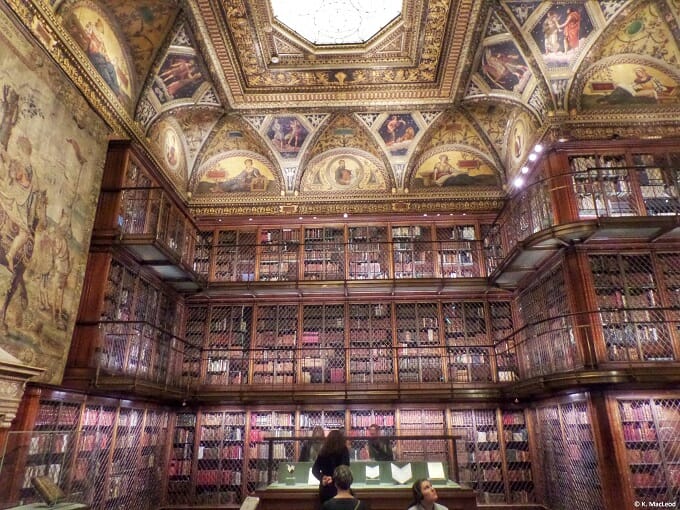 J.P. Morgan.  To most people, the name belongs solely to an investment bank, one of those financial institutions frequently in the pages of the press.  But to in-the-know New Yorkers and savvy city visitors, it means something quite different: a hidden cultural gem in the middle of Manhattan.

The Morgan Library and Museum, which sits on the corner of 36th and Madison Avenue, is every book lover’s dream.  It began in the 1890s as the private collection of Pierpont Morgan, who was not only the country’s most influential financier, but also a voracious collector of art in all its forms, from manuscripts and drawings to rare books and ancient artefacts.  The collection became public in 1924, thanks to Morgan’s son, J.P. Morgan Jr., and has been open for viewing ever since.

Even from the outside the Morgan gives off an air of mystery, a European palazzo-style structure married to a modern entrance of glass and steel.  Inside, the lobby is open and airy, with a four-storey glass courtyard that when I visited featured an art installation of brightly coloured panes of glass.

What I had really come for, though, was the library, designed by Charles McKim at the request of Morgan in 1906.  You enter through an opulent rotunda, all marble columns and frescoed ceilings, flanked by doorways to the West Room, Morgan’s red Renaissance-style private study, and the East Room, which for years was known simply as Morgan’s Library. 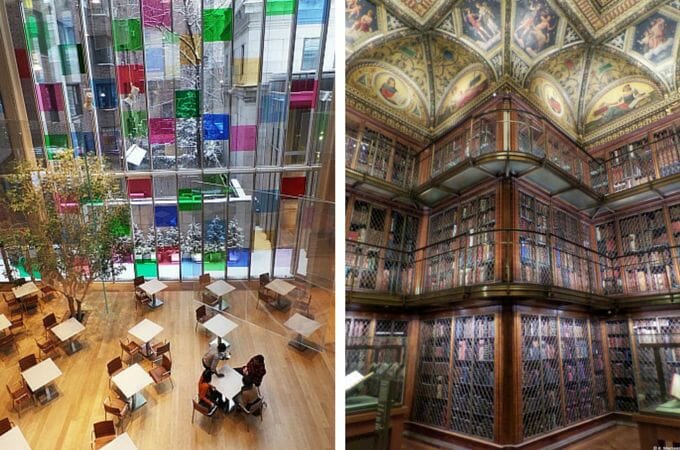 I can’t be the only bookworm in the world who at one point has dreamed of owning a bookcase that doubles up as a secret doorway (I blame Enid Blyton and the Famous Five), and the East Room of the Morgan Library has two, leading up to the second and third floor balconies.  The room is beautiful, with inlaid walnut bookshelves stocked full of rare books reaching up to the painted ceiling – bibliophile heaven if ever I saw it.

There were rare copies of Dickens and Wilde; tiny-sized children’s books; musical scores from famous composers; and even a Gutenburg Bible (the Morgan owns three copies), the first substantial book printed from movable type in the West.  For someone with even the slightest interest in the written word, the Library is fascinating, and I was in my absolute element.

Aside from the permanent displays in the Library, the Morgan has a revolving host of exhibitions throughout the building, showcasing different details of the extensive collection owned by the museum.  Having recently visited Gettysburg, it was interesting to explore the ‘Lincoln Speaks’ exhibition, which focused on the President’s passion for and mastery of language, and how his words shaped history, through displays of his letters, notes, and books he owned.

I strolled through the other exhibitions too, from one featuring modern drawings and sketches (there were a few Lichtenstein’s) to another displaying oil paintings of France, but before I ventured out into the snow again, I found myself back in the East Room of the Library.  Because which book lover could resist the lure of three floors of books?  Not this one, that’s for certain. 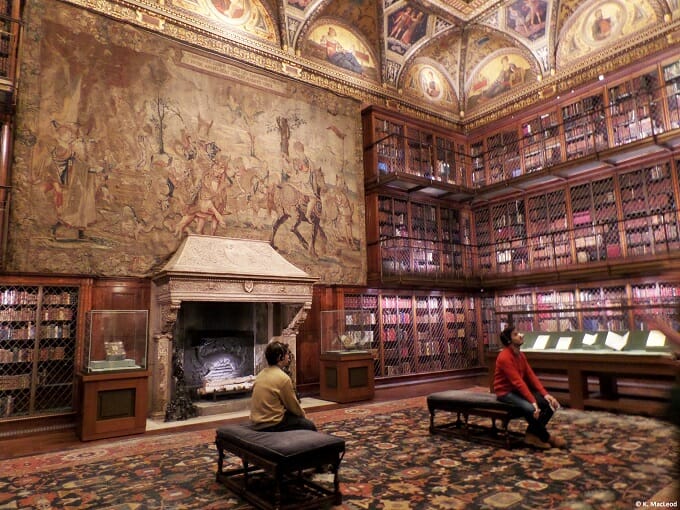 What do you think of the Morgan Library? Do you know of any other lovely libraries out there worth visiting?

« On Travel, Love, and a New Life in America
ONA Bowery: Is This The Best Camera Bag for Travellers? »