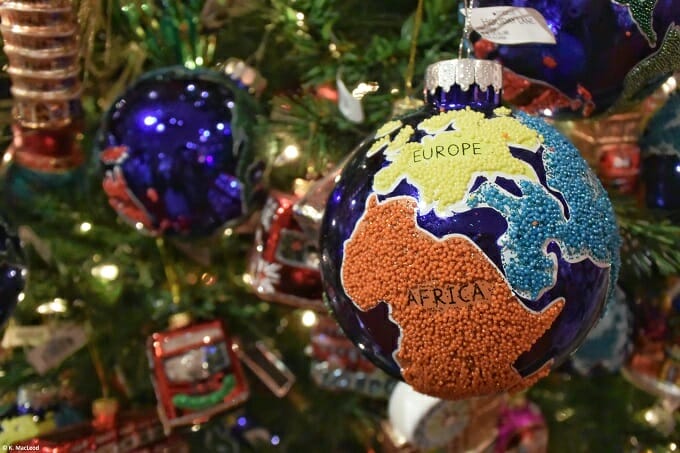 When I moved to the USA last December, the festive season was already in full swing.

Enthralled by New York’s Christmas lights and overwhelmed by transporting my life halfway across the world, I barely had time to blink before the 25th arrived. A year later, and I’ve been able to watch the excitement for the season build – not to mention notice some of the differences between the annual celebrations on either side of the pond.

First of all, there’s the name of the holiday. Here, a lot of people don’t call it Christmas: the general festive season is referred to more often than not as simply ‘The Holidays’, encompassing all the various events and religious celebrations taking place throughout November and December. I still haven’t quite got used to this, and find myself wishing a ‘Merry Christmas’ to those who then admit they don’t actually celebrate it. Oops!

The Christmas tunes that jingle from car radios and shop speakers are quite different too. While the old-school classics from Frank Sinatra, Bing Crosby and the like are still around, the hits from the 70s and 80s that are cultural touchstones in the UK are nowhere to be found.

Wizzard’s ‘I Wish It Could Be Christmas Everyday’ and Slade’s ‘Merry Christmas Everybody’ never fail to remind me of primary school Christmas parties or secondary school discos, yet they’re completely unknown on this side of the pond. My American husband was also highly dubious of the festive merits of the likes of A Fairytale of New York and Lonely This Christmas – more British Christmas classics that mark the arrival of the festive season when they first air on BBC Radio 1 or 2. 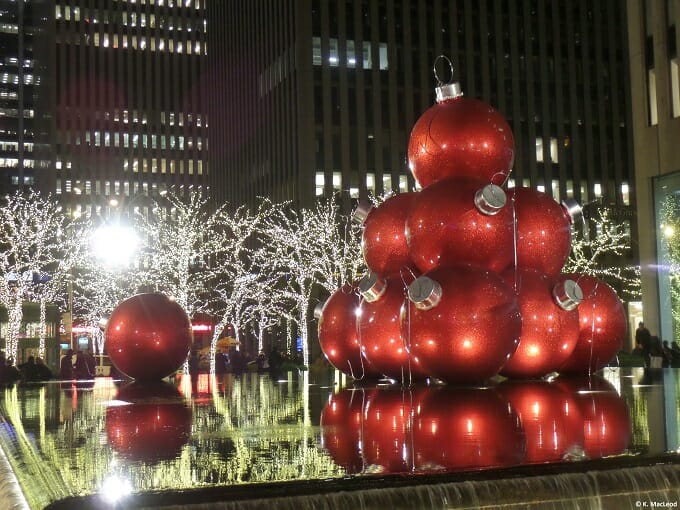 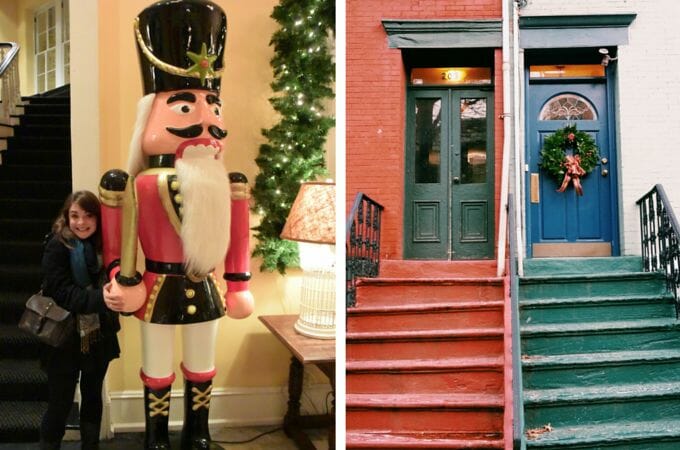 I vaguely miss the Oscar-worthy Christmas television adverts that appear in the UK at this time of year (my all-time favourite is still this one, from British department store, John Lewis).

There’s something strange too about not seeing posters for the pantomime, a classic event which I tried and failed to explain effectively to my American family and friends as an extravagant reworking of children’s fairytales with men in drag, outlandish jokes, and lots of shouting at the stage.  (It’s a lot better than it sounds, I promise!)

Then there’s the food. Aside from those of us Brits abroad who know where the best British expat shops are (in New York that’s the likes of Myers of Keswick and The Butcher’s Block) there are no bumper-sized tins of Quality Street or Roses, no Cadbury selection boxes or chocolate advent calendars. Thankfully, my family and friends in the UK know that for me Christmas would not be Christmas without the requisite chocolates, so our kitchen cupboards are now full not of food, but of excessively large quantities of Quality Street. 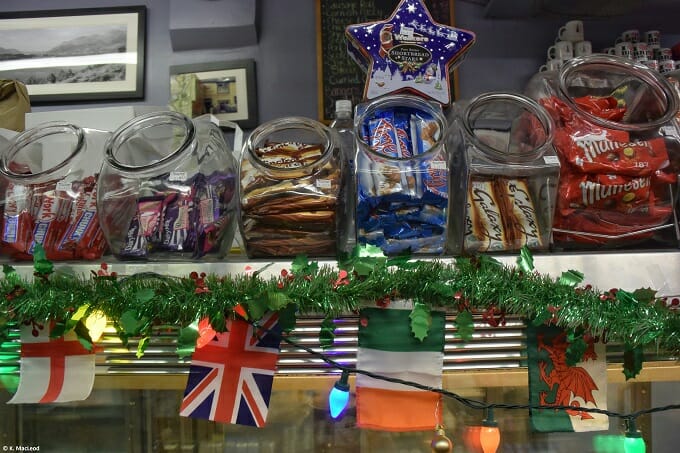 As I learned last year, there’s also the fact that families here have already eaten turkey at Thanksgiving, and so the dinner table come December 25th is more likely to be piled high with beef roasts and glazed hams than the traditional British turkey.

Christmas portions follow the same pattern as food here more generally (read: extra extra large) so our attempt at cooking a giant turkey for two last year was quite the experience! My mini chipolatas wrapped in bacon – another British staple that hasn’t made its mark in America yet – luckily turned out to be rather tasty.

Then there was the debacle with my search for a turnip. While I was successful in finding some Christmas crackers for our dinner table (Americans don’t usually have them), I failed on my mission to buy a turnip to accompany the turkey and the rest of the trimmings.

Admittedly, the ‘turnip’ I bought looked slightly strange, not at all like the ones you find in Tesco (a British supermarket, for any American readers out there), but I put it down to being in a different country. I also ignored the fact that the ‘turnip’ was called a watermelon radish; this is the country where people call trousers ‘pants’, so relating the humble turnip to a giant radish didn’t seem too far-fetched.

It wasn’t a turnip. I learned too late that on this side of the pond, what we call ‘turnips’ in Scotland are known as ‘rutabegas’, and can be difficult to find. Watermelon radishes are something else entirely, and certainly not suitable for a wannabe Scottish Christmas dinner. You can bet I won’t be repeating that mistake this year! 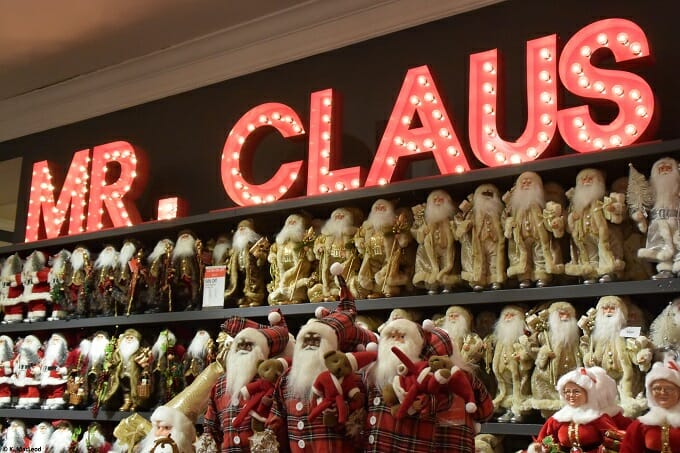 For all the cross-cultural quirks, I love that here in the USA, people go all out at Christmas, just like they do with sports, weddings, and the Fourth of July.

You haven’t seen Christmas decorations until you’ve seen them in the US!  So far I’ve spotted a shivering inflatable Santa in a garden, a sleigh on a porch roof, countless garden nativity scenes, and festive wreaths on nearly every door.

And then there’s New York, which is a simply wonderful place to be at this time of year. Yes, it’s even more crowded and crazy than usual, but somehow that adds to the charm. There are the ice rinks in Central Park and Bryant Park; the intricately detailed department store windows on Fifth Avenue; the entire 9th floor of Macy’s that makes you feel like a five-year-old in Santa’s grotto; and the unusual celebrations, like pop-up Christmas bars and vintage subway cars festooned with Christmas wreaths. 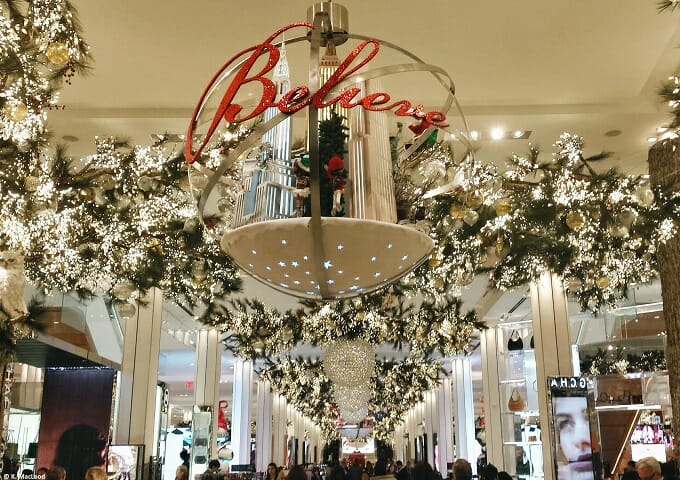 As a British expat in the USA, my experience of Christmas is a bit like my experience of expat life more generally: a mix of wonder and excitement at the new, and a nostalgia for the familiar.

But being someone who loves new experiences, I find it fascinating to watch these different traditions unfold, and enjoy melding the two together in a British-American household.

This year, we’ve had fun choosing which real Christmas tree we wanted (and drove carefully back from the store with it strapped precariously to the roof of the car). We’ve been watching classic Christmas movies, working our way through three (yes, three!) chocolate advent calendars from the UK, and even took in a Scottish American performance of Christmas songs at the Clan Currie’s annual Pipes of Christmas concert on Madison Avenue.

Hearing a pipe band perform O Come All Ye Faithful was majestic (and I may have had to blink furiously to bat away tears when the band went full force on the chorus of Highland Cathedral). A Mod Gold Medalist sang O Little Town of Bethlehem in Gaelic, and there was tartan and tweed in almost every outfit. I have a feeling the Pipes of Christmas will be a new festive tradition for us from now on.

On the day itself, we’ll be bringing together Christmas traditions by eating beef and turkey, pulling crackers and wearing funny paper hats, and going for a Christmas Day walk with a view of the Manhattan skyline to prepare for those chipolatas and Quality Streets. In other words, we’ll be having a very Merry British-American Christmas! 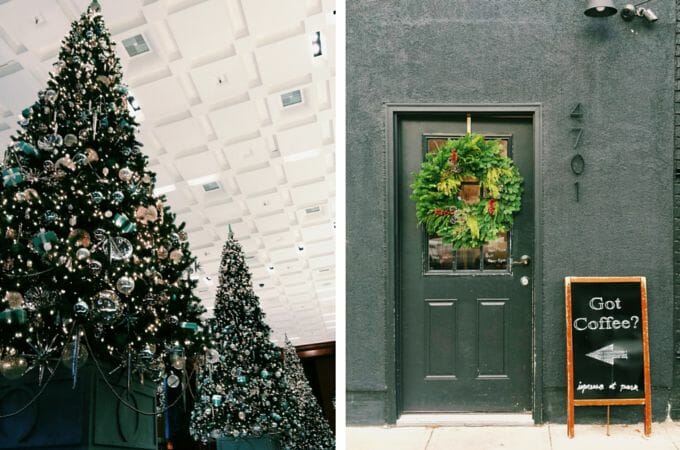 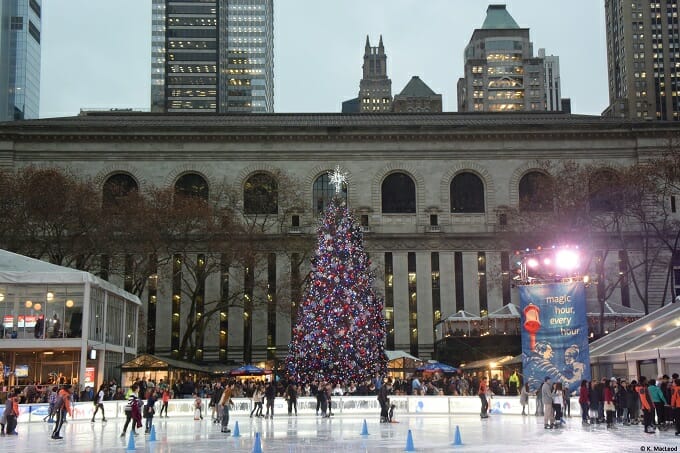 What are your favourite Christmas traditions? Have you ever experienced Christmas in another country? What was it like?

Let me know in the comments below – I’d love to hear from you.

And also: have a very Merry Christmas, wherever you are in the world!

« A Romantic Stay at Peter Shields Inn in Cape May
2015: The Year in Review on Stories My Suitcase Could Tell »