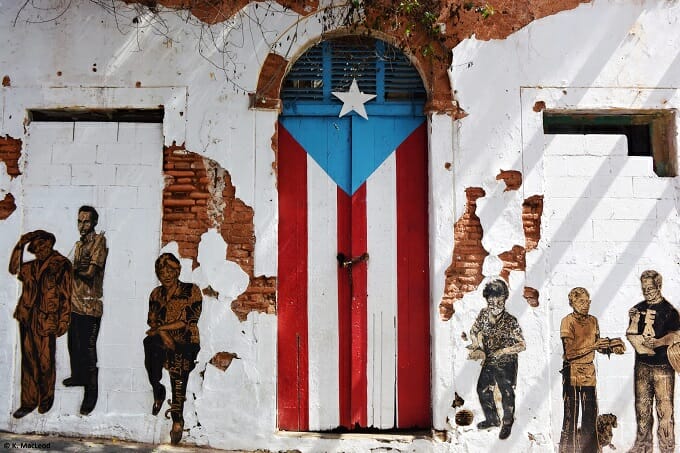 It was all arranged: we would visit the tourist office, collect the map for the self-guided historical walking tour of Old San Juan, and follow the instructions.

Our day didn’t go as planned.

Instead, after just a few steps into the World Heritage Site that is the Old Town of Puerto Rico’s capital, I was mesmerized.  I had never seen anywhere so colourful, and the self-guided tour went out the window in favour of my favourite way of exploring somewhere new: aimless wandering.

We began our unscripted day by sitting down at the counter in Manolin, a diner-style restaurant, for brunch: we had hoped for breakfast, but were too late.  Instead, my husband and I had our first taste of the mighty mofongo.  Mofongo is the island’s signature dish, a fried plantain mash, often served – as we would find out in the coming days – with either chicken or pork, and sometimes slathered with a garlic sauce. I was enamoured from the very first bite.

Fuelled up with mofongo and coffee, we stepped back out onto the cobbled streets of Old San Juan.  At ground level, there are the same tacky souvenir shops you find the world over, but once we raised our eyes skyward, we were rewarded with colourful colonial style buildings in all their (sometimes faded) glory.

Each street seemed brighter than the next – buildings of pink, orange, and green – with heavy wooden doors set into the painted stone.  Windows were thrown open to encourage a breeze, offering a glimpse into the residential life of the city.

We passed pigeons crowded at the Plaza de Armas, and saw stray cats sunbathing in the square outside the cathedral.  We stopped for a refreshing mojito on Calle de San Sebastian; according to the elderly woman behind the bar, it was the place for parties come nightfall. 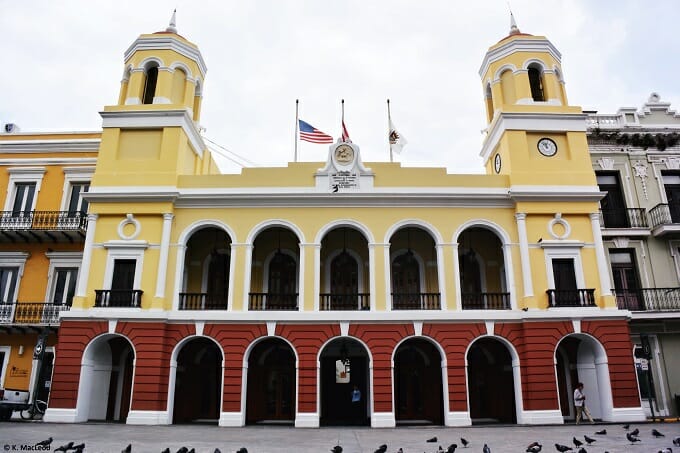 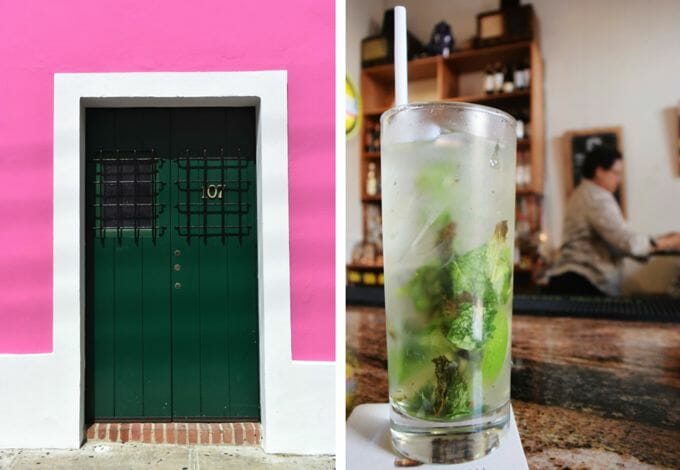 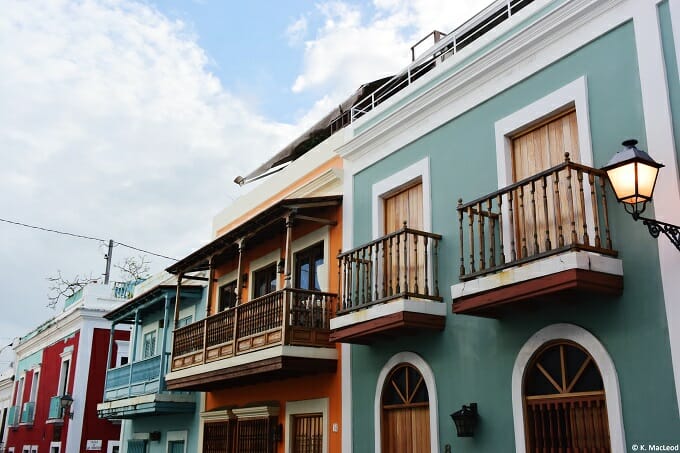 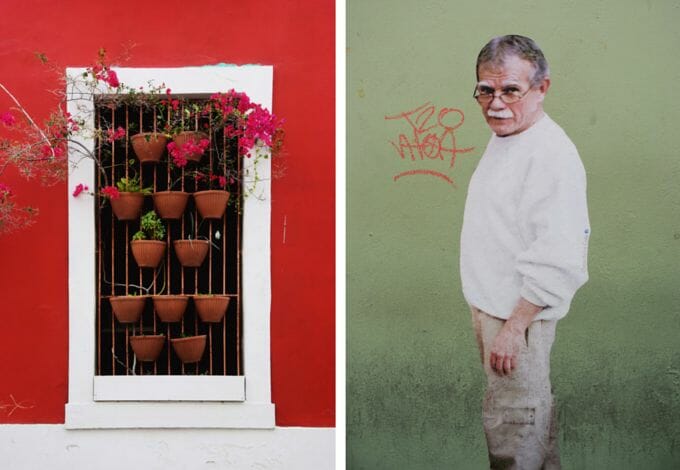 Not quite ready to party, we made our way to the El Morro Fort, or Castillo San Felipe de Morro.

The cliff-edge fortress has been around in some form since the 1500s, and has weathered all kinds of invasion attempts in the years since.

It was incredible to stand at the walls of the fort, to look out across the Atlantic and acknowledge that this was the first stop for European ships en route to their colonies in the Americas. (Apparently the British got into more than a few scrapes with the Spanish here in the 18th and 19th centuries.)  It was equally incredible to see my first iguana on the ramparts, which looked unnervingly similar to the dragons from the fairy tales I read as a child.

After counting more iguanas on the coastal walk by the fort, watching pelicans dive-bomb into the harbour, and giving ourselves something of a work out, we reached the imposing gate that was once the official entrance to the city – and decided a piña colada was in order.

The famous beach cocktail was invented here, but the debate rages on which establishment created the combination of rum, cream of coconut, and pineapple juice first.  We opted for Barrachina, in the old city, rather than the beachside Caribe Hilton, and it tasted as sweet and refreshing as we hoped it would be after our sun-drenched walk around the city walls. In other words, it was the perfect way to end our first day in Old San Juan. 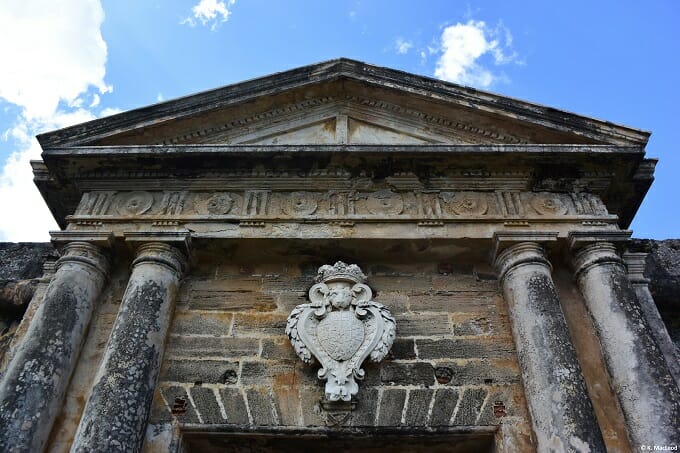 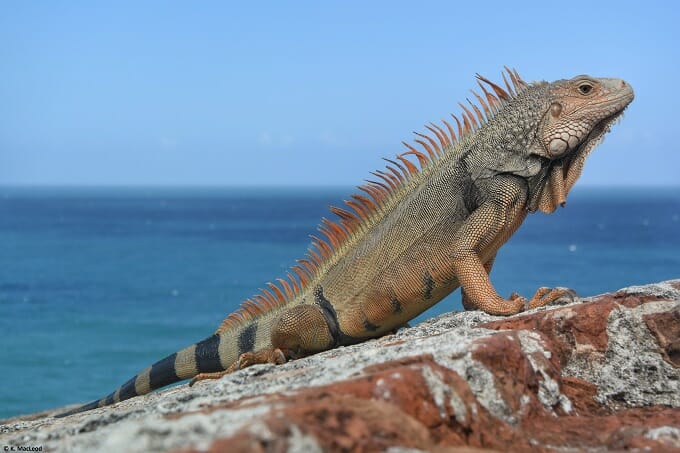 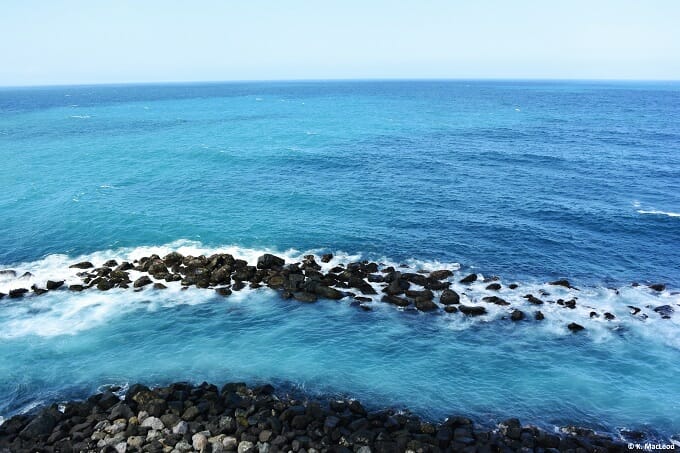 We waited until our last afternoon on the island before returning to Old San Juan for more of the same: wandering without a map.

The streets seemed quieter on a Sunday, the skies cloudier and more threatening than on our first visit; perhaps the threat of rain was keeping everyone else inside?

No sooner had the thought crossed my mind when we found what felt like half the population of Old San Juan.  There was an unexpected blast of music in the silence: following the sound, we found a narrow alleyway filled with people of all ages dancing, drinking, and smoking cigars as a local band played raucously.

The atmosphere at the block party was infectious, as everyone swayed their hips and deftly moved their feet in the same rhythm.  Their moves were much cooler than anything I could muster (although I did give it my best shot!).

By dinner time the party was still in full swing, but we squeezed our way out of the throng to find another edition of our by-now favourite meal: mofongo.  El Jibarito on Calle Sol is famous for the dish, and our final mofongo of the trip – accompanied by some local rum punch – didn’t disappoint.

Watching sunset over the walls of El Morro took the place of dessert, and already I could feel that last-day-of-the-holiday nostalgia creeping in. I wasn’t ready to leave Old San Juan, and the spontaneous holiday atmosphere that comes from putting down the map.

Our time in Old San Juan may not have gone as planned – but it was all the better for it. 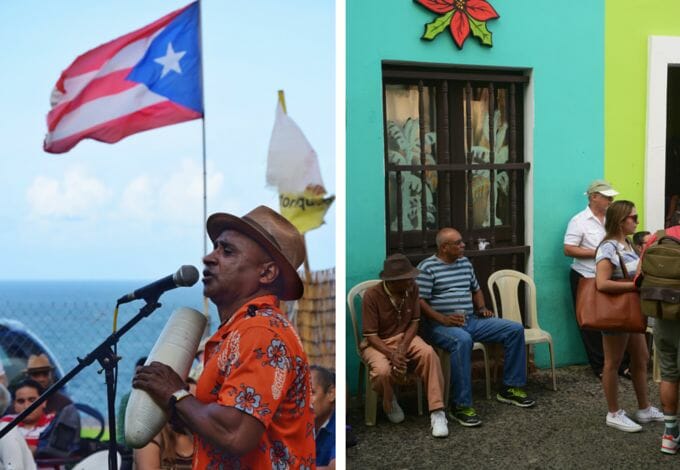 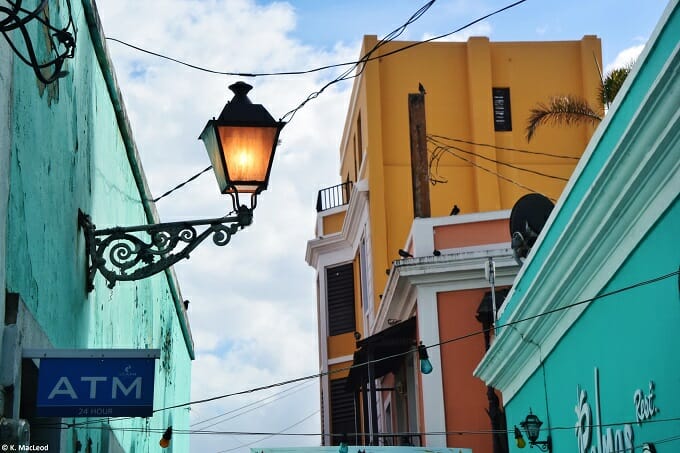 Have you ever been to Old San Juan? Would you explore a new destination without a map or a plan?

In Search of the World’s Best Beach at Playa Flamenco