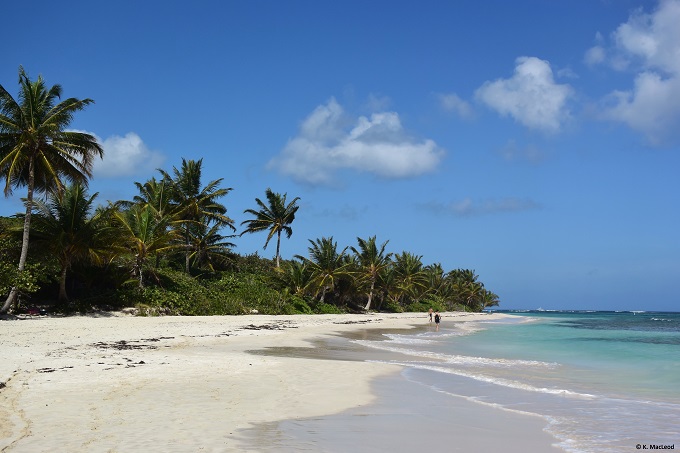 From guidebooks to magazines to blogs, everything I read told me that Playa Flamenco, on the tiny Puerto Rican island of Culebra, was one of the best beaches in the world.

I didn’t believe any of them.

Call me cynical, but growing up in the Outer Hebrides tends to spoil you when it comes to beaches.  Fine white sand and azure seas situated on secluded coastlines are simply par for the course. Luskentyre, Scarista, Eoropie: you could visit a different beach every day for a week and still not see them all.

As a result, I am nearly always sorely disappointed by the supposedly beautiful beaches I come across elsewhere, so I didn’t have my hopes raised too high for Playa Flamenco. Still, I was intrigued – not least because getting to Culebra is an adventure in itself.

Up before dawn on our second day in Puerto Rico, my husband and I set out in our hire car for the east coast of the island.  As we neared the ferry terminal, the highway gave way to the smaller (bumpier) streets of the town of Fajarado, where in my bleary-eyed state I wondered if I was dreaming when I spotted a stray dog hanging out on a street corner with some chickens.

For all the times I’d read that Playa Flamenco was one of the world’s best beaches, I’d read even more that procuring a ticket for the passenger ferry to Culebra was next to impossible.

Tickets can only be bought in person, on the day, from the sole ticket window.  In the event, we were early enough to snag a spot in what would become a very long line.  Well, my husband waited: one of us was made to wait outside, which, given the sunrise sparkling over the harbour, I wasn’t complaining about.

An hour later and two tickets in hand, we had another stretch to wait, this time inside the ferry terminal where we snacked on breakfast empanadas while pigeons flapped near the ceiling and the queue got longer and longer.  By 9am we had set sail, heading through waters once traversed by pirates, to Culebra.  Even as the boat slowly pulled up to the pier I was taken by the blues and greens of the water.  Maybe this beach would be worth the journey after all? 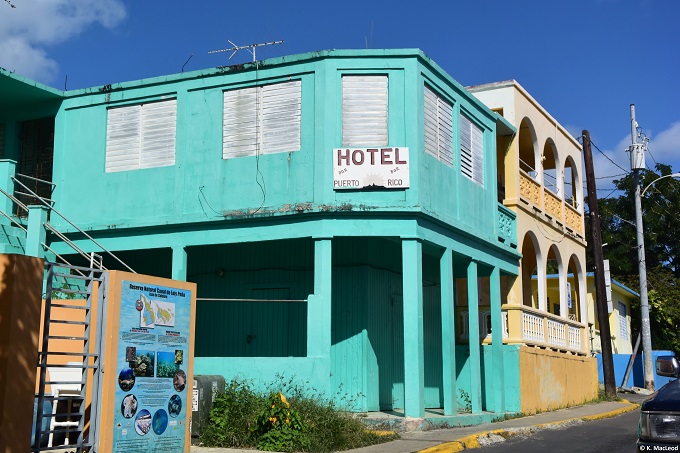 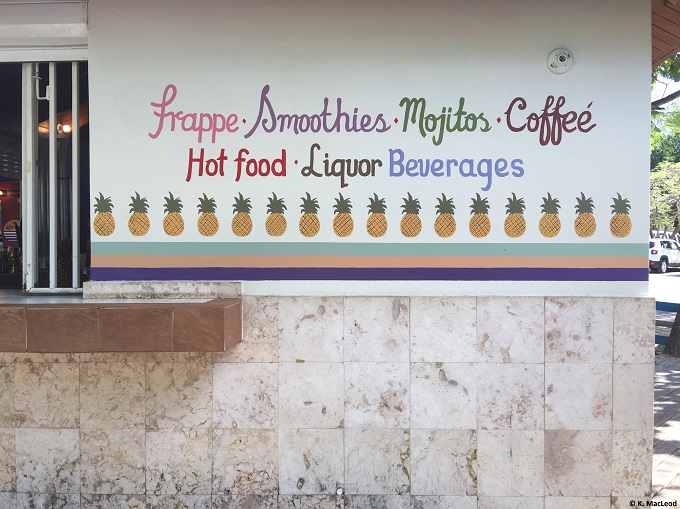 We got acquainted with the main town of Dewey quite quickly – it is, after all, comprised of only a few streets – and relaxed into its hippy, counter-culture vibe with coffee at The Gypsy Cafe before hopping in a mini bus to the other side of the island. Thanks to the thick foliage of trees and palms that line the bay, it wasn’t until we were almost standing in the sand that the playa came into view.

Gobsmacked is one way to describe my reaction.

Speechless is another. The superlative-filled guidebooks had been right all along: Playa Flamenco was one of the most beautiful beaches I had ever seen in my life – maybe the most beautiful (which is high praise coming from a Luskentyre devotee).

The sand was powdery soft and blindingly white, fringed by swaying palm trees that conjured up images you might associate with Robinson Crusoe’s isolated island. It was stunning, but it was the sea I couldn’t stop staring at.

From a slight distance the water was turquoise and jade and green and blue; close up, it was sparklingly clear, so clear we could spot silver fish darting about in their attempts to avoid the beady eyes of the pelicans circling above. Paired with the palm trees and perfect strip of sand, I felt as if I’d been dropped into the pages of a travel brochure, a tropical paradise that only exists on film screens and postcards. 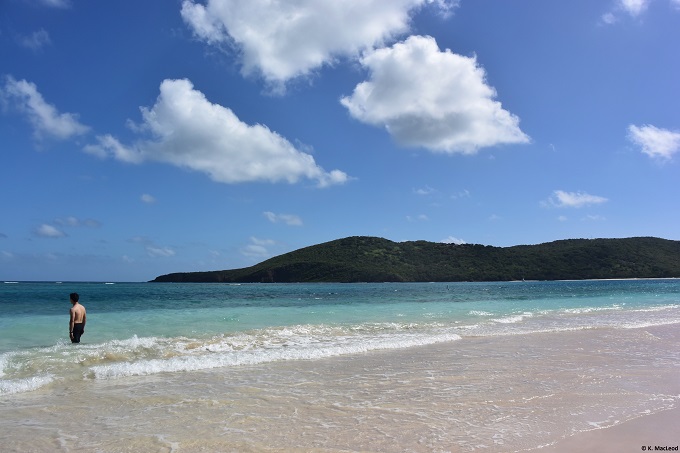 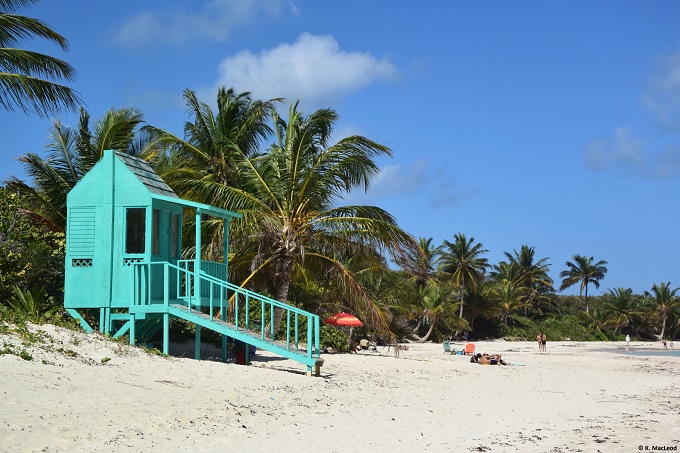 The beach was quiet too: the $100 flight or drawn-out ferry journey must deter most of the would-be beach lovers.

It meant we weren’t fighting crowds as we strolled to the west end of the beach, warm water lapping at our ankles, where we found a physical piece of Culebra’s curious past.

It’s hard to believe now, but for decades, the US Navy used Culebra – and the pristine Playa Flamenco – for military exercises and bombing practice.  In 1971, residents of Culebra began protesting the presence of the navy, and by 1975 they had left (although only to move to the nearby island of Vieques, where shelling continued until 2001).

The old tank at the water’s edge at Playa Flamenco is a reminder of this sore chapter in the island’s history, and something of a tourist site in its own right today. Covered in bright artwork by local artist Jorge Acevedo, the old tank looked somehow as if it had always belonged to the beach (and was being used as a climbing playground by a few hardy children). 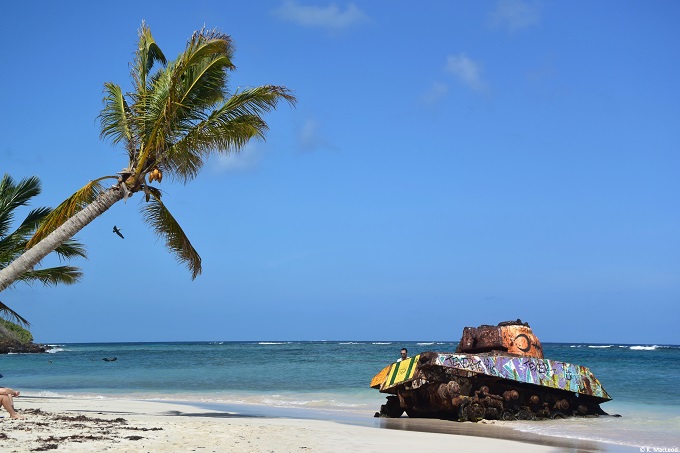 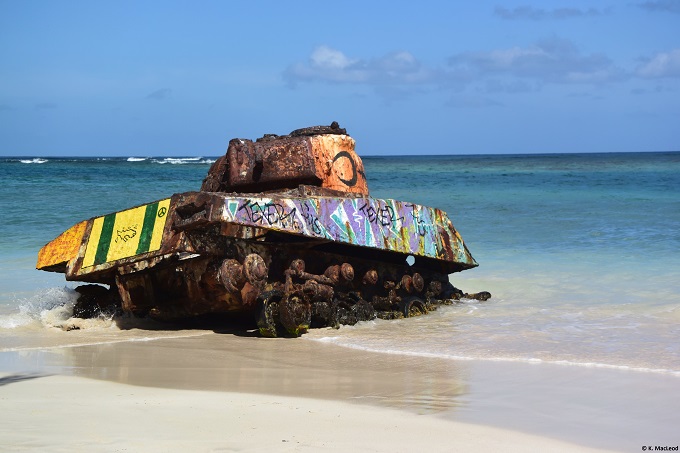 Historical curiosities satisfied, we headed to the food kiosks in the shade of the trees for some lunch: freshly fried calamari and ice cold local beer (cold bottles of Medalla are pleasantly refreshing in 30 degree heat!). There were chickens here too, hopping around under picnic tables, while the famous stray cats lazed in circles of sunlight.

Then it was back to swimming, strolling, and sunbathing on that perfect stretch of sand. We were so utterly relaxed that we committed the biggest beach sin of all: falling asleep in the sun. (Yes, it was stupid. And yes, we got sunburnt.)

Too soon – especially given that unexpected nap – it was time to cross Culebra again to catch the return ferry, crossing back to the mainland as the sun set behind the hills of the rainforest. What a difference a day makes! I’d left San Juan that morning a cynic, and returned a convert, preaching the wonders of Culebra and its magnificent shores. Take it from me: Playa Flamenco really is one of the world’s most beautiful beaches. As the saying goes, sometimes you have to see it to believe it. 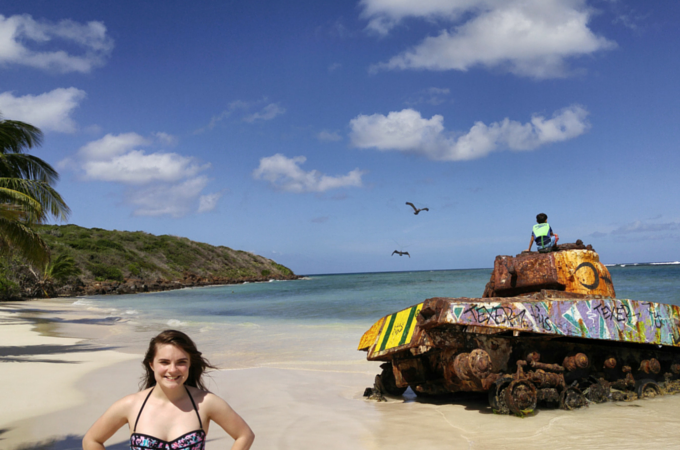 Have you ever been to Playa Flamenco? Where in the world is your favourite beach? Let me know in the comments below – I’d love to hear from you!