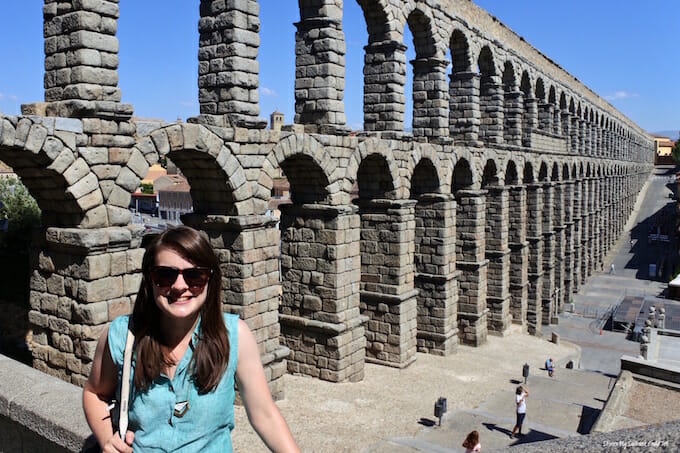 Whether from a distance, or up close, Segovia looks like something out of a fairy tale. The picturesque Spanish town sits in the Castile and Leon region, an hour or so northwest of Madrid, and its beauty and historic importance saw it named a World Heritage City in 1985.

With only an afternoon to explore the winding streets and historic architecture on a day trip from Madrid (and after visiting the Valley of the Fallen), my family and I still managed to see the main sights.

The centre of Segovia is small enough that you can get a feel for its character in a short space of time, so on that note, here are five of the fun tourist experiences we had in Segovia, and that I would recommend – and the one I would be happy to miss next time!

Admire the engineering prowess of the aqueduct. 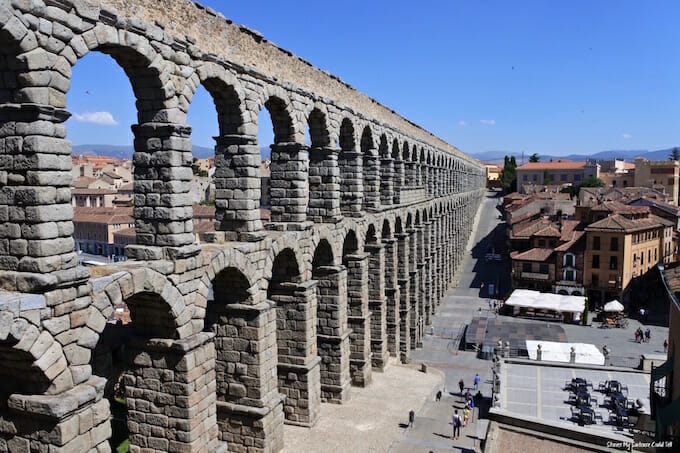 UNESCO have called the city’s aqueduct “the symbol of the city,” and it’s definitely one of the most recognisable sights in Segovia. It was the first part of the old town we came across, after navigating the one-way streets to park our hire car, and it’s impressive: the aqueduct is 894 metres long, with 163 arches, constructed by the Romans in the 1st century AD with no mortar or cement to hold the uneven granite blocks together.

That’s what really impressed me, as I climbed the nearby steps to get an almost-bird’s eye view – the knowledge that this incredible structure had been standing here, without the help of any mortar, for thousands of years. (It certainly puts today’s often boring glass-and-steel construction into perspective!)

Stop for a snack in the Main Plaza. 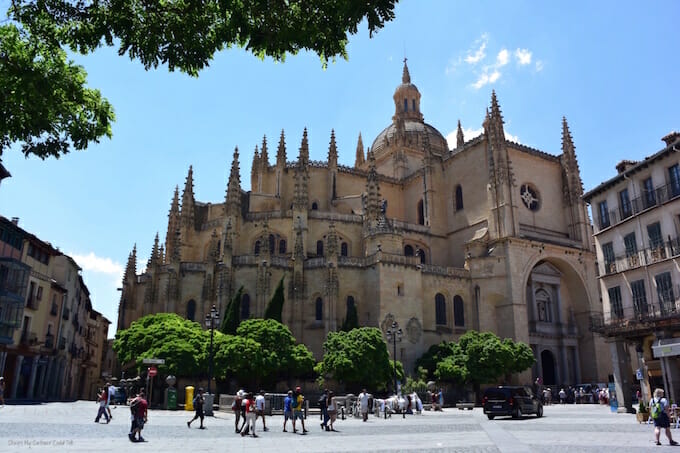 From the Aqueduct, we walked up Calle Real – lined with independent local shops – to the main plaza, Plaza Mayor. This is where you’ll find the gorgeous Gothic cathedral (which took 200 years to complete after its construction began in 1525), and lots of little cafes and restaurants where you can stop for a drink. (Or in my case, an ice cream!) 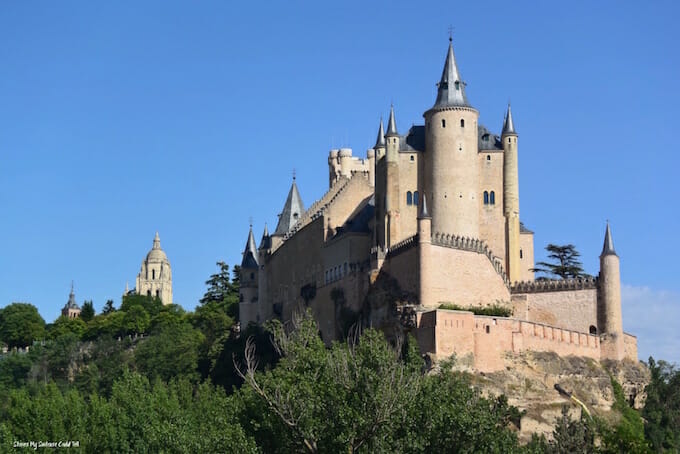 Rumour has it that Segovia’s Alcazar (the name comes from the Arabic al-qasr) inspired Walt Disney’s Sleeping Beauty castle. Whether the whispers are true or not doesn’t really matter, because this fairy tale castle is beautiful either way. A bit like the aqueduct, it’s been around since Roman times, and was rebuilt in the 13th century, only to burn down 1862. Although you’re technically viewing a reconstruction, you can’t argue with how lovely it looks.

Although we didn’t have time to go inside the castle itself, we drove out of the city to see it from afar. It’s only from a distance that you can really appreciate it in all its glory atop the rocky bluff, dominating the little city skyline.

Stand at the edge of the medieval city walls. 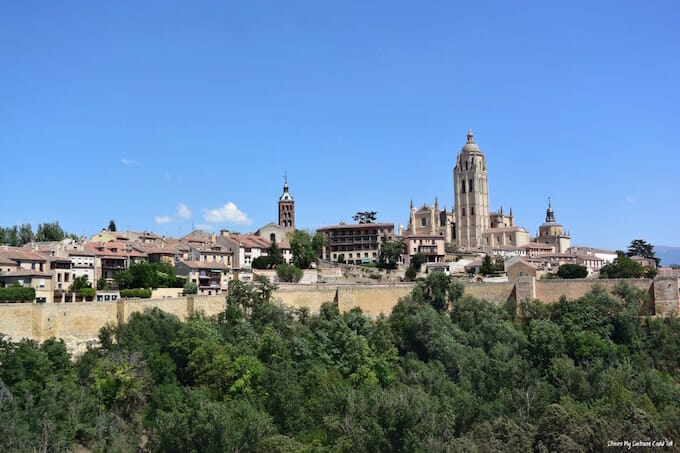 From the Alcazar, we walked back towards the Plaza Mayor via the medieval city walls, and the views were like the picture on a postcard: hills and trees veering off into the distance, the rooftops of Segovia ahead, and the cathedral tower standing tall above them all.

Stroll through the charming side streets. 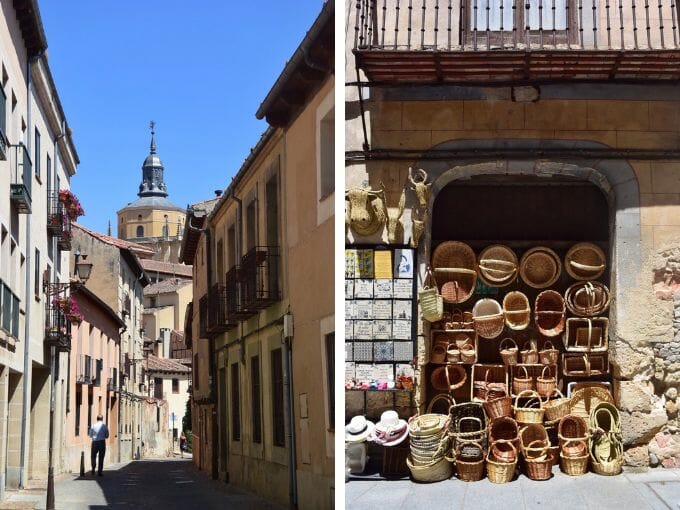 The historic part of Segovia is largely pedestrianized, and the whole place is a World Heritage Site, so every corner is a delight. I admired the detailing on old wooden doors, deliberated over which piece of pottery to buy, and simply people-watched (before everyone went to rest for their afternoon siesta).

But… maybe give the suckling pig a miss!

Cochinillo, or roast suckling pig, is a culinary speciality in Segovia. Everything we’d read about the town said you absolutely could not visit Segovia without trying cochinillo, so we sat down to lunch al-fresco, and eagerly awaited our feast.

Now, I’m quite an adventurous eater, given my time in China, and my Dad will eat just about anything, but neither of us could stomach the roast pork – mainly because there wasn’t actually any pork on the plate, just some crispy skin, a snout, and a whole layer of fat. Maybe we went to the wrong restaurant, or we were unlucky to get a bad dish, but either way, we all agreed we wouldn’t rush to order the cochinillo again!

Suckling pig aside, a day trip to Segovia is more than worth it.

From the dreamy castle to the impressive ancient aqueduct, there’s plenty to see in Segovia on a visit from Madrid – it really does look like a charming town from a Disney fairy tale! 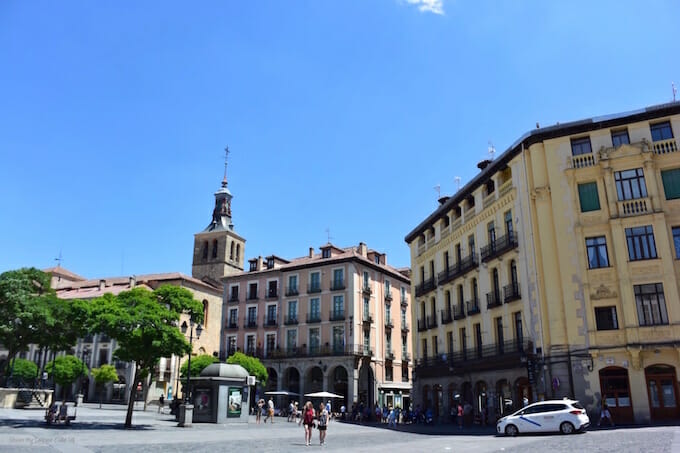 Have you ever visited Segovia, or would you like to? If you’ve been, what would you add to the list?