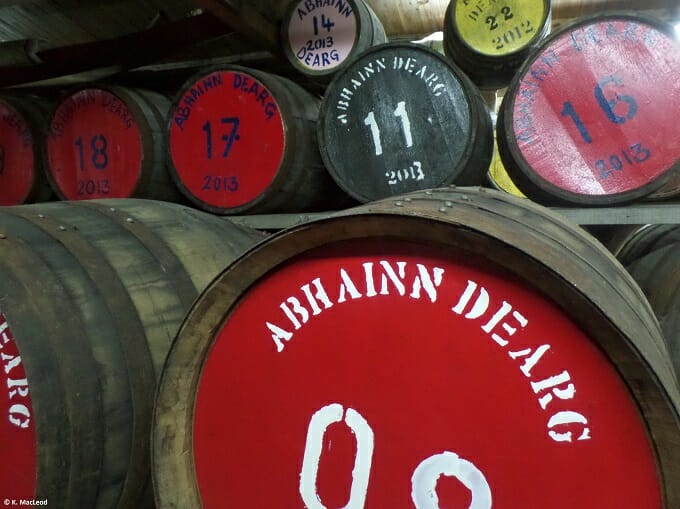 As a child, the journey to Uig on the Isle of Lewis – where we would spend a week on the beach with buckets and spades – seemed like a drive to the ends of the earth, a journey through a landscape that looked liked it had been drawn from Tolkien’s imagination. Uig really is that beautiful, but certainly not that far away.

The last time I visited, back in December, I was making the drive for something different, something decidedly more adult: whisky.  Now, I’m not normally a whisky drinker, but when the Outer Hebrides’ first legal distillery in more than two centures is drawing thousands of visitors each year (4000 in 2014 alone), I can make an exception.

The Abhainn Dearg Distillery sits on the banks of the ‘Abhainn Dearg’ (the red river), a few hundred feet from where the river waters merge with the sea, the end of a tumultuous journey through the empty, brooding hills behind the distillery’s buildings.  The water is essential to the essence of the whisky being made here, as I found out on the dark, dreich day I visited Carnish – the perfect kind of day for a warming dram.

On arrival, my parents and I stepped through what might very well have been whisky remnants, as Marko and Scott welcomed us into the building where they were working on levers and pumps next to the stills.  This is just one of the buildings that were transformed from their previous lives as part of a fish farm, when Mark ‘Marko’ Tayburn took over in 2008 and turned the space into a distillery.

Farm to table may be the latest fad in New York and London food circles, but in the Outer Hebrides it’s simply a way of life, and Abhainn Dearg is no exception.   The whisky here is ‘field to bottle’, beginning its life in the fields of barley at Melbost Farm, near Stornoway.  It’s a journey that takes in the Red River at the distillery’s door; makes its way through the stills, mash tuns, and barrels; and is bottled – by hand – before finally being poured into a waiting Glencarin glass. 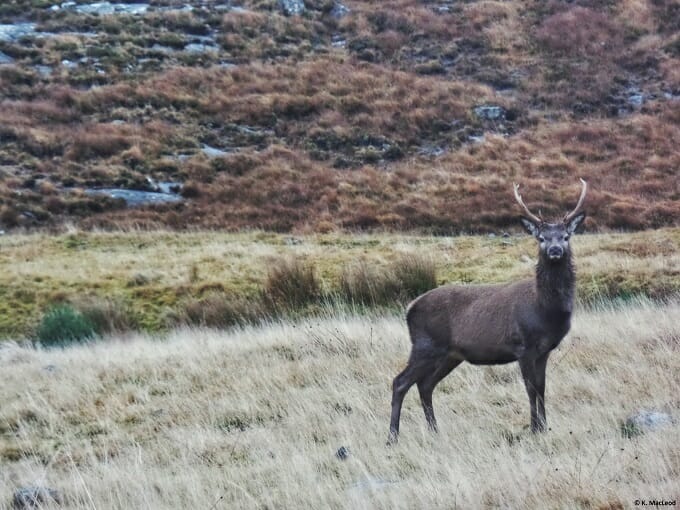 A stag spotted by the road in Uig, where Abhainn Dearg Distillery is located.

The first stage of the journey is the malting process, where the barley is ‘steeped’ in water from the river for 48 hours.  As Scott explained, malting extracts the sugars from the barley, but the germination is stopped by using peat smoke to dry out the barley: not only does the smoke kill the barley, but it adds flavour to what will eventually become the whisky you sip.

Next up comes the ‘mashing’, where the dried barley is milled into grist and put into the mash tuns with more water from the river.  There is absolutely nothing to taint the water that flows alongside the distillery, giving Abhainn Dearg’s ‘uisge beatha’ an added advantage.

The liquid drained off after this step is known as ‘wort’, and, along with yeast, is put into the washbacks (what look like two very large wooden barrels), beginning the fermentation process.  I climbed up the steps to one of them, and gingerly lifted the lid, only to be met with a rush of warm, beer-like air; it’s the distinctive scent of fermentation, where the yeast eats the sugar, turning it into that all-important alcohol.

Back on the ground, it was time to learn about the distillation process, one that takes place in the two large copper stills that dominate the building.  These are ‘hill stills’, local to Lewis, and made in the same style as the illicit stills once used for under-the-radar whisky distilling in places like Gress and Back.  Abhainn Dearg may be the archipelago’s first legal distillery, but that doesn’t mean islanders didn’t enjoy a dram in days gone by – they just kept quiet about it!

Scott points in between the stills, directing our gaze towards the spirit safe, a device which allows distillers to analyse the spirit without coming into contact with it.  It’s a name that harks back to the early days of small distilleries, when only the customs officer was allowed access to the spirit safe, effectively stopping locals from siphoning off the spirit and dodging their taxes.

Having learned the ins and outs of the whisky making process, it was time to taste the finished product.  Abhainn Dearg currently offer a three-year-old single malt, and a spirit, the Spirit of Lewis.  For a whisky to be called a malt, it needs a minimum of three years in the barrel, and the staff in Uig are eagerly awaiting 2018, when the ten-year-old single malt will mature. 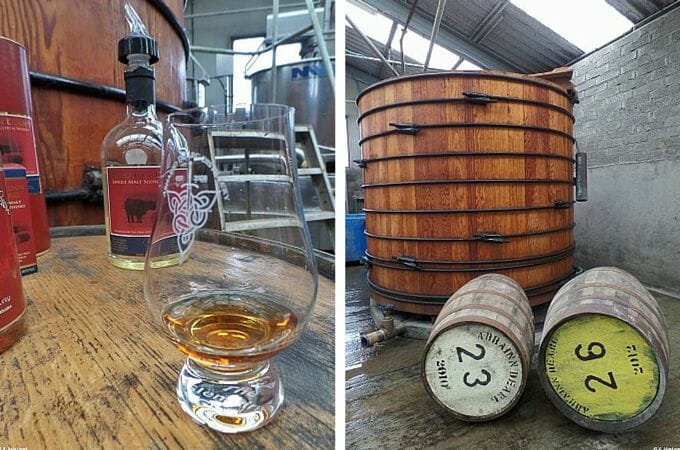 Despite not being much of a whisky drinker, I preferred the smooth malt to the spirit, and on that damp day its warming properties were more than welcome.  After the taste test, we followed Scott across the yard to an outbuilding where the casks are stored.  The ducks quacking outside seemed to want in on the action (or more likely, wanted to dig into the leftovers from the barley).

In fact, the leftovers the ducks were chasing are another example of the local, cyclical nature of the distillery, as the remnants of the barley are mixed with the pot ale and fed to the cows.  Waste is not an option at Abhainn Dearg – unless, of course, it is the ‘Angel’s Share.’

The Angel’s Share is the gorgeous name given to the whisky that evaporates from the barrels during storage.  American bourbon and European sherry casks are used at Abhainn Dearg, and they are piled high, lined up along the walls, each one brightly coloured with hand painted brush strokes indicating their age. There’s even a cask sitting near the door that was crafted from the Monaco, a ship that sat derelict in Stornoway harbour for years.

It wasn’t until last year that the official Abhainn Dearg shop opened, complete with life-size carvings of the local Lewis chessmen and a bar built from old whisky barrels.  Before then, you could purchase your whisky from the house on the property; I once visited when Marko and his team were sitting down to a lunch of kippers in the kitchen.  The house is where the whisky is bottled by hand, although a new bottling room adjacent to the shop is currently under construction.

The whisky at Abhainn Dearg is as local as it gets, and so is the visitor experience.

What I loved about the Uig distillery was how real it was: there was no advertising spiel, no glossy packaged tour – just an insight into the inner workings of an island business owned and run entirely by the locals who live here.  At Abhainn Dearg you’ll find plenty of heart, lots of character, and some damn good drams. 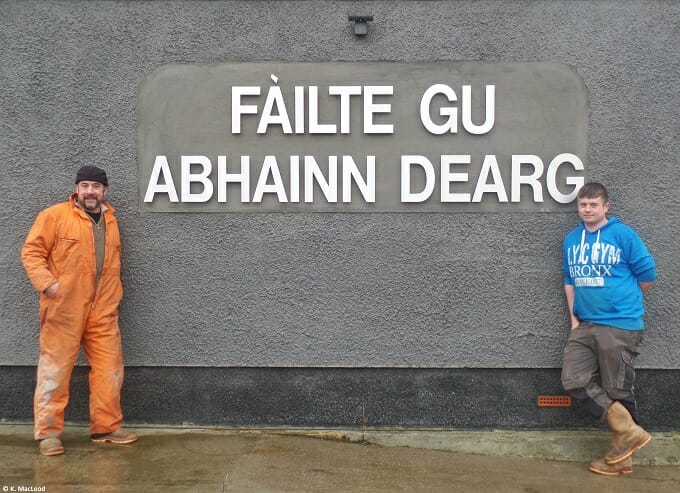 Marko (left) and Scott (right) who welcomed us to the distillery on a wet winter’s day!

Many thanks to Scott for his fun and informative tour of the distillery!

Abhainn Dearg is open 11am-4pm (closed for lunch from 1pm-2pm) from Monday to Saturday during the summer, and Monday to Friday in the winter.

Have you ever been to a whisky distillery? Would you like to visit one?