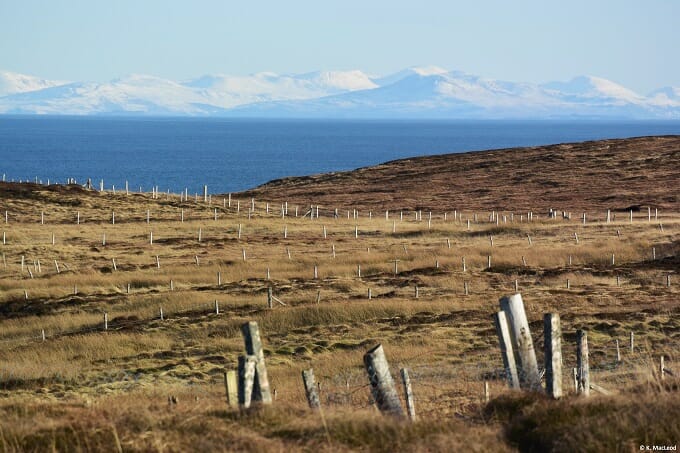 On the drive from the town of Stornoway to the village of Tong on the Isle of Lewis, the view laid out before you is beautiful: low-lying moorland, swathes of white sand at low tide, the blue waters of Broad Bay, and past the nearby peninsula of Point, the sight of the mountains of the Scottish mainland in the distance.

It would have been a familiar sight for Mary Anne MacLeod, who grew up in a croft house in Tong in the 1920s with her parents and siblings – and whose son, Donald John Trump, is currently hurtling his way towards becoming the Republican nominee for President of the United States of America.

Everyone here knows that Domhnall Iain, as Trump would be called in Gaelic, has close island connections; they’re just not particularly interested. They’re certainly not interested in sharing their thoughts with the journalists who routinely perpetuate inaccurate stereotypes about their home.

It’s a connection that’s been brought into the spotlight this week, after a poorly researched and apparently hastily put-together programme was aired during BBC Newsnight.  When their culture correspondent Stephen Smith flew more than 600 miles to Lewis from London, he found that few people were willing to speak to him on camera about the Republican frontrunner. (Hardly surprising, given the usual patronising media narrative about the islands.)

The result? A short segment that rehashes old news stories about Trump’s Lewis connections and marries them to a litany of well-worn, negative stereotypes about the Isle of Lewis.  Needless to say, a lot of islanders – myself included – were angry.  Most of all, I was disappointed: I expected more from the BBC.

The segment started with the Father Ted theme tune and ended with a rainbow and a leprechaun joke.  Not only are these lazy stereotypes, but they’re lazy stereotypes about a completely different country.  In case Newsnight missed the memo, here it is: the Isle of Lewis is in Scotland, not Ireland.

Then there was the usual nonsense about Lewis being ‘wind-swept and God-fearing’ (I’ve written scathingly about that one before), and a complete mangling of the Gaelic language, which could have been easily avoided by a quick conversation with just about anyone he met.

BBC journalists perfect their pronunciation of cities in the likes of Syria, China, and Nigeria – why not the towns and villages of the Isle of Lewis?  It was seemingly too much effort for a culture journalist on a mission to uncover the “deeply enigmatic narrative of [Trump’s] maternal line.”

The panoramas of the island left a lot to be desired too. There was no beautiful view of Broad Bay, mentioned above; no shots of the nearby beaches of Coll, Vatisker, or Gress; no colourful streets of Stornoway. Instead, viewers were treated to the sight of a plastic bag stuck on a fence, and a rural bus shelter. Is that really the best the BBC could come up with on an island considered one of the best in Europe?

Stereotypes aside, what did leave the young Mary MacLeod moving halfway across the world? The Newsnight piece offered zero context, and repeated the story told in the likes of the New York Times and The Telegraph, the one where Mary MacLeod met Frederick Trump while on holiday in New York City in the 1930s.

I’m not sure where the story originated.  Maybe it is true, but one only has to look at the economic conditions of Lewis in the post-World War I years to realise that the idea of a holiday – to Glasgow, let alone New York – is so unlikely it’s almost laughable.

Our grandparents’ generation were lucky if they got the chance to visit Stornoway on holiday, so the suggestion that children of crofters and fishermen could go “on vacation” to the other side of the world in the late 1920s is questionable at the very least.

What was happening at that time was mass emigration.  In the First World War, “more men enlisted from Lewis, as a proportion of the population“, than anywhere else in the country. The loss of so many men, coupled with the sinking of the Iolaire in 1919, took its toll on an island already dealing with poor social and economic conditions.  It’s unsurprising, then, that so many young people left in search of better opportunities.

There were plenty of Leodhasachs in North America in the 1920s and 30s – and more than a few from Mary Anne’s home village of Tong.  My good friend’s great-grandmother moved to New York from Tong in 1921, where she met and married a fellow islander.  The couple eventually found themselves back in Tong, where they opened the village post office.

Another friend’s great aunt emigrated to New York with a number of young women from Tong, and rumour has it Mary Anne MacLeod was among this group of friends who travelled the Atlantic together. My friend’s great aunt spent most of her life working as a live-in nanny, both in Manhattan and across the Hudson in New Jersey, before returning to Lewis in her late retirement.

Whatever the detail, it seems a much more likely story that Mary Anne MacLeod emigrated to New York like the rest of her friends and fellow islanders, all searching for better opportunities. It was there she met Mr. Trump, who she married in 1936, at the age of 23.

I’d love to know what happened to her when she arrived. What awaited her on arrival in New York Harbour? How did she feel about adjusting to life across the pond? Did she ever experience cianalas, that curse of islanders abroad?

I’d love to know these things not because her surname was Trump, but because I’ve made that same move, albeit almost a century later and in very different circumstances. So have many, many others: Mary Anne was just one in a long list of islanders leaving home for the far reaches of the globe.

Some left by choice, and others were moved by force (see: the Highland Clearances).  Some returned, and others never saw these shores again.  Delving into that immigrant past, through the lens of Mary Anne Trump’s story, would have made a far more interesting BBC news piece than one featuring poorly thought-out jokes about leprechauns. (The former is a actually a feature I’ve been researching myself.)

While Mary Anne’s famous son may not seem to be all that interested in the beautiful island of her birth, or the lovely village of Tong, she herself returned often before her death in 2000. Her daughter, Maryanne Trump Barry, still visits their family in Tong, and last year she donated £150,000 to a local care home in Stornoway.

None of this is mentioned in the Newsnight piece.  The report added nothing to the story of Mary Anne MacLeod Trump, but plenty to the long tradition of lazy journalism about the Isle of Lewis and the Outer Hebrides as a whole.

Sadly, being treated with disdain by the media is simply par for the course if you happen to come from the Outer Hebrides. And with Donald Trump in the (presidential) picture, sensationalist headlines and stories unfortunately seem to matter more than the reality.

Did you see the Newsnight piece about Donald Trump and the Isle of Lewis? What did you think of it?

« Why I’m Excited About Visiting the Outer Hebrides
What Happens When An Expat Goes Home? »