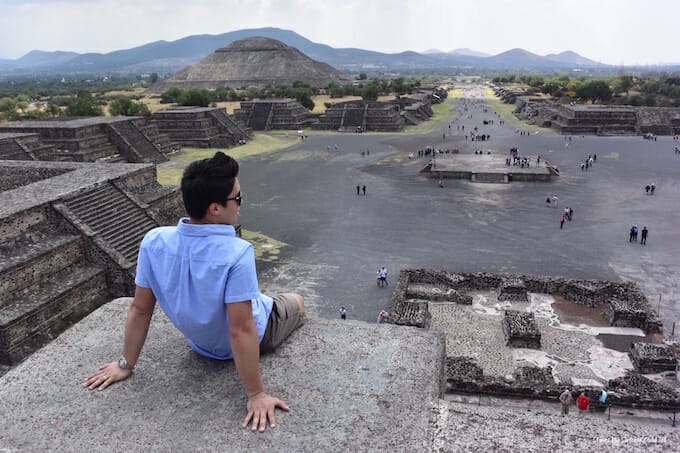 Initially, I wasn’t that excited about visiting Teotihuacan, the ancient city and World Heritage Site an hour outside Mexico City.

Having seen Chichen Itza, one of the new Seven Wonders of the World, during our visit to the Riviera Maya, and having (with great difficulty!) climbed the central pyramid at Coba in the Yucatan region, I was doubtful that Teotihuacán would have anything different to offer. Once you’ve seen one Mexican pyramid, you’ve seen them all – or so I thought.

With a week in Mexico City stretching out in front of us, Mr. Stories My Suitcase Could Tell and I knew we wanted to squeeze in a day trip or two, and Teotihuacan – just an hour’s drive away – was an easy one, which is how we found ourselves one morning on a bus slowly making its way through traffic to the edges of the city.

The bus journey was an experience in itself.

I love peering out the window and seeing what a new city’s streets and outskirts hold. At first we passed taco stands, bustling shops, and cafes, before they gave way to industrial parks, and poorer suburbs where colourful homes were built crowded on hillsides.

Just as flashes of greenery were beginning to appear outside the window, the bus came to an abrupt stop, and a shout of “Los piramides!” announced to us and a handful of fellow tourists that we had arrived at the historic site.

After buying our tickets and making our way through the entrance, we realised we had seriously underestimated Teotihuacan: the place was enormous! 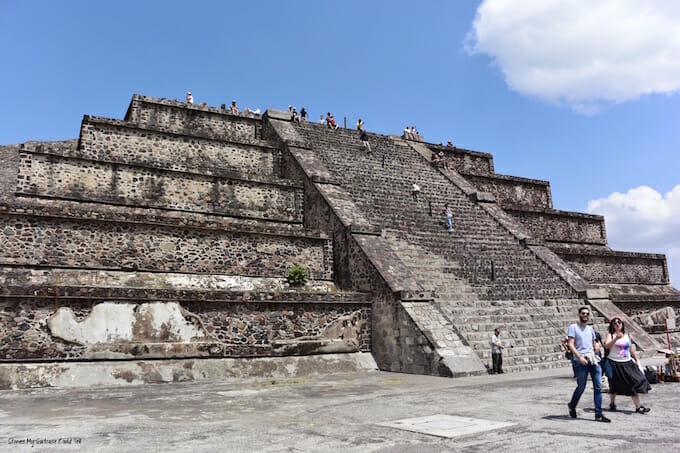 Unlike Chichen Itza or Coba, where jungle vines and tree limbs encroach on the former cities, Teotihuacan is open to the sky, pyramid after pyramid lined up along a stretch of dusty road that was known in Mayan times as the Avenue of the Dead.

Before the 1400s, this was the largest city in the Western world, and while historians aren’t entirely sure who built it, they believe it was the Aztecs who gave the city its name, which means ‘the place where the gods were created.’

At nearly 70 metres tall, the Pyramid of the Sun is one of the largest pyramids in the world.

From my position at its base, it looked very large indeed. I was nervous about climbing its steep central staircase, but I knew I could do it: my nerve-wracking experience at Coba proved it. So without making the same mistake again (looking down while still only halfway through the climb), I persevered, and made it to the top, feeling triumphant and more than a little exhausted.

The view was spectacular, stretching to hills on the horizon and giving us another angle from which to view our next challenge, the Pyramid of the Moon. What goes up must come down, though, and after we’d admired the view (and I’d recovered from the climb), we began the slow descent down stairs that have been used for thousands of years. 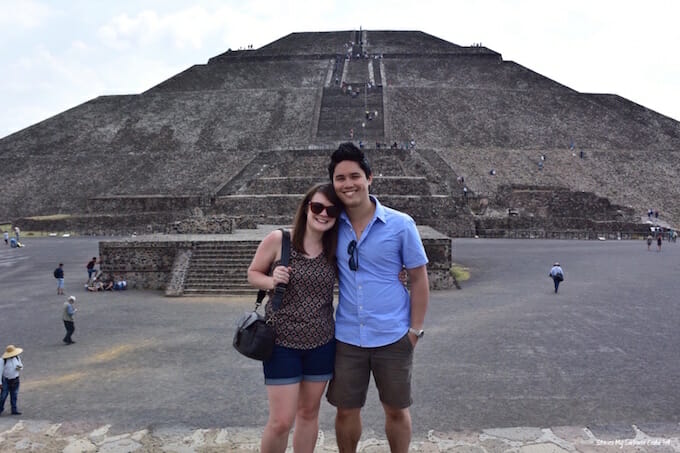 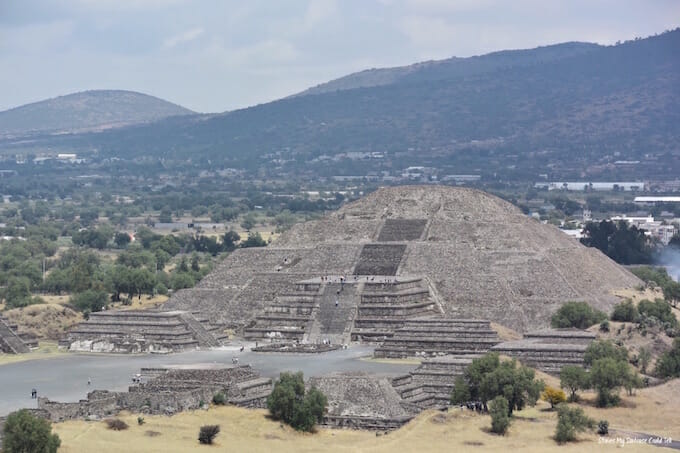 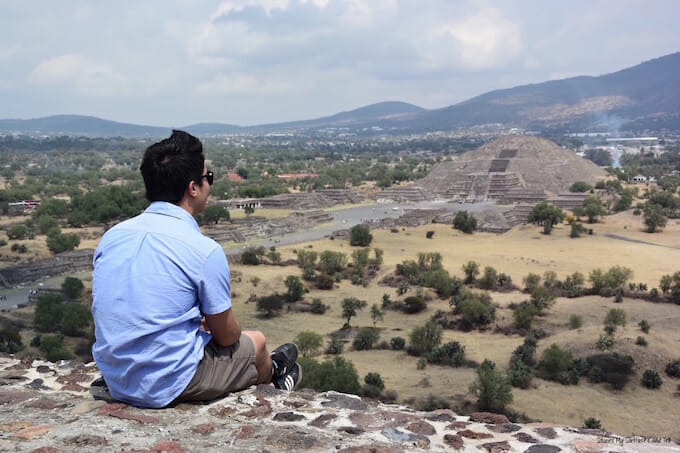 Back at ground level, we took our time walking through the city.

We noticed a panther mural hidden underneath a protective awning, and stray dogs skirting from one shaded patch of dust to another. But my attention was on the pyramid in front of us, as I psyched myself up for the challenge.

In the end, Mr. Stories My Suitcase Could Tell looked unruffled after climbing the second pyramid of the day. I, on the other hand, looked very much like I had climbed nearly 46 feet in intense heat, and flopped unceremoniously onto the ground to catch my breath while everyone around me posed for Facebook photos.

But if I’d thought the view from the Pyramid of the Sun was spectacular, this one was even more impressive, and most definitely worth the (second) climb.

The Avenue of the Dead stretched straight out in front of us, highlighting the ancient city’s symmetry, and the clouds parted at just the right moment to bathe the Pyramid of the Sun in a midday glow (I thought there must have been a reason for its name!). It was incredible; I could have stayed up there for hours, watching the shadows scurry over the ancient stones. 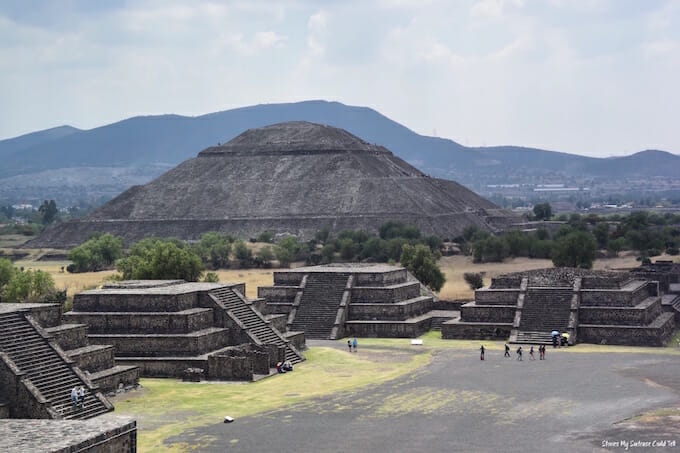 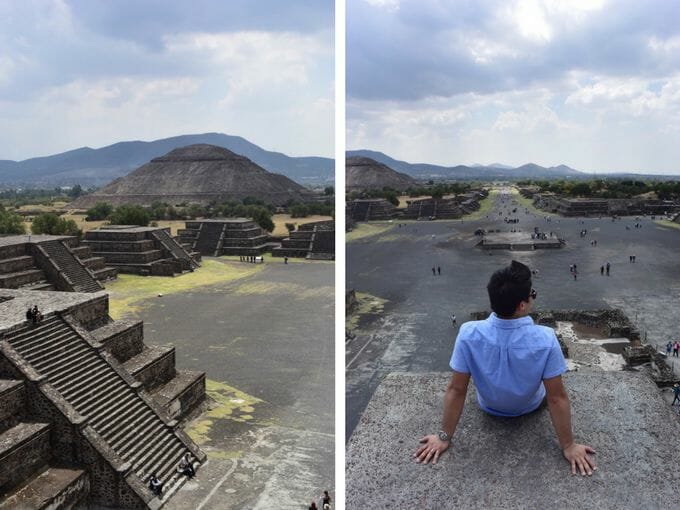 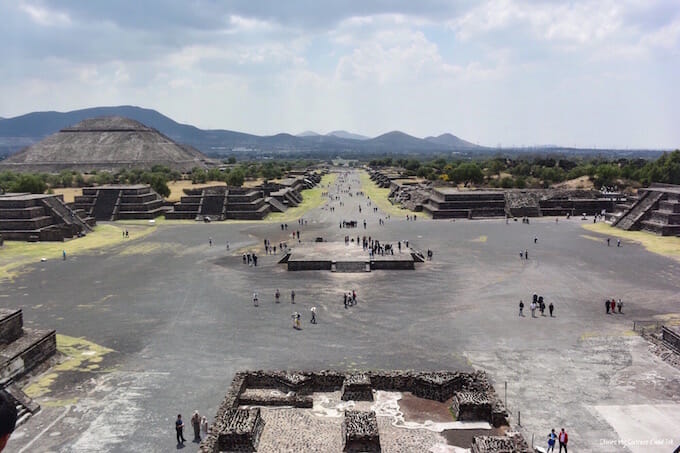 Our day trip to the Teotihuacan pyramids reminded me that when travelling, you always have to expect the unexpected.

I set out on the bus that morning looking forward to the day ahead, but not feeling particularly excited. In the end, Teotihuacán ended up being one of the most impressive historical sights I’ve seen, and well worth our last-minute day trip from Mexico City.

How do I get there?  We took a local bus from the northern bus terminal in Mexico City, Terminal Central del Nort, to the south west entrance of the site. A return ticket in March 2018 was about $7 USD each. Look for the stand for the bus company ‘Autobuses Teotihuacan’ (there’s a pyramid sign next to the name, so you can’t miss it), and keep in mind that the buses leave both the bus station and Teotihuacan every 20 minutes.

How much does it cost?  Tickets to get into the Teotihuacan site cost about $4 USD, and can be bought at any of the entrances.

What should I bring with me?  Lots of sun cream and lots of water! There’s very little shade at Teotihuacan, and it gets very hot, so make sure you’re well prepared (and don’t end up sunburned like me!). Bring snacks too, as once you’re inside the gates there are very few food options, although there are restaurants near the site.

Have you ever visited the Teotihuacan Pyramids, or would you like to? Let me know in the comments below – I’d love to hear from you!