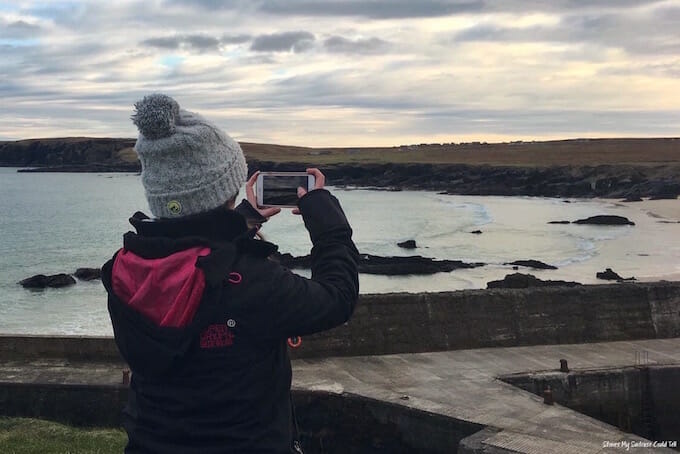 It was March 2016 when I first returned home to the Outer Hebrides, 18 months after moving to the USA and being prohibited from travelling. I expected the experience to be revelatory, and in the end it was, but not for the reasons I had anticipated. Returning again a year later, to spend a week in Lewis and Harris, I wondered what would have changed.

My morning still began with a coffee at the kitchen table, next to the window with views over the Minch to the mountains of the Scottish mainland. Toasted Stag Bakery bread was still my first choice for breakfast, if we weren’t making a pit stop at Café Rubh for a potato scone and black pudding roll on route to Stornoway.

I still stalled my Mother’s car at the roundabout, and still couldn’t resist popping into An Lanntair to check out the latest exhibition. I even spent a Saturday evening reliving my teenage years, listening to Willie Campbell singing in one of the local pubs, and remembering when my friends and I were the 18-year-olds dancing to Abba covers in front of the makeshift stage. (The nostalgia was so intense it felt almost physical.)

Of course, changes have taken place in my absence.

Babies have been born, vows have been made, new shops have opened and old ones have closed, but the laughter and conversation with family and friends (not to mention colleagues) is always there, as normal and fluid as if our time apart has been a day, not a year.

This year, though, one thing was noticeably different: the weather. Spending a week in Lewis and Harris in the depths of winter conjures up images of horizontal rain, gales, and cancelled ferries. To my surprise and delight, the sun was shining and the skies were blue every single day for a week. Seven straight days of sunshine! In February! (As you can see, I still haven’t quite got over my good fortune…)

Glorious sunshine meant I spent my days drinking in as much of the island as I could.

Driving north to Ness and south to Harris; walking in the Castle Grounds, visiting the new Museum nan Eilean, and strolling through Stornoway; not to mention eating all my favourite foods in Delights, 40 North, and the North Harbour Bistro.

As always, my visit felt too brief, my departure accompanied by the tinge of disappointment in knowing that I hadn’t seen even half the people or places I wanted to. But being more settled in my second home (hello, NYC!) means goodbyes are not quite as hard as they once were.

Besides, it’s not goodbye, but see you soon – I’ll be back in the Outer Hebrides in the summer, after all!

Have you ever moved away from – or returned to – somewhere you call home? What was it like? Let me know in the comments – I’d love to hear from you!

« A Week in Lewis and Harris – on Video!
My Weekend in the North of Scotland: Caithness, Sutherland, and the NC500 »